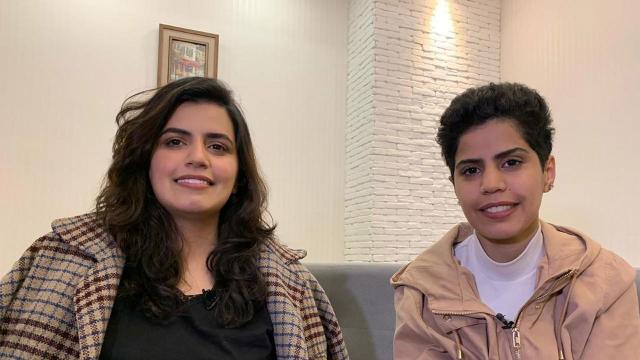 CNN — Two Saudi sisters who planned their escape for almost five years and are now seeking asylum in the Republic of Georgia have revealed their identities in a plea for international help.

Wafa Zayed al-Subaie, 25, and her 28-year-old sister, Maha allege that they were trapped in their own homes and suffered verbal and physical abuse from their male relatives.

They are now in Tbilisi, Georgia, and after nearly two weeks of trying and failing to get asylum in another country, have gone public with their case.

"We are in danger we need your support to deliver our voice," Maha said in a video post. "We want protection we want a country to welcome us and protect our lives, please help us."

The pair also posted photographs of their Saudi passports to prove their identity and in hope of bolstering their case. The sisters believed that their passports had been "suspended" when they attempted to apply for a visa to travel to Australia and received an error message.

CNN has contacted the Consulate of Saudi Arabia in Istanbul for comment on this specific case, but so far these queries have gone unanswered.

State-run Saudi Press Agency (SPA) reported on Friday that the Royal Embassy of Saudi Arabia in Georgia had acknowledged the names and presence of the women in the country, and refuted allegations that their passports were "canceled."

A day after the sisters went public, Georgian law enforcement officers tracked them down and CNN witnessed the moment that the terrified sisters were questioned by police.

The women told officers that they fled Saudi Arabia due to suffering abuse and feared for their lives if their family members found them and were able to forcibly deport them.

Georgia's Internal Affairs Ministry then released a statement saying that the purpose of their visit "was to offer assistance and security guarantees," acknowledging the sister's fears and clarified that no other members of their family are in Georgia.

By traveling independently, in a bid for more rights and to escape abusive conditions, however, the sisters may have committed a crime under Saudi's strict guardianship system. "I chose, fully willing and capable, to leave Saudi Arabia. I have committed no crime. What is my crime?" Wafa told CNN in Georgia.

In Saudi Arabia, a male relative controls a woman's life from birth to death, effectively treating all women as permanent legal minors. The sisters blame the Kingdom's guardianship laws for enshrining their abuse and protecting their abusers, and say local authorities were unable or unwilling to help.

"My father would hit me in front of my child," Maha claimed through tears over her 9-year-old son who she says she was forced to leave behind. "This was my biggest motivation for leaving. I lived under the mercy of my male relatives. I prefer death to this life."

So the sisters made a daring escape from a country where women are punished or even disappeared for running away, according to human rights groups.

They now hope to generate the same attention -- and eventual outcome -- as a similar case in January, when Saudi teenager Rahaf al-Qunun fled to Thailand to escape her allegedly abusive family. Qunun and her supporters drew global attention to her case through a social media campaign launched mostly on Twitter.

The 18-year-old documented her arrival and subsequent detention in Bangkok on her smartphone, creating new Twitter and Periscope accounts where she received a deluge of supportive messages.

On January 11, Canadian Prime Minister Justin Trudeau announced that his nation would grant her asylum.

The women's plight comes amid an increase in runaways from Saudi Arabia using social media to appeal for help as they leave a life of oppression.

According to the UNHCR's latest public records, Saudi refugees and asylum-seekers totaled 2,392 in 2017. Five countries hosted the majority of these Saudis: the United States (1,143), Canada (453), Australia (191), the United Kingdom (184) and Germany (147). But the sharpest increase in Saudi refugees and asylum-seekers occurred after 2015, the year Prince Mohammed bin Salman, then 29, emerged in the Kingdom's political scene.

Analysts and activists say that the amount of women seeking asylum has been compounded by Crown Prince Mohammed bin Salman's campaign to stamp out dissent in the Kingdom.

In recent years, he has ordered the rounding up of scores of high-profile clerics, analysts, businessmen and princes, as well as women's rights defenders who were allegedly tortured.

The guardianship system makes fleeing the Kingdom a difficult task for women who often have to steal their own passports away from male relatives, and even change travel permissions on a guardian's cell phone from a Saudi government mobile app called Absher.

Absher is a Saudi government e-portal where users can access an array of government services, including a feature for male guardians to decide whether their dependents can travel abroad and the parameters around their travel plans.

"You only live once and this is not a life," Wafa told CNN. "I must ask permission for anything -- to get a job, move to a new place, get married. These choices are our most basic rights and we don't have them.

"If we ever go back to Saudi Arabia we will be killed or taken to a women's prison. There are no other options."