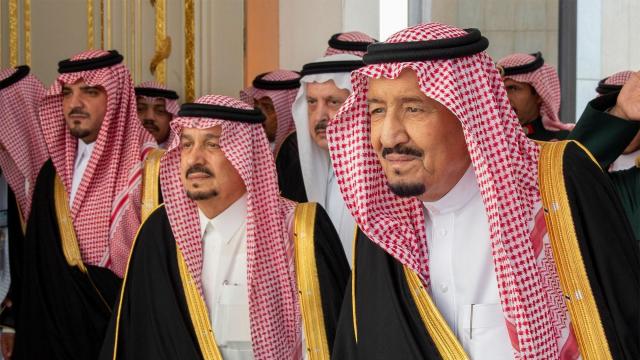 BEIRUT, Lebanon — King Salman of Saudi Arabia on Monday stood by his son, Crown Prince Mohammed bin Salman, avoiding any mention of the international outrage toward the kingdom in his first public remarks since Saudi agents killed the dissident journalist Jamal Khashoggi in Istanbul in October.

The echoes of that killing continued to spread Monday, with Germany imposing sanctions on 18 Saudis suspected of involvement and freezing arms exports to Saudi Arabia. And the Turkish defense minister suggested that Khashoggi’s killers could have left the country with his body.

Khashoggi’s killing inside the Saudi Consulate in Istanbul has become a lightning rod for Western criticism of Saudi Arabia, its human rights record and the leadership of Crown Prince Mohammed, the kingdom’s day-to-day ruler. A growing chorus of current and former Western officials have concluded that an operation as elaborate as the one to kill Khashoggi could not have been carried out without the crown prince’s knowledge, and U.S. officials told The New York Times and other publications last week that the CIA had concluded that the crown prince had ordered the killing.

Saudi officials have vehemently denied that the crown prince had any involvement in the death of Khashoggi, a Virginia resident who wrote columns for The Washington Post that were critical of some Saudi policies. They have portrayed the killing as a result of a rogue operation to return Khashoggi to Saudi Arabia.

The heightened scrutiny of Crown Prince Mohammed, 33, has caused speculation in some quarters that he could be pushed aside. But in Saudi Arabia’s absolute monarchy, only his father has the authority to do so and in Monday’s remarks he showed no intention to sideline his son.

In his annual address to the Shura Council, the kingdom’s advisory assembly, the 82-year-old monarch stuck to general statements on official Saudi policy, calling on the world to stop Iran’s nuclear program, press for political solutions to the wars in Syria and Yemen and keep up the fight against terrorism.

If the king made any reference to the aftermath of Khashoggi’s killing, it was done obliquely.

He praised the country’s public prosecutor, whose office is handling the official Saudi investigation into the killing. Last week, the prosecutor’s office said it had filed criminal charges against 11 Saudis for suspected involvement in the killing and that it was seeking the death penalty against five of them, usually carried out in Saudi Arabia by beheading.

“We affirm that this country will never deviate from the application of Allah’s law without any distinction or delay,” the king said.

He also made a vague reference to governmental reforms to ensure that instructions are properly followed to “avoid any violations or mistakes.”

Saudi Arabia has said that the operation that led to Khashoggi’s death was carried out outside the chain of command. Last month, Salman announced the formation of a committee charged with restructuring the intelligence apparatus to prevent similar problems from occurring in the future.

Heading that committee is the crown prince.

Those steps have done little to cast doubt on the narrative laid out by Turkish officials that Khashoggi was suffocated soon after entering the consulate and then dismembered by a team of 15 Saudi agents who had flown in to do the job. Nor have the kingdom’s frequently shifting explanations stemmed the outrage in Western countries over the death.

Germany on Monday froze the delivery of previously approved arms exports to Saudi Arabia over the killing of Khashoggi. It also barred 18 Saudis from entering Europe’s border-free Schengen zone because of their suspected involvement.

Heiko Maas, the German foreign minister, told reporters in Brussels that his country had issued the ban for the 26-nation zone in close coordination with France, which is part of the Schengen Area, and Britain, which is not.

“As before, there are more questions than answers in this case, with the crime itself and who is behind it,” Maas said.

Over the weekend, the United States announced sanctions on 17 Saudis suspected of involvement in the killing. The German list included the same names, plus that of Gen. Ahmed Asiri, the former deputy head of Saudi intelligence, who was fired after Khashoggi was killed.

Khashoggi, 59, went to the consulate in Istanbul on Oct. 2 to obtain papers that would allow him to marry his fiancée, who is Turkish.

Over the past few weeks, the Turks have leaked evidence of the plot, including the names and photographs of the Saudi team members and surveillance footage of them arriving at the airport and moving around in Istanbul.

The Turkish defense minister provided further information over the weekend, pressing the case that the team had set out to kill Khashoggi, rather than deciding to do so only after an effort to bring him home had failed, as Saudi officials have contended.

“The most important issue is this crime was premeditated, it did not happen in a second,” the minister, Hulusi Akar, said at the Halifax International Security Forum in Canada on Saturday. “It was premeditated. Those people were sent to Istanbul and they did their work.”

Akar also provided a new possible answer to one of the killing’s enduring mysteries — the location of Khashoggi’s remains — suggesting that the Saudi agents could have carried Khashoggi’s dismembered body out of the country in their luggage under the cover of diplomatic immunity. “Possibly, possibly they committed the murder and then after that, within three or four hours, they left Turkey,” said Akar, a retired general who left his post as chief of staff in the summer to take up the civilian post of defense minister.

“And because of the diplomatic immunity they left very easily, without having any problem with the luggage. Possibly in the luggage they carried the dismembered body of Khashoggi,” he added.

The killers had several hours between Khashoggi’s arrival at the consulate and the time when his fiancée and friends alerted Turkish authorities that he had not emerged, Akar noted. By then, Khashoggi’s body had probably already been removed from the consulate, he said.

“Possibly, Khashoggi was strangled as soon as he entered and after that dismembered. And they removed the body parts from the consulate,” he said. “Turkish teams did some work in the consulate but they could find nothing.”

Turkish officials have said that most of the 15 Saudis who arrived in Istanbul by commercial and private planes in the hours before the killing did not have diplomatic status. When they left, their luggage passed through airport security machines. Security officers also hand-searched some of the luggage on the second plane.

At least nine of the Saudis were government and security officials. One, Maher Abdulaziz Mutreb, was a frequent companion of Crown Prince Mohammed.

A diplomat who left shortly after the killing was an intelligence officer and the deputy head of the Saudi consulate, Ahmad Abdullah al-Muzaini. Al-Muzaini made a quick trip to Riyadh, the Saudi capital, after Khashoggi first visited the consulate on Sept. 28. He returned to Istanbul the day before the killing and was photographed passing through Ataturk Airport, which serves the city, with heavy luggage.

He left the country again at 9:35 p.m. on the evening of Khashoggi’s death, flying direct to Riyadh from Sabiha Gokcen Airport on Istanbul’s Asian side, according to security camera footage released to Turkish news media. The Saudi consul, Mohammad al-Otaibi, who was also at the consulate during the killing, left the country two weeks later.