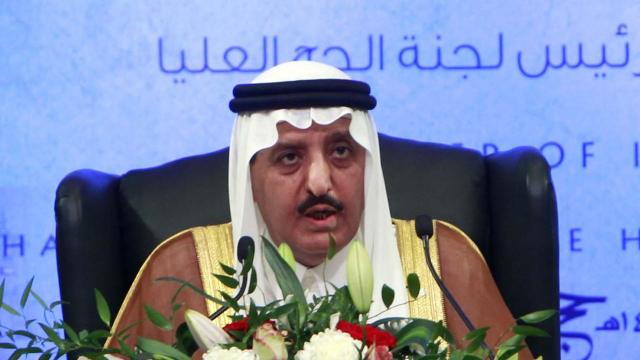 The New York Times, Reuters and the Financial Times reported that the prince's return had sparked speculation about his role in the kingdom's crisis management efforts following the international outcry over the killing of journalist Jamal Khashoggi.

The source speaking to CNN didn't clarify the reasons and significance of the prince's return or if he had indeed sought assurances for his safety after spending time abroad.

Khashoggi, a prominent Saudi journalist and critic of the regime, was last seen entering the kingdom's consulate in Istanbul on October 2.

The Saudis have presented shifting accounts around the death of the 59-year-old journalist, initially denying any knowledge before arguing that a group of rogue operators, many of whom belong to bin Salman's inner circle, were responsible. The Saudi attorney general has since acknowledged that Khashoggi was killed in a premeditated murder.

On Wednesday, The Washington Post, citing an unnamed senior Turkish official, reported a theory that Turkish authorities are pursuing that Khoshoggi's body was destroyed in acid on the grounds of the Saudi Consulate or the Saudi Consul General's residence.

A source close to the Saudi Royal Palace told CNN last week that the location of Khashoggi's body was not known to the Saudis. The source said the body was handed over to a local "collaborator" after the killing, adding that it is not at the Saudi consulate in Istanbul.

Saudi Arabia has detained 18 people and dismissed five high-ranking officials, including the crown prince's media chief and the deputy head of the Saudi intelligence service, as it continues its investigation into the killing of Khashoggi.

In September, suggestions of a royal family rift emerged after Prince Ahmed was caught on camera distancing himself from the royal family when talking to anti-Saudi protesters in London.

Responding to the heckling crowd who were reportedly angry over the kingdom's involvement in the ongoing Yemen conflict, the Prince appeared to say the entire family of Al-Saud was not to blame for the violence in Yemen, just his brother and the nephew.

In light of the apparent criticism, Prince Ahmed released a short statement through state-run Saudi Press Agency, in which he clarified that "the king and the crown prince are responsible for the state and its decisions."

"This is true for the security and stability of the country and the people. Therefore, it is not possible to interpret what I said in any other way," the statement continued.

King Salman ascended the throne in 2015, ushering in a new era of Saudi politics with the help of his son, Prince Mohammed, who he promoted to crown prince -- making him heir apparent -- in June 2017.

The crown prince has since tried to craft an image of himself as a young reformist pushing the Saudi kingdom into the 21st century with his economic and social reforms. But he has also been consolidating his power, stifling dissent and marginalizing senior royals and government ministers.

While it does not appear that the prince's homecoming will change the kingdom's plans for succession, Gregory Gause, a Saudi expert at Texas A&M University, says it does suggest the Saudi royal family may be trying to internally restructure the dynasty.

"What's going to happen when he goes back is opaque. ... I don't think that he has the kind of profile that would make him a serious challenger for the top spot but he is one of the most senior members of the family who has political experience," Gause told CNN. "He was always a number two from almost all of his time in government.

"But he has standing in the family and if there is an effort going on within the family to try to come up with a formula, not so much to replace the crown prince but to restrain him by putting some more senior people from the family into important decision-making positions, the return of Prince Ahmed would be consistent with that kind of maneuver," Gause said.

Gause added that the return indicates that the House of Al-Saud understands that Khashoggi's killing "has changed the political climate to an extent that they have do to something if relationships are going to be sustained at their current level."

He added: "We're also seeing that with the US and UK coming out with a more high-level call for some kind of negotiations on Yemen."

US Defense Secretary James Mattis and Secretary of State Mike Pompeo called earlier this week for a ceasefire in Yemen to be reached "in the next 30 days."

UN envoy to Yemen Martin Griffith agreed Thursday that Khashoggi's murder appears to have played a part in prompting the surprise American government call for a ceasefire.

There was already the beginning of a strong desire to move from war to peace, Griffith said in an interview with CNN's Becky Anderson, but issues including Khashoggi's murder "have catalyzed interests in these countries."