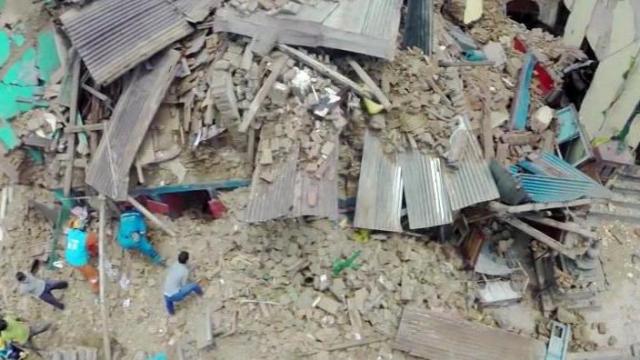 Cary, N.C. — When an earthquake devastated Nepal six months ago, the International Organization for Migration went to help the people left homeless. Many were living outside, with just a tent or a sheet of plastic to keep them out of the elements.

As a crisis manager for IOM, Brian Kelly's job was to figure out the best way to give the most people shelter. He turned to SAS in Cary for help.

SAS is internationally known and consistently ranks as one of the top places to work in the country. What many may not know is how the software company develops tools to take massive amounts of data and make sense of the numbers.

One such data analysis provided help for Nepal, fast.

“They’re saying, ‘Hey, I don’t know where to get sheet metal from,’ and then I have 300 million rows of data that tells me exactly who has been buying and selling sheet metal and thousands of other products,” Hsieh said.

Kelly was able to place an order for 310,000 sheets of 26-gauge corrugated iron sheeting, “which, as we speak, are starting to go on the roofs of people’s houses,” he said.

Hsieh had all the information at his fingertips from a project with the United Nations to sort and make 300 million rows of data easily accessible to the public. The massive amounts of data included which countries had the largest supply of sheet metal. Turns out, India did, right next door to Nepal.

“We provide software, we provide tools that allow people to make better decisions, to find the stories that are hidden in the data,” he said.

SAS has nearly 14,000 employees worldwide with more than 5,400 at the headquarters in Cary.