Determined ‘Warrior’ for the President Will Resign as Press Secretary 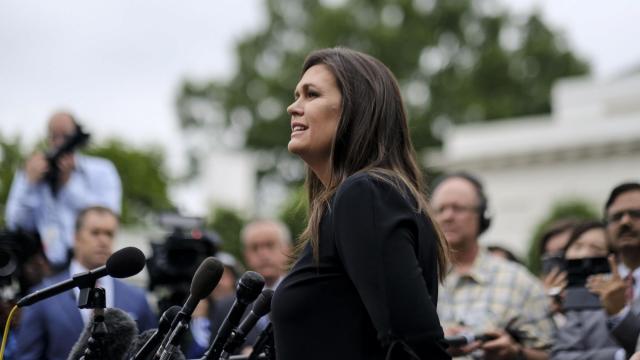 WASHINGTON — Sarah Huckabee Sanders, the White House press secretary who fiercely defended President Donald Trump through one of the most tumultuous periods in American politics while presiding over the end of the iconic daily news briefing, will step down at the end of the month.

Trump announced her departure Thursday on Twitter, the presidential tweet having supplanted the role that a White House press secretary played in previous administrations. He later praised her for her grit, her heart, and her loyalty to him and his goals.

“We’ve been through a lot together. She’s tough, and she’s good,” the president said as he brought Sanders onstage at an unrelated event in the East Room of the White House. “She’s a warrior,” he added, kissing her affectionately on the side of the head.

“After 3 1/2 years, our wonderful Sarah Huckabee Sanders will be leaving the White House at the end of the month and going home to the Great State of Arkansas,” he wrote on Twitter. “She is a very special person with extraordinary talents, who has done an incredible job! I hope she decides to run for Governor of Arkansas - she would be fantastic. Sarah, thank you for a job well done!”

Sanders appeared emotional as she joined him unscheduled at the event, which was officially devoted to criminal justice policy, and she praised Trump and his team. “I’ve loved every minute, even the hard minutes,” she said. “I love the president. I love the team that I’ve had the opportunity to work for.” Her resignation came on a typically head-spinning day in the Trump White House that would challenge any press secretary. The president was under fire for saying he would still accept derogatory information about a campaign opponent from Russia without necessarily calling the FBI. A government watchdog agency called on Trump to fire his counselor, Kellyanne Conway, for violating federal law on politics in the government workplace. And amid it all, Kim Kardashian West made an appearance with the president in the East Room.

While Sanders said she planned to spend more time with her three children, Trump urged her to run for governor of Arkansas, an ambition she has quietly nurtured for some time. Her father, Mike Huckabee, served as governor from 1996 to 2007. The current governor, Asa Hutchinson, a Republican, was just reelected last year but cannot run again in 2022 because of term limits.

No successor was announced, but the next press secretary will take over just as Trump is heading into the thick of a reelection campaign that will determine the fate of his presidency. The job of communications director has been vacant since the departure of Bill Shine, who left in March.

Sanders’ confrontations with reporters escalated even beyond the norm. At one point, she suspended the White House pass of a CNN reporter, Jim Acosta, who angered the president, only to have a judge order it reinstated. Special counsel Robert Mueller wrote in his report that Sanders had admitted it was untrue when she claimed the White House had heard from “countless” agents who complained about James Comey, the FBI director fired by Trump.

But Trump admired her, concluding that she had the right disposition for the job, one senior administration official said Thursday. The president liked that Sanders could be hard-hitting with reporters without in his view getting excessively personal.

“Sarah was successful because she knew her North Star was the president,” said Chris Ruddy, a longtime friend of Trump’s. “Her job was to defend and explain, and she did that almost flawlessly.”

Breaking with decades of tradition, Sanders effectively killed the daily briefing from the White House lectern that had been one of the most visible symbols of the American presidency. It has been 94 days since she held a formal briefing. Instead, she left the daily feeding of the media to Trump, who prefers to speak for himself and takes questions from reporters on a far more regular basis than most of his recent predecessors.

The move was widely criticized.

Katie Hill, a former assistant press secretary for President Barack Obama and now his post-presidential spokeswoman, said the daily briefing was not just for the benefit of the press. She said it served as an “organizing mechanism” for the administration, from the Treasury Department to the National Security Council, to understand and carry out the president’s priorities.

“It was one of the most powerful tools that the White House had to signal to the rest of the world what its message was and what its beliefs were,” Hill said.

Sanders, 36, rose from a campaign spokeswoman to one of Trump’s top lieutenants in three years, navigating an era of toxic media relations that shocked even the most seasoned Washington veterans. She ascended to the role of press secretary in mid-2017 at a time of staff turmoil and public spats between her predecessor, Sean Spicer, and Anthony Scaramucci, who briefly served as communications director.

She became one of the most recognizable faces of the administration, a popular figure on the right who was cheered at Trump’s rallies. But she was vilified by the left, once asked to leave a restaurant and skewered by a comic at last year’s White House Correspondents’ Association dinner who mocked her “smoky eye” makeup and compared her to “an Uncle Tom” for “white women.”

Sanders never gave an inch, pushing back against her critics and the president’s while declining to repudiate Trump’s description of the media as the “enemy of the people.” Viewing performances like these, Trump grew to trust Sanders, appreciating her public loyalty to him, even if legions of critics said it came at the cost of her credibility.

But in the past several months, as the press briefing atrophied and then disappeared, a Washington mystery emerged: What was the press secretary doing all day if she was not briefing the press? The four hours or so that previous secretaries dedicated to preparing for and holding formal briefings each day was time that Sanders had available to stay constantly near Trump, even as reporters complained that they were not getting questions on the day’s news answered in a formal fashion.

But for Sanders, the answer also seemed to be living her best life. During the president’s recent overseas trips, Sanders and other White House aides posted behind-the-scenes updates to Instagram.

In Tokyo, she took a sushi-making class. In London, she posted a Buckingham Palace selfie with actress and Cabinet wife Louise Linton. (In an undocumented interaction, she asked the Prince of Wales to sign her dinner menu. He did.) In Ireland, Sanders and her husband, Bryan, took a photo with a group of Trump loyalists at the president’s private golf club and visited a local pub.

“The best days for a press secretary are the days you don’t brief,” Ari Fleischer, who had the job during President George W. Bush’s administration, said in an interview before Sanders’ resignation was announced. “Sarah’s having a lot more best days than I ever had.”

Others who have had the job say a return to the more traditional briefing under Trump seems unlikely. It could well be up to the first press secretary under the next president to decide how — or whether — to approach the media in a formalized way, said Josh Earnest, who served as press secretary for Obama.

“That person is going to have to make some fundamental decisions about how and whether to rebuild some of the norms that I and my predecessors in both parties worked really hard to protect,” Earnest said. “How important is it to tell the truth? How important is it to get the facts right? Is it necessary to be in the loop at the White House and accurately reflect the president’s thinking?”

At the White House this week, Sanders seemed to return to her old routine: arranging for reporters to interview Trump, sitting in on Oval Office meetings, answering questions from reporters piecemeal in the White House driveway and not holding formal briefings. On Thursday, as Trump hosted reporters for nearly an hour for a working lunch with American governors, the heavy wooden door to Sanders’ West Wing office stayed closed. A bundle of newspapers addressed to her sat unread and still tied together with plastic.

Sanders informed her team of her departure around 3 p.m. At that time, several staff members had gathered in her office, and loud laughter could be heard behind the door.

Mick Mulvaney, the acting chief of staff, emerged just long enough to say that he thought it was wrong for reporters to stand in the hallway outside the press secretary’s office and possibly overhear conversations. (Mulvaney was reminded that the door was thick and that his comments were on the record.)

But Thursday evening, she invited reporters into the office and said she did not regret not holding more briefings. She said she thought it had been more important to facilitate opportunities for the president to speak.

“No one elected me to anything,” Sanders said. “They elected the president.”