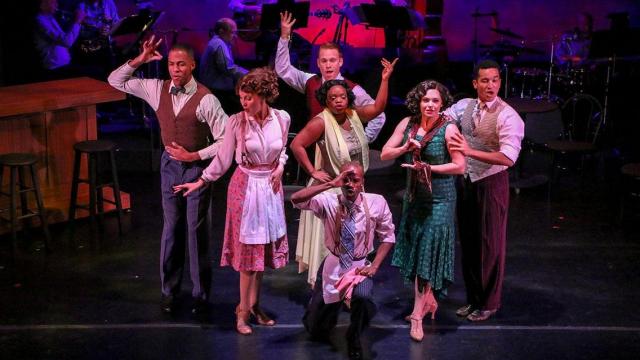 Almost 100 years ago, the theater was a hotspot for New York-based theater troupes passing through on their way to Florida, thanks in large part to its convenient location minutes away from the railroad station. As the railroad boom subsided and time passed, the theater transformed to accommodate the needs of the area, converting to a movie theater, a furniture store and a men's clothing outlet before eventually shuttering its windows in 1965.

But it didn't take long for the Temple Theatre to bounce back.

In 1981, the son of the theater's original owner led the Sanford community in restoration efforts, starting with getting the site registered as a National Historic Site and securing a grant from the North Carolina Legislature. After a few years of construction, in 1984, the Temple opened its doors once again. While the updates made during those three years brought the theater into a new age, much of the original architecture was kept intact.

"One of the draws of the Temple is that we still have the original tin ceiling," said Peggy Taphorn, current producing artistic director of the Temple Theater. "Back then, they didn't have microphones — you had to be able to project, and the tin ceiling would act as a sounding board. Even to this day, for plays where we don't have amplified music, we don't use microphones, because we simply don't have to."

Taphorn has been an integral part of the theater since 2007, and her prestigious experience in the arts has proven invaluable to its growth. Before Sanford, Taphorn lived in New York City for 22 years, performing in Broadway plays and touring around the country. In addition to acting in productions like "Me and My Girl, Broadway!" and "Showboat," Taphorn also served as the dance captain for the first national tour of "Little Women: The Musical."

While New York City was her long-time home, Taphorn's roots hail from a small town in Illinois, so coming to Sanford was like a breath of fresh air.

"I was able to do six Broadway shows, a couple of Asian tours, and a fair amount of national tours. Eventually I got to a point in my career where I had done most of what was on my list to do," Taphorn explained. "Living in New York for so many years, it's exciting, of course, but you don't feel really connected. Everybody that I'm connected to here seems to care about the growth and the movement, and it's fun to be part of something like that."

It wasn't just the small-town atmosphere that drew Taphorn in, however, the Temple itself was a major selling point.

"It was the theater that I fell in love with. It's a real historic gem. Having traveled a lot with theater, you just don't see these spaces anymore, because most of them have been knocked down or repurposed," Taphorn explained. "It was just so refreshing and exciting to see one in such good condition in the middle of this beautiful small town."

Under Taphorn's direction, the historic gem that is the Temple Theatre has undergone a renaissance of sorts, branding itself as Carolina's Center for the Performing Arts, a moniker that Taphorn adopted based on the town's central location.

In addition to regularly producing shows and hosting guest artists, the theater also organizes a variety of classes and workshops; and through her Broadway connections, Taphorn has been able to bring several big names into town to help lead these programs. Most recently, Susan Schulman and Michael Lichtefel — both Tony nominees — came to Sanford to conduct a pre-Broadway workshop of their new show, Hoagy Carmichael's "Stardust Road."

"For me, that was one of my proudest moments. I'd worked with Susan and Michael as a plebe, and here I was going, 'This is my empire. Welcome,'" Taphorn laughed. "Producing a Broadway show these days has so much money at risk, and we gave them a great cast and a safe space to do so. They could not have been more thrilled with the theater and the Temple staff; and I was really proud, because we treated them like it was a Broadway show on our shoestring budget with our small-but-mighty staff."

While the Temple now boasts a strong reputation for the arts, it wasn't always so renowned. In fact, when Taphorn started in 2007, she immediately recognized several areas sorely in need of growth. For instance, the theater was lacking in youth programs, with around one camp every summer that brought in 20 kids. As of 2018, the theater has been able to serve 10,000 kids.

For Taphorn, the ability to see the Temple's impact on the community in ways like this has been a welcome change from her days on Broadway.

"I've been here 12 years now," Taphorn said. "The kids that were teenagers when I got here have now graduated college and are out doing theater around the country. Even the ones that aren't in theater will say, 'I'm a nurse, but it really helped me to be able to speak to people.' I actually see the effect as opposed to the big Broadway blockbuster — which, believe me, is fun — but you just take your paycheck and go home."

While the Temple Theatre has already gone through major changes in the past few decades, Taphorn and her team still have a number of projects and goals in the works, especially with the centennial anniversary of the theater on the horizon. In addition to fundraising efforts, Taphorn hopes to add more dedicated classroom and rehearsal space, as well as expand the reach of the theater's programs.

People from 63 counties in North Carolina have attended the shows, but, long-term, Taphorn hopes she can elevate the Temple to even more of an economic magnet, bringing increased foot traffic to downtown Sanford and increased sales to the box office.

"We'd love to keep moving forward, to keep expanding, to keep growing. Like most arts organizations, when the economy crashed [in 2008], we took a pretty big hit, but now we're in fabulous financial condition," Taphorn said. "I think we're headed into some really exciting times, and we have some collaborations coming up in Chatham County that I think are going to be great for the Temple. We just keep getting bigger and better."