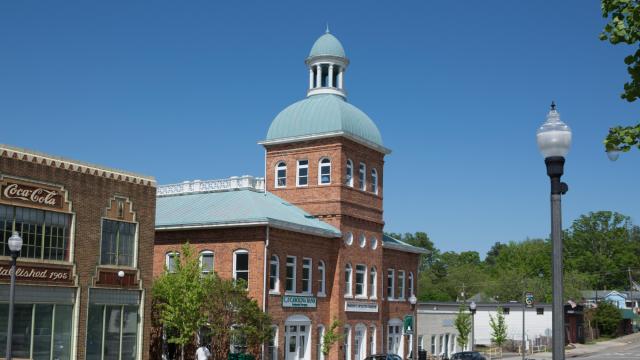 North Carolina has experienced a surge of growth in recent years as places like Raleigh, Charlotte and Wilmington top lists of best places to live or fastest growing cities. And as more people flock to North Carolina, many are discovering the high quality of life isn't limited to just the major metropolitan areas.

Smaller towns have just as much to offer, with less traffic to boot. Sanford is one of the state's smaller communities that is making a name for itself — it recently secured a half a billion dollar investment from Pfizer — but the draw of the city isn't just its robust job market.

"The fact that we're between Raleigh and Pinehurst certainly never hurts," said Michael Smith, CEO of the Sanford Area Growth Alliance. "Sanford is now closer to the Triangle than it's ever been. We're fortunate to still have an incredible freeway connection. I know if there's a big project visiting from the Triangle and they've got a team coming from Raleigh, I know we need to be prepared 20 minutes early."

Sanford's central location makes it an easy drive to Raleigh, Greensboro and Fayetteville. The amenities of these cities are just a relatively short drive away, with people choosing to live in Sanford and commute during the day and vice-versa. The direct link to U.S. Route 1 means residents are never as far away as the map might make it appear.

Connecting to larger cities means that residents don't have to choose between metropolitan growth and a small-town sense of community.

"In my opinion, what makes Sanford and Lee County a great place to live? It's the sense of community," said Meg Moss, executive director of the SAGA Chamber of Commerce. "Knowing people when you go out to dinner, the affordability versus living in a larger metropolitan area, it's going to church, and having a community of people you live, work and play with. We have a lot of the amenities we need, and there are things to do here."

Some of those things include visiting the revitalized downtown. As part of a concerted effort to bring life back to Sanford's Main Street, the local government worked to re-invest in the community.

Now the downtown plays host to a variety of events like the Sanford StreetFest. The event, now in its third year, attracts vendors, food trucks and entertainment all capped off with a fireworks display.

When there's not a festival, residents can have a drink at one of the two breweries, or visit any of the locally owned businesses.

"I can bring my kids downtown on a Saturday and spend several hours," Moss said. "There's a used bookstore with a kids section. We'll head over to one of the coffee shops and grab a [caramel drink] from a locally owned coffee shop. There's a comic book shop that's a hidden gem."

The downtown also plays host to the historic Temple Theatre. Built in the 1920s, this historic building has been renovated and now plays host to traveling Broadway shows throughout the year. The theater's performances draw audiences from the surrounding counties, meaning show nights are an event in and of themselves.

When the weather is nice, families can enjoy one of the many local parks or visit the splash pad at Kiwanis Family Park. For the more adventurous, there are trails for hiking and biking and rivers for kayaking.

"We see people outside walking and biking and running the greenway trails," Moss pointed out. "We have our kayaking down the Deep River too. Up in the Deep River area there's a 13-station sporting clay shooting station. There's a large show called the Southern Side by Side that attracts thousands of people from across the country and world."

With its amenities, central location and hometown feel, Sanford remains comfortable, convenient and authentic. Additionally, it continues to grow and reinvest in its community. As the town continues to attract businesses big and small, residents aren't concerned that it will lose the small town vibe that so many people love.

"It's an amazing place," Smith said. "I keep running into new and exciting positive things I didn't know existed here."