Raleigh, N.C. — For the third time in four years, Sanderson High School's theater ensemble is headed to a regional competition.

The success of the school's last big production, "Ernest and the Pale Moon," is sending the group to the largest high school theater competition in the country. Together, the students will leave for Louisville, Kentucky in February to represent North Carolina in the Southeastern Theatre Conference, or SETC.

The group of 30 students worked hard to succeed.

"We can joke and have fun beforehand, but once warm-up starts, we get really focused," said Rachel Mathers, a senior in the theater department. 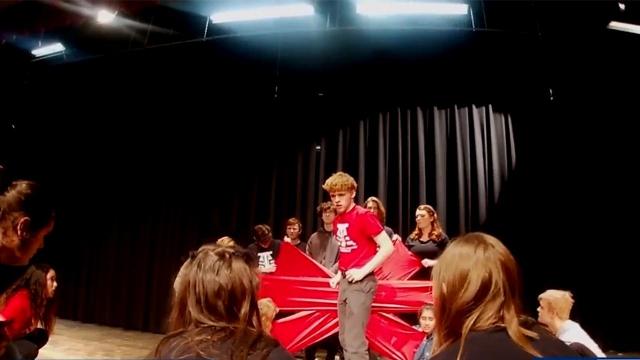 "They're all just encouraging and positive people -- and just being around them makes this experience just that much more fun," said Allison Moreau, another senior. "Being chosen once is a dream come true. Being chosen twice in a row is just mind blowing."

Drama teacher Peter Comperatore said winning the honor two years in a row is especially satisfying for his students since Sanderson is not considered a magnet school for the arts.

"Being able to do it back-to-back is something really rare," he said. "Students come into the school and want to be part of something successful."

Sanderson High School will hold an encore performance of "Ernest and the Pale Moon" Jan. 30 at 7 p.m. Money raised from ticket sales will help pay for their trip to Louisville.

"Just having the time of our lives together and really making those memories -- it's really just what makes this hard work worth it," Moreau said.