Sanders 'can't guarantee' Trump hasn't used the n-word, but hasn't heard him do it 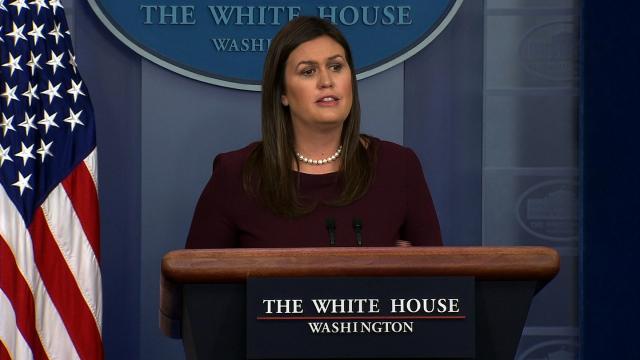 (CNN) — As President Donald Trump faced allegations of racism and cruelty on Tuesday, his press secretary stepped to the White House podium to deny only one of those charges.

Briefing reporters for the first time in weeks, Sarah Sanders insisted Trump was not using racially coded language when he disparaged a disgruntled former aide, who is African-American, as a "dog."

But her defense -- that Trump has insulted people of all races, not just African-Americans -- only underscored how the President and his aides have embraced his caustic attitude.

"The President's an equal opportunity person that calls things like he sees it," Sanders said. "He fights fire with fire."

The explanation came amid a string of defenses against charges made in Omarosa Manigault Newman's new memoir, "Unhinged," which portrays the President as racist and lewd.

One of the most explosive claims in Manigault Newman's book, which was released on Tuesday, involved a possible tape of Trump using a racial epithet. Existence of the tape has not been verified.

Asked Tuesday whether the President had ever used the N-word, Sanders would not definitively say, instead referring reporters to a tweet.

"The President addressed that question directly," she said, adding: "I've never heard him use that term or anything similar."

Trump tweeted Monday: "I don't have that word in my vocabulary, and never have. She made it up."

Pressed specifically on whether any recording of the President using the racial epithet exists, Sanders said: "I can't guarantee anything, but I can tell you that the President addressed this question directly."

Trump and his allies have launched an all-out assault on Manigault Newman's character, led by the President himself on Twitter.

"When you give a crazed, crying lowlife a break, and give her a job at the White House, I guess it just didn't work out," he wrote on Tuesday morning, one of nine tweets or retweets from his account on the subject.

"Good work by General Kelly for quickly firing that dog!" he said.

Sanders claimed Tuesday that Trump's description of his former aide as a "dog" had "nothing to do with race and everything to do with the President calling out someone's lack of integrity."

The "dog" comment was one of many insults the President has used to describe prominent African-Americans. He has denigrated Democratic Rep. Maxine Waters, NBA star LeBron James and CNN anchor Don Lemon just in the last two weeks.