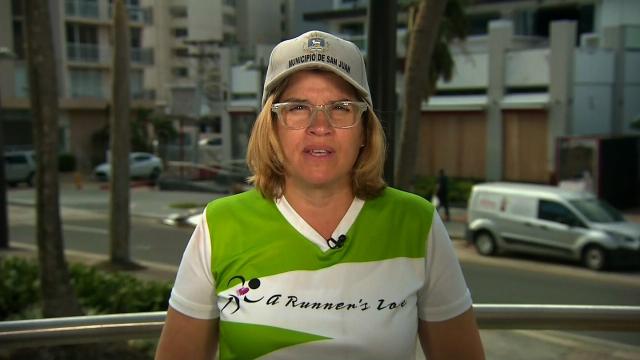 "The contract should be voided right away and a proper process which is clear, transparent, legal, moral and ethical should take place," Yulin Cruz said in an interview with Yahoo News Tuesday.

Whitefish Energy, a two-year old electrical utility firm with ties to the Trump administration, announced last week it had secured a $300 million contract from the Puerto Rico Electric Power Authority -- more commonly known as PREPA -- to repair and reconstruct parts of the island's electrical infrastructure.

This is the largest contract awarded to any company for relief efforts in the aftermath of Hurricane Maria.

Whitefish only had two employees the day the hurricane hit. Already, the company has scaled up to 300 employees in Puerto Rico -- and it says 700 more are on the way. Such quick growth is typical among utility firms when they are awarded large contracts, the firm told CNN.

"It seems like what the Puerto Rican people are going to be paying for, or the American people are going to be paying for, is an intermediary that doesn't know what is at stake here and that really has to subcontract everything," Yulin Cruz said of Whitefish in the interview. "What we need is somebody that can get the job done and that has the expertise to get the job done."

"We are making progress and doing work when others are not even here," Whitefish's statement said. "We find her comments to be very disappointing and demoralizing to the hundreds of people on our team that have left their homes and families and have come here to help the people of Puerto Rico."

By Wednesday afternoon, the situation got heated on social media.

After Whitefish posted its statement on Twitter, Yulin Cruz tweeted: "If @WhitefishEnergy feels that asking for transparency is "misplaced", what are they afraid we will find."

"We've got 44 linemen rebuilding power lines in your city & 40 more men just arrived. Do you want us to send them back or keep working?," the utility company replied to the mayor on Twitter.

"Threats received by @WhitefishEnergy. The implication is if I do not "play nice" they will not do their job. Nasty!," the mayor tweeted back. She said Whitefish's response implied it would not treat San Juan with the "diligence it deserves."

Whitefish then tweeted that it did not want to leave the island without helping and it was committed to restoring power in Puerto Rico.

Yulin Cruz has long been a critic of Puerto Rico Governor Ricardo Rossello, who backed the Whitefish contract. She has also criticized President Trump's handling of relief efforts on the island, repeatedly noting that U.S. citizens in Puerto Rico are facing a "life and death situation" since the hurricane made landfall.

She does not have authority over PREPA and the contracts it issues.

PREPA's executive director, Ricardo Ramos, told reporters last week during a press conference the cash-strapped island chose Whitefish because it didn't require a big deposit upfront. The other unnamed contender wanted a $25 million down payment for the work, Ramos said.

"In that moment, we were not in a position to offer that collateral," said Ramos. "The other company did not ask for a guarantee of payment."

But some on Capitol Hill are concerned that Whitefish may have stood out for another reason.

The tiny utility company is based in Whitefish, Montana, which also happens to be the hometown of Interior Secretary Ryan Zinke.

Both Zinke and Whitefish CEO Andy Techmanski acknowledge knowing one another. Zinke's office described Whitefish as a "small town" with a population of roughly 6,000 people. One of the secretary's sons "joined a friend who worked a summer job at one their [Whitefish's] construction sites."

Whitefish spokesman Ken Luce confirmed an Oct. 1 report by NBC Montana, which quoted Techmanski as saying he reached out to Zinke after winning the contract to help get resources to the island more quickly,

But Luce told CNN that the company did not make any requests to the administration except for one after the contract was signed on Sept. 26.

"The secretary had absolutely nothing to do with Whitefish getting the contract," he said.

Techmanski, who has described the firm as specializing in "difficult and mountainous terrain projects," has downplayed any ties to the administration.

"All I can say is, we took the call and we're here," Techmanski told CNN Friday, referring to a call from director Ramos. "We called each other."

Still, PREPA, a state-owned utility, chose to hire Whitefish rather than initiate agreements with other utilities to help recover from the natural disaster more quickly.

The bankrupt utility, which is $9 billion in debt, could have requested aid after Maria through the American Public Power Association, a network that provides help to other utilities during widespread power outages. That's what Texas and Florida did after Hurricanes Harvey and Irma.