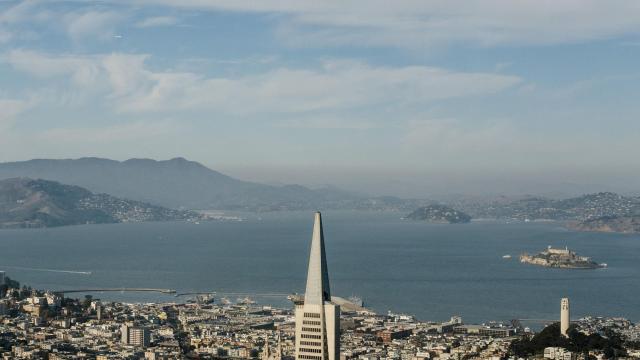 SAN FRANCISCO — The skyscraper came late to this city, a shipping and manufacturing hub for much of its existence. The wealthy roosted on the hills, and the masses toiled on the flats and the docks. Everyone lived close to the ground in a setting renowned for its natural beauty.

Now the things being shipped are virtual, and vast amounts of office space are needed to design, build and market them. Salesforce, a company that did not exist 20 years ago, will take up residence Jan. 8 in the new Salesforce Tower, which at 1,070 feet is the tallest office building west of the Mississippi.

In Silicon Valley, the office parks blend into the landscape. They might have made their workers exceedingly rich, they might have changed the world — whether for better or worse is currently up for debate — but there is nothing about them that says: We are a big deal.

Skyscrapers tell a different story. They are the pyramids of our civilization, permanent monuments of our existence. They show who is in charge and what they think about themselves. Salesforce Tower is breaking a San Francisco height record that stood for nearly half a century.

“A ceiling has been breached,” said Alison Isenberg, a professor of urban history at Princeton University. “Now the discussion becomes is this just a building that is taller than the ones we already had, or does it raise new questions about the nature of the city?”

Salesforce Tower is visible from just about everywhere. Go to the farthest edges of the city, and its 61 stories of tapered steel and glass stick up like a forceful thumb. On the drive north from the airport, the tower is the one building discernible over Potrero Hill. From the distant North Bay, it is the first thing you notice as San Francisco sheds its customary morning fog. The building catches the morning sun, dazzling the way none of its lesser neighbors do.

The tower is not beautiful, but is impossible to ignore. The top floors are set off from the rest, and the crown is flat rather than a spire. It looks as if a rocket were stowed up there, an escape vehicle for the tech overlords when the city is consumed by disaster.

It will have to be a big rocket, because there are so many overlords. While few were looking, tech ate San Francisco, a development encouraged by Mayor Ed Lee, who unexpectedly died this month. There are now 79,129 high-tech jobs in the city, about triple the number a decade ago, according to a new research report from the real estate firm CBRE. If you work in an office in the city, there is a 28 percent chance you work in tech. That level is exceeded only by Seattle, where the sharp growth of Amazon pushed the percentage of tech workers up to 38 percent, and by Silicon Valley itself, where it is 42 percent.

“San Francisco has gone from being driven by multitudes of industries in 2007 to being now focused largely on tech,” said Colin Yasukochi, a CBRE analyst. “The growth feeds on itself. Tech workers are attracted to the great opportunities in the city, and the supply of workers means more tech companies come here.”

The website for Salesforce Tower makes a point of noting the other tech companies nearby — Yelp, Amazon, eBay, Intuit. Meanwhile, nontech companies are slimming down and looking elsewhere. Charles Schwab, the financial services firm founded in San Francisco in 1971, just built a 5,000-employee campus in Texas.

Within Salesforce Tower’s shadow, a more slender, 802-foot building is also just coming to completion. It will house thousands of Facebook employees; there are condos for sale as well. The penthouse is available for a reported $42 million, offering a well-heeled mogul the chance to make a splashy statement.

San Francisco has always been like this. There were so few skyscrapers in the city’s first century that the ones that were built tell a tale of rampant egos and unrestrained power. At the end of the 19th century, the city’s newspapers had hubris and wealth to rival today’s internet companies. In 1890, the owner of the San Francisco Chronicle, M.H. de Young, erected a 10-story building worthy of his publication. It was the tallest building on the West Coast.

That irked the new owners of The Call newspaper, the Spreckels family, who in 1895 commissioned a tower of their own mere feet from the Chronicle building. It would be more than half again as tall — 18 stories — and would be, they promised, “the finest building ever erected for a newspaper office.” It had a 60-foot terra cotta Baroque dome, four corner cupolas and spectacular flourishes. It did the job, and then some, Ellen Klages wrote in a historical overview in 1993. One commentator at the time exclaimed, “From the summit of every hill as one views the city, it rivets the attention of the spectator, reminding him forcibly of the story of the giant holding an army of pygmies at bay.”

That was just the beginning. Today’s inhabitants of Silicon Valley are no slouches at self-promotion, but even they could learn something from The Call, which published a report calling its new headquarters “the crowning achievement of mankind in the Western world.”

Salesforce, co-founded and run by Marc Benioff, is wisely saying no such thing. It makes software that lets companies handle their relationships with customers better and so passes unnoticed by the general public. Next year, it will most likely surpass Wells Fargo as the largest private employer in the city.

San Francisco has always had conflicting feelings about growth and wealth. It was a gold rush boomtown but in the 1960s was home to the Diggers, a hippie offshoot that dreamed of a society without money. That notion lingered in a thousand communes.

“The mid-1960s and early 1970s in San Francisco simultaneously saw a downtown building boom and by far the nation’s strongest anti-skyscraper movement,” said Isenberg, author of “Designing San Francisco: Art, Land and Urban Renewal in the City by the Bay.” “They went hand in hand.”

At the center of the conflict was the Transamerica Pyramid, whose plans were unveiled in 1969. An insurance company, Transamerica had deep roots in the city, but many residents thought its location on the edge of the Financial District, near Chinatown and North Beach, would overwhelm the neighborhood.

The leader of the opposition was Alvin Duskin, a dress manufacturer — he is said to be the first to use the peace sign in fashion — and local agitator. “Stop them from burying our city under a skyline of tombstones,” one ad urged, while another proclaimed: “New studies have shown that the more we build high-rise, the more expensive it becomes to live here.”

The protests had an effect. The Transamerica Pyramid was shaved down from 1,040 feet to 853 feet. A proposition in 1971 to limit buildings to six stories did not pass, but it was one of those defeats that is also a bit of a victory. The Transamerica Pyramid remained the tallest in the city until this year. “A set of compromises was struck over heights and growth and redevelopment that held,” Isenberg said. “Now they will need to be renegotiated.”

The Transamerica Pyramid became a beloved local landmark and universally recognized symbol of the city. Salesforce, if it is smart and lucky, might see its headquarters become the same. The company’s offices are concentrated on the lower floors, but it is also leasing the 60th and 61st, the latter of which is a 17,000-square-foot event space that nonprofits can use for free. That’s one way to build good will. Already 55 groups have inquired.

If Salesforce executives ever get too full of themselves, they can seek out the Call building.

In 1938, the dome was removed, and the remains were stripped of all architectural splendor. The building — whose high-tech tenants include a venture capitalist and a DNA sequencing startup — is getting a face-lift, but its past glory is gone for good.

As for The Call itself, the paper disappeared many decades ago, leaving no trace.