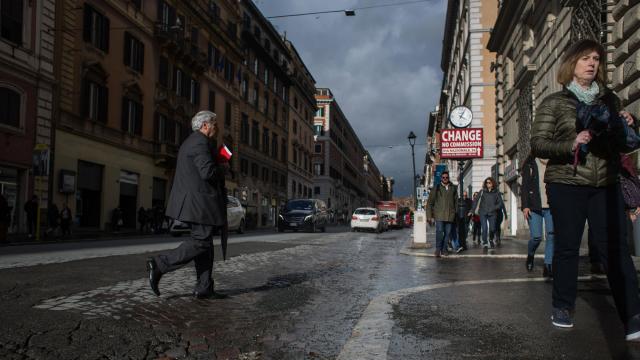 ROME — “Jackal!” the activists shouted as Matteo Salvini, the strongman of Italy’s populist government, arrived at the other end of the street. “Jackal!”

Salvini, the leader of the anti-migrant League party and the country’s tough interior minister, had arrived to leave a rose at the entrance of a drug den where police had discovered the body of a 16-year-old girl, Desirée Mariottini, who they believe had been repeatedly raped, perhaps while unconscious, and left for dead by African migrants.

But the activists in San Lorenzo, a traditionally left-wing neighborhood still scarred from the bombings of the Second World War and now bearing the fresh wounds of drug dealers and lawlessness, refused to let Salvini pass.

They carried banners reading: “Salvini exploits tragedies. San Lorenzo is not your campaign’s catwalk,” and shouted for him to leave.

“He’s using this for his constant electoral campaign,” said Isabella Troisi, 22, one of the activists. “Lots of people are afraid of migrants now and he is trying to make them more scared.”

The standoff this past week laid bare Italy’s widening polarization. But if Salvini’s opponents on the left are now attuned to his media tactics and use of the migration issue to whip up his supporters, they have yet to blunt his deepening political inroads, outside this Roman neighborhood at least.

Salvini’s march has only continued. The leader of the formerly separatist party (it used to be called the Northern League) has used a new nationalist “Italians First” message to eclipse his governing partners in the Five Star Movement and become the driving force of Italy’s government.

He has cracked down on migrants, raised the alarm about a drug and security emergency, led a rebellion against the European Union, insulted its leaders as drunks, sated the news media with a constant stream of outrageous sound bites, baited the left into overreactions by purposefully echoing Mussolini and filled the widespread Italian demand for a law-and-order heavy.

On Friday afternoon on Facebook, he applauded the capture of, as he put it, a “fourth maggot” who “(what a coincidence), is an illegal immigrant.”

His support has grown so strong around Italy that he appears to have started thinking the unthinkable: conquering Rome with a League candidate for mayor, and thus governing a capital his party once explicitly ran against and disparaged as the “Great Thief.”

Virginia Raggi, the mayor of Rome with the Five Star Movement, is deeply embattled as the city has fallen into disastrous degradation, with garbage strewn across dark, broken streets and drug use spiking in bleak neighborhoods. She is also facing a sentence in November on charges that she had lied to local authorities, which she denies.

If she were to resign, which is unlikely, elections could be held next May, and Salvini’s League is in a better position than ever to capture the capital. “A League Mayor in the Capitol,” read an exuberant headline of the conservative newspaper Il Tempo.

In the death of Mariottini, Salvini, one of the most politically attuned leaders in Europe, heard a clarion call that he has heard before and that has helped propel his political rise.

A month before the Italian elections in March that brought him to power, the dismemberment of another troubled Roman teenage girl, Pamela Mastropietro, allegedly by a Nigerian drug dealer, inflamed a nation already fed up with illegal migration. Salvini helped it along, calling her alleged assailants maggots and proof that migration had gotten out of control.

Mastropietro’s death soon led to a shooting spree against migrants by a right-wing extremist in the small town of Macerata, where she had died, and it prompted a more lasting national uproar that has fed the dramatic rise of the League party and Salvini.

The death of Mariottini provided a similar opening for Salvini, who uses social media as a constant and attention-demanding megaphone: He wrote on Twitter Wednesday morning that he had attended an emergency public order meeting with Raggi. Then, he wrote, he would go to San Lorenzo: “A 16-year-old girl can’t die, raped like this, in a receptacle of crime and drug dealers. I’m going to see it in person. #ZeroTolerance.”

But before he arrived, cameramen, TV anchors and activists crowded in front of Via dei Lucani 22, the entrance to the drug den where the girl had been found and where the words “Justice for Desirée” was now written amid red hearts.

“We don’t want xenophobes in San Lorenzo,” said Carlo Caponi, a member of the anti-fascist National Association of Italian Partisans, who waved his organization’s flag. “We defend the constitution and everyone’s civil rights.” The protesters exchanged sharp words with a few of Salvini’s supporters, who made sure their voices were heard.

“Pamela was killed by four Nigerians, and Desirée was killed by Moroccans!” screamed Ilenia Curti, 39, of San Lorenzo. (Police have so far held two Senegalese men, a Nigerian and a Ghanaian in connection with Mariottini’s death.) When the activists challenged her, she screamed, “Italians First!”

Curti, whose Facebook page is peppered with posts expressing rage at the killing of Mastropietro in Macerata and admiration for Mussolini, screamed that the students and activists were “filthy” and “pimps.”

Suddenly, a stir ran through the crowd.

“He’s coming,” one reporter shouted, and the scrum rushed away from Curti and the protesters to the other end of the street.

He said that by February, there would be 154 more police and 100 more paramilitary police officers in Rome “thanks to a courageous economic budget that Brussels would like us to change, but we will not change a comma.”

He said he would have gladly left the rose that he had brought with him in the car if it weren’t for “those imbeciles.” He said, “We’re going to hurt the drug dealers.” He said he would act to get rid of an “idiotic law of the left-wing government” that had decriminalized drug use.

He would bulldoze the drug den and nearly 100 more abandoned buildings like it around the city. (He said that clearing a famous squat of post-fascists, called CasaPound, was not a top priority.)

“I am here to pledge myself to the normal people from the neighborhood who don’t want drug dealing, chaos, prostitution, rackets. To clean it up,” he said, adding that he couldn’t explain why no one had done anything before, but he would act with a “heavy hand.” At a certain point, Salvini broke free from the scrum and ran up the street, but the protesters, screaming that he should leave the neighborhood, held firm. Salvini stopped, and the protective orbit of camera satellites surrounded him again.

Salvini’s movable news conference seemed stuck. After more than 20 minutes, he retreated to his car and drove off.

“We had had a good result in not allowing him onto the street,” Troisi, the activist, said triumphantly. But she acknowledged that Salvini seemed always more popular in the city and the country, and that he always seemed to come out on top.

A couple hours after the rally broke up, Salvini returned unannounced and left a rose in front of the gate.

La Stampa, one of the nation’s leading newspapers, published a picture of it on its front page. The headline: “The League Prepares to Conquer Rome.”