Fayetteville, N.C. — Although Hurricane Matthew isn't forecast to make landfall in North Carolina, it will bring rain to many parts of the state that have been inundated with wet weather in recent weeks.

Fayetteville is one such area, where up to 10 inches of rain last week washed out roads and damaged some homes.

Fayetteville officials were also spending time on Thursday to provide shelter for homeless people in different parts of the city.

Richard Monroe said he has lived in Fayetteville all his life. He even remembers Hurricane Hazel, which roared through North Carolina and South Carolina as a Category 4 storm in 1954.

"I was 8 years old when Hazel came, and the water got higher than I've seen it any time in the last 50 years," he said.

Monroe has lived in a homeless encampment under the Person Street Bridge for about six months. He was there last week when torrential rains drenched the area, causing the Cape Fear River to rise.

"As long as the river doesn't rise too high too fast, we can handle it," he said.

Not far from the homeless encampment, the Salvation Army provided a "love lunch" on Thursday for the less fortunate.

Christian Delatorre is one of the people who has a bed to sleep in at the Salvation Army shelter. He was outside during last week's rainfall, but he said he plans to ride out Matthew inside.

"That's the best thing I can do, because I don't want to put myself in a situation to where I'm getting dragged by a current or anything like that," he said.

The Salvation Army is working with Operation Inasmuch to provide shelter, food and essential goods to homeless people in the area so they can make it through whatever Hurricane Matthew brings to the region.

The Salvation Army says it plans a "white flag" approach to encourage homeless people to come inside.

"They have their shelter open. Once their shelter is full, then they'll move folks as an overflow over to their gymnasium," Ray Helton, with Operation Inasmuch, said. "When they hit 30 people there, they'll give us a call. We're set up and ready to operate and be their backup."

The Salvation Army shelter is home to about 75 people, and officials say they'll be able to handle another 25 to 30 people in an overflow gym.

Other churches and nonprofits in the area are also planning to help homeless people make it through the storm. 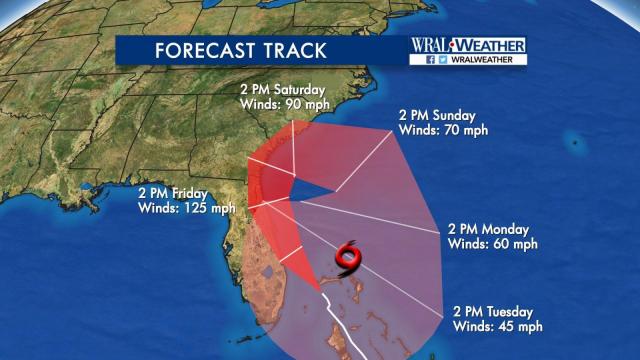