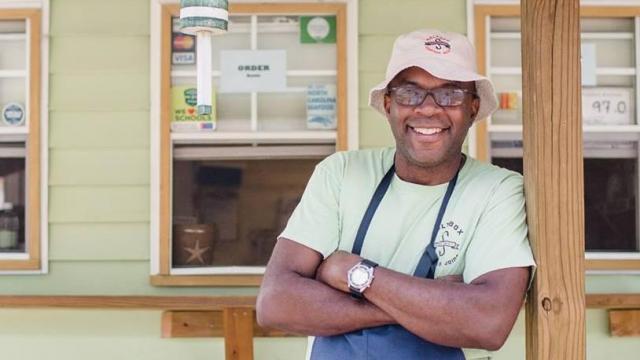 Durham, N.C. — Saltbox Seafood owner Ricky Moore went from wanting to become a graphic artist to cooking in the military.

Moore's culinary journey took him across the globe and it helped keep him focused when the coronavirus pandemic closed dining rooms in the state.

"I have a stove. I have a kitchen I have pots of pains. My local officials tell me I can still cook, ao that's what I'm going to do," Moore said. "That was sort of my daily mantra. I got to get up and put some in the pot today."

Moore's flagship location of Saltbox Seafood at 608 N. Mangum St. was in a great position to offer service through the pandemic. The walk-up window format also allowed enough space between the employees and guests.

"My core team, I kept them in place. I didn't take a paycheck, so I made sure that they stayed working," Moore said.

A James Beard semi-finalist for best chef in the Southeast, Moore almost didn't become a chef. He started out wanting to become an artist.

"I was going to go to school for art. That's all I did in high school," Moore said. "I got a scholarship to go to East Carolina University, but ultimately decided I didn't want to go to school."

Chefs talk: What made Durham the 'foodiest city' in the south?

Instead, Moore joined the U.S. Army and became a cook, where he said a good meal could boost morale.

"As a military cook, you took pride in the idea," he said.

After a decade with the Army, Moore eventually went to the Culinary Institute of America. Internationally, Moore has cooked in Paris, Singapore and Toronto. Stateside he cooked for years in Chicago and Washington D.C.

"I just want to make sure that I always stayed diversified," Moore said.

Roads eventually led him to Durham, where he opened Saltbox Seafood's first location in 2012. A second location at 2637 Durham-Chapel Hill Blvd. followed in 2017.