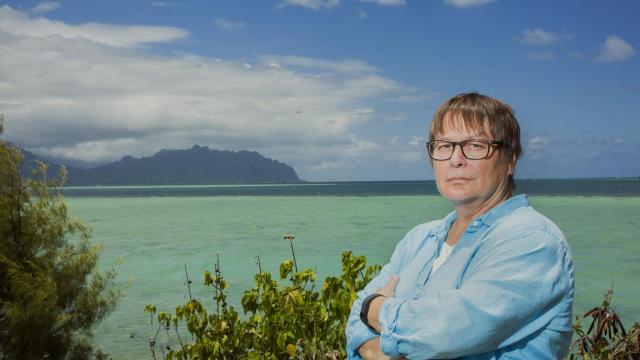 Ruth Gates, a renowned marine biologist who made it her life’s work to save the world’s fragile coral reefs from the deadening effects of warming water temperatures, died on Oct. 25 in Kailua, Hawaii. She was 56.

The Hawaii Institute of Marine Biology in Manoa, where Gates was director, announced her death, at Castle Hospital. Robin Burton-Gates, her wife, said that the cause was complications of surgery for diverticulitis. Gates also had cancer that had spread to her brain, she said.

Gates had wanted to be a marine biologist since she was a child, having been entranced by coral reefs when she saw them on the televised exploits of underwater explorer Jacques Cousteau.

“I have the utmost respect for corals,” she said in the Netflix documentary “Chasing Coral,” which was released in 2017 and won an Emmy. “They’re really sophisticated animals.”

A precious natural resource, coral reefs are often called the rain forests of the ocean because they provide a nurturing habitat for critical sources of food for millions of people, in addition to serving as a major source of tourism dollars.

But during the last few decades, at least a third of the world’s reefs, which are highly sensitive to temperature changes, have died, the victims of a rise in global warming, ocean acidification, ecotourism, pollution and commercial overfishing. Scientists say warming trends suggest that much more could be destroyed in the next 30 years, with coral serving as the canary in the coal mine for the eventual collapse of the ocean ecosystem.

Gates was one of the leading scientists trying to protect coral from such a fate. As director of the Hawaii Institute of Marine Biology, which is part of the University of Hawaii at Manoa, she was developing a “super coral” that could be bred to be more resilient to the heat and acidity assaulting the marine environment.

“I always think of the planet as a jigsaw puzzle, and there are all these pieces that must fit together to create the picture,” she said this year in an episode of the HBO documentary series “Vice.” Losing pieces like coral reefs or the polar ice cap, she said, “will ultimately wipe us out as a species.”

In addition to doing cutting-edge research, Gates brought a passion to her work that animated a larger-than-life personality and made her a sought-after public speaker and the subject of numerous videos. She was president of the International Society for Reef Studies; she spoke about her work at the United Nations and at the Aspen Ideas Festival; and she mentored a generation of graduate students.

She was, many said, a Renaissance woman.

“She could do everything well,” Burton-Gates said in a telephone interview. “She was good at computers, fantastic at business, she could remodel homes, she was a fantastic cook, she had a third-degree black belt in karate.”

She was also, Burton-Gates said, “a great athlete in school.” And, it turned out, she could sing. At a karaoke night in Honolulu in 2015, she surprised everyone and stopped the show by belting out “Diamonds Are Forever.”

Mostly, Gates, who was British, put her communications skills in the service of saving corals. And she used her command of the Queen’s English to great effect.

“She used to laugh about the fact that you could say the most inane thing, but if you had a British accent people would believe you,” Dr. Margaret McFall-Ngai, director of the Pacific Biosciences Research Center at the University of Hawaii at Manoa, said in a telephone interview.

“It’s a very rare day that you have a scientist as charismatic as Ruth,” McFall-Ngai said. “She was the Carl Sagan of coral reefs.”

Ruth Deborah Gates was born on March 28, 1962, in Akrotiri, Cyprus, where her father, John Amos Gates, was stationed while he worked in British military intelligence. Her mother, Muriel (Peel) Gates, was a physical therapist. With her parents constantly traveling, Ruth grew up chiefly in a boarding school in Kent, England.

She received a bachelor’s degree in marine biology from Newcastle University in 1984 and a doctorate there in the same subject in 1990. She did much of her initial studying of corals in Jamaica, just as Caribbean corals were starting to die. She conducted additional research at the University of California, Los Angeles, and the University of Hawaii.

She met Burton-Gates, an illustrator, in 2014 through a mutual friend. They married on Sept. 28. A brother, Tim, also survives her.

In 2013, the Paul G. Allen Family Foundation offered $10,000 for the most promising proposal to mitigate problems caused by an increasingly acidic ocean. Gates and Madeleine van Oppen, of the Australian Institute of Marine Science, won the challenge with their plan to develop highly resilient coral strains, much the way farmers breed stronger crops.

The foundation subsequently awarded them a five-year, $4 million grant, with the longer-term goal of creating a stock of tough coral strains that could replace dying coral reefs around the world.

The work has its skeptics. One major question is whether the development of these new coral strains is scalable for worldwide application. Another is whether a mechanism can be created by which the strains can be widely distributed. Yet another is whether the money can be found to pay for these very expensive undertakings.

Beyond that, some people question whether this process will actually narrow the diversity of corals, which could lead to unintended consequences.

Gates was generally unfazed by the criticism.

“I hate to say it,” she said in an interview with Fast Company magazine this year, “but climate change is doing the most obscene genetic narrowing experiment that has ever been done.”

Her laboratory remains dedicated to pursuing her work.

“Instead of dwelling on the problems corals are facing, Ruth was focused on developing and testing actual solutions,” Kira Hughes, research project manager at the Gates Coral Lab, said by email. “She took action — to do something now — that would ensure coral reefs survive into the future.”