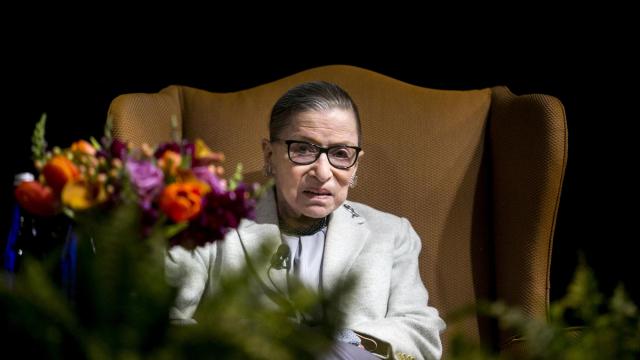 CNN — Justice Ruth Bader Ginsburg told an audience in California on Monday that even after she was diagnosed for the fourth time with cancer, she never stopped working out, although she couldn't always complete her full routine.

"I do pushups," the 86-year-old told an audience at Berkeley Law, adding that she planks, "both front and side," as well as does weight-bearing exercises with her personal trainer.

Asked how she is feeling now, Ginsburg said that compared with six months ago she is doing "very well."

The comments come as the Supreme Court is on a brief recess after its first sitting. Ginsburg was an active participant on the bench as the court heard a blockbuster LGBT case and decided to add other significant issues to an already robust docket.

On Monday, she repeated something she's said before, that her cancer has left her with a "zest for life that you haven't had before. You count each day as a blessing."

The oldest Supreme Court justice, who inspired the meme "Notorious RBG" and has been the subject of a CNN documentary and a feature film in recent years, missed oral arguments earlier this year for the first time while recovering from her third bout with cancer, but participated in rulings via court transcripts and in writing.

Admired by many for how she has dealt with cancer, she is also viewed as a fitness role model. Her workout routine is well-known and mentioned in "The RBG Workout: How She Stays Strong ... and You Can Too!" a book by her personal trainer, Bryant Johnson.

Although her health has long been an issue, she does not let it slow her down.

In 1999, she successfully underwent surgery for colon cancer. She was treated for early-stage pancreatic cancer in 2009. Last December, Ginsburg underwent surgery to remove two cancerous nodules from her left lung. She was back working out once she was released from the hospital.