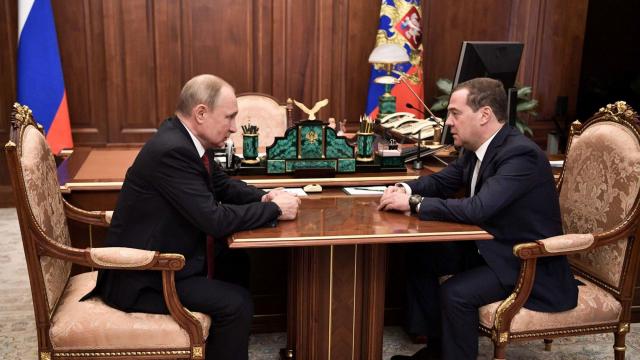 CNN — The entire Russian government is resigning, Prime Minister Dmitry Medvedev announced Wednesday, after Vladimir Putin proposed sweeping reforms that could extend his decades-long grip on power beyond the end of his presidency.

Putin thanked members of the government for their work but added that "not everything worked out." Putin added that in the near future he would meet with each member of the cabinet. The mass resignation includes Medvedev.

The surprise announcement came after Putin proposed constitutional amendments that would strengthen the powers of the prime minister and parliament at the expense of the presidency.

Taking power from the presidency and handing it to parliament could signal a power shift that has been long speculated about in Russia.

Putin's critics have suggested that he is considering various scenarios to retain control of the country after his presidential term ends in 2024, including the option of becoming prime minister with extended powers. Similarly, in 2008 Putin swapped places with the prime minister to circumvent the constitutional provision banning the same person from serving two consecutive terms.

In his statement, Medvedev indicated that the government was resigning to clear the way for Putin's proposed reforms.

"In this context, it's obvious that we, as the government ... should provide the president of our country with the opportunity to make all the decisions necessary for this. And in these conditions, I believe that it would be right, in accordance with Section 117 of the constitution," for the government to resign, Medvedev added.

In his annual address to the Federal Assembly earlier Wednesday, Putin said he agreed that no one should serve as president for more than two consecutive terms, and proposed several constitutional amendments.

His key proposal is to transfer the power to select the prime minister and cabinet from the president to the parliament.

"I know that a constitutional provision is being discussed in our society that the same person should not be president for more than two consecutive terms," Putin said. "I don't think this is a fundamental issue, but I agree with that," he said.

"I propose ... entrusting the State Duma with the power to approve the candidacy of the prime minister, and then, per the prime minister's proposal, [appoint] all deputy prime ministers and federal ministers," Putin said. "In this case, the president will be obliged to appoint them, that is, he will not have the right to reject parliament-approved candidacies."

According to the current constitution, the president needs to secure approval from the lower house of parliament to appoint the head of the government, and it is within presidential rights to then appoint all deputies and ministers.

In a televised statement, Putin asked current members of government to fulfill their duties until a new one is formed.

"I want to express satisfaction with the results that have been achieved," Putin said. "Of course not everything worked out, but nothing ever works out in full."

Medvedev is expected to become deputy chairman of Russia's Security Council. Putin is the chairman.