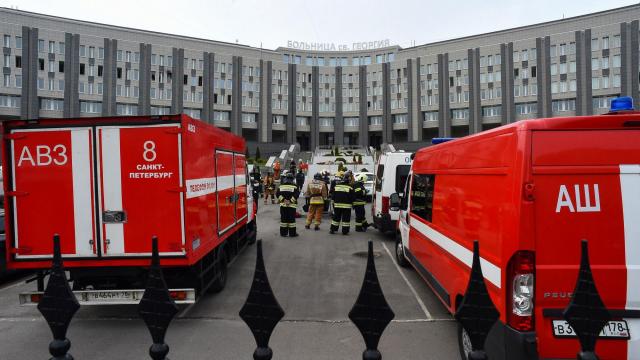 By Analysis by Nathan Hodge, CNN

CNN — A fire in a hospital treating coronavirus victims claimed the lives of five patients and forced the evacuation of 150 people in the Russian city of St. Petersburg on Tuesday, further testing the Russian government's response to the Covid-19 pandemic amid a growing crisis that has reached the Kremlin's inner circle.

According to initial findings, the fire may have been caused by a short circuit in a ventilator or its malfunction, state news agencies said. The Investigative Committee, Russia's top law enforcement body, said a criminal investigation had been opened into the matter.

The grim news from St. Petersburg was quickly overshadowed by the disclosure that Dmitry Peskov, Russian President Vladimir Putin's longtime spokesperson, had been hospitalized with coronavirus.

Peskov told Russian state news agency TASS that the last time he had seen the President in person was "over a month ago," but the news follows the hospitalization of Russian Prime Minister Mikhail Mishustin for coronavirus and is likely to intensify concerns about Putin's own health.

Tuesday's fire in St. Petersburg was the second fatal incident in days involving a hospital treating coronavirus patients. On Saturday, a blaze erupted in an intensive-care wing of a Moscow coronavirus hospital, killing one person and forcing the evacuation of patients, Russian state news agencies and officials stated.

While investigations are ongoing in both incidents, a law-enforcement official told TASS that officials were examining the ventilators involved in Saturday's and Tuesday's incidents, saying they were produced by the same Russian manufacturer.

Those incidents occurred as the spread of coronavirus appears to be cresting. Russia on Tuesday reported 10,899 more coronavirus cases on Tuesday, bringing the total number of confirmed cases in the country to 232,243. The country is now ranked second in the world for confirmed cases, behind the US, according to Johns Hopkins University data. Moscow is the worst hit city in Russia, with 121,301 cases.

Coronavirus has become a cascading crisis for Putin. In March, oil prices collapsed after Saudi Arabia launched a price war against Russia, its onetime ally in energy markets. The immediate trigger was Russia's refusal to sign on to an OPEC proposal to prop up oil markets by extending production cuts. Russia and Saudi Arabia subsequently struck a new production-cut deal, but oil prices -- an important source of income for the Russian government -- are still very depressed, having been battered by the slump in economic activity caused by the pandemic.

That's raised serious questions among Russia watchers about the Kremlin's ability to respond to the economic fallout from the coronavirus pandemic. Putin is already under fire for refusing to tap a rainy-day fund created by previously high energy prices to revive the economy, particularly small businesses.

In televised remarks Monday, Putin said his priority was "getting the economy back on track as soon as possible."

But Putin appears distant and detached as he presides remotely over the government's response to coronavirus from his residence at Novo-Ogaryovo. Russians may be used to seeing an image of Putin that is carefully managed by the Kremlin's PR machine, but his appearances in video conferences project very little macho swagger.

And his management style has been curiously passive. On Monday, Putin said the government would begin lifting nationwide "non-working days" -- the official shorthand for paid holidays for Russian employees -- around the country.

But Putin has delegated the difficult work of easing lockdown to regional governors, who must decide when conditions are right to lift restrictive measures. And that's where the seriousness of the crisis is reflected: local leaders have already moved to prolong lockdown measures.

That's clear in the capital, where Moscow Mayor Sergey Sobyanin announced that restrictions would remain in place until May 31. Moscow authorities have tightened the rules by mandating the wearing of masks and gloves in public.

The reasons for this are clear: The public-health crisis has been severe. Moscow saw a year-on-year surge in its monthly mortality rate in April, as well as compared to the April average for the past decade, according to data released by the city's civil register office.

In an interview on state news channel Rossiya-24, the Moscow mayor said screening studies found that infection rates were around three times higher than the officially confirmed number. And in St. Petersburg, scene of Tuesday's fire, cases also continue to rise -- according to Russia's coronavirus headquarters, the city now has 8,050 confirmed cases, adding 339 over the past 24 hours.