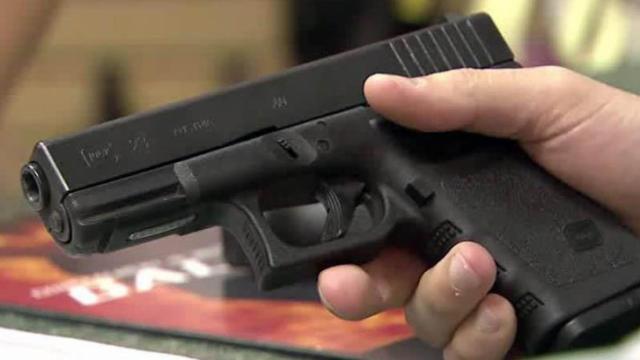 Raleigh, N.C. — Editor's Note: Effective Oct. 1, 2013, North Carolina state law requires that county sheriffs keep confidential the list of those who apply for and are granted permits to carry a concealed weapon.

In the spirit of that law, and because the law would preclude the ability to keep any data on concealed carry permits current, WRAL has removed removed data related to concealed handgun permits from this page.

"We get women who are terrified, who come in and say, 'My husband said I need to learn to shoot this,'" Elrod said, demonstrating how some first-time shooters hold a gun by its butt end between his thumb and index finger.

Elrod sells and repairs guns at the Bear Creek Gun Shop, tucked inside NC Hunter Supply on Millbrook Road in Raleigh. Along with his wife, he also teaches gun safety classes. Among the couple's most popular is the class required for those who want a concealed weapons permit to stow a handgun in their purse or under a suit coat.

Roughly 3 percent of North Carolina's 9.6 million residents hold a concealed weapons permit, a number that is small but on the rise. Elrod said that he teaches classes to a variety of people, including soldiers who want to be able to carry in civilian life, crime victims who want to feel more secure and, increasingly, senior citizens.

"Some of them say it's the criminal element," said Peggy Elrod, Charles' wife and co-instructor.

The Elrods' class is typical of similar classes around the state. It involves a day-long or two evening classroom sessions as well as time spent qualifying on a gun range. State law requires that those who want to qualify hit the target 28 out of 40 shots fired.

"We tell each of them, 'We hope you never, ever have to do this,'" Charles Elrod said. "But in the event you do, we've got to be certain you can hit that bullseye and not hit anyone else, because if you hit bystanders you're in trouble."

By contrast, more than 6 percent of the residents of Cherokee County in the far western portion of the state have a permit and all of the top 10 counties in per capita ranking are from counties west of Charlotte.

"These people are fiercely independent out here," said Sen. Jim Davis, R-Macon, who represents six of the counties where residents are most likely to hold concealed weapons permits, including Cherokee. Some of that, he said, has to do with a rural culture that includes hunting and a certain level of comfort with guns.

In 2011, the General Assembly expanded the places where concealed weapons permit holders can take their guns – including state parks – and put the "Castle Doctrine" into law, which presumes gun owners acted correctly in self-defense if they shoot someone invading their home or car.

While gun-rights advocates hailed that bill as a victory, they sought more rights from lawmakers this year. One bill that failed would have removed a prohibition on permit holders carrying guns into restaurants where alcohol is served as long as the individual with the gun did not drink. That measure cleared the House but did not pass the Senate.

"My default position is that people ought to have the right to carry wherever they have the right to lawfully be," Davis said. But he said police and sheriffs raised questions about the restaurant carry law. "I don't think the statistics back them up on this, but I do understand my law enforcement people's concerns."

Senate leaders have said they plan to revisit the restaurant carry measure next year. Republicans, who controlled the legislature this year, say that permit holders are largely law-abiding citizens who go out of their way to get training and testing that someone with bad intentions would not.

"I think if they want to carry outside of their home, they should have more training," she said, arguing that permit holders should have to renew their license every two years rather than every five, and that the renewal should include a re-test of their proficiency in firing a weapon.

While sheriffs can require someone to re-take their concealed weapons test to renew a permit, few do so, say instructors and others knowledgeable about the process.

"We're not afraid they'll all turn into criminals," Neely said, although she does point to reports that suggest concealed weapons permit holders aren't as law-abiding as they are reputed to be. Rather, she worries about the unintended consequences of having more guns around. For example, rates of successful suicide are higher in areas with higher rates of gun ownership, she said.

Neely said police officers are highly trained to make life and death decisions. Those who want to take a similar responsibility on themselves should have to prove they're up to the task.

Charles Elrod said that the training he offers is rigorous and focused on safety. Asked what changes he would like to see to the concealed weapons permit laws, Elrod said he'd like North Carolina to make it easier for residents who move here from elsewhere to have permits from other states recognized.

"It really taxes people to have to go through this whole thing again," he said.

Figuring he's trained somewhere around 500 people in his concealed weapons class over the past five years or so, Elrod said people should be able to make the choice to look after themselves.

"It's better to have it and not need it than to need it and not have it," Elrod said.