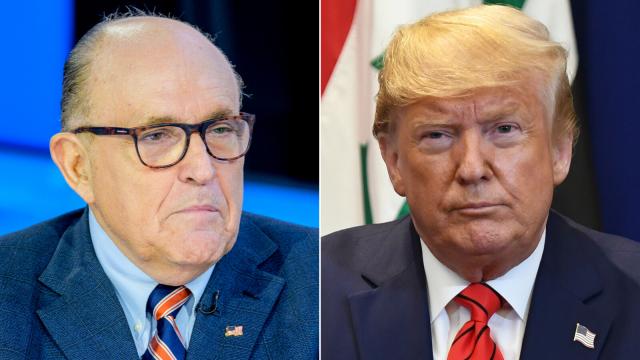 CNN — Rudy Giuliani, representing President Donald Trump's campaign, tried to deliver a sweeping broadside against mail-in voting Tuesday in a federal courtroom, only to face questions from a judge who suggested that the President's campaign shouldn't even be in court.

Judge Matthew Brann of the Middle District of Pennsylvania hasn't yet ruled on whether the Trump campaign could block Pennsylvania's election results by claiming constitutional violations.

Instead, the judge listened patiently for hours on Tuesday in Williamsport, then lobbed tough questions to Giuliani and other Trump lawyers. The Trump campaign has made bold swings at President-elect Joe Biden's win in Pennsylvania, and the state's use of mail-in ballots, claiming that two voters in Lancaster and Fayette counties couldn't cure absentee ballots they cast with procedural mistakes in them, while those in other counties were allowed to correct ballot problems.

"You're alleging that the two individual plaintiffs were denied the right to vote," Brann asked the Trump campaign attorney at one point, "But at bottom, you're asking this court to invalidate more than 6.8 million votes, thereby disenfranchising every single voter in the Commonwealth. Could you tell me how this result could possibly be justified?"

The entrance in court of Giuliani, the former New York City mayor and federal prosecutor who hadn't argued before a trial judge in decades, signals an approaching end to the Trump campaign's wild legal scramble in court to stop the formalization of Biden's victory.

Since the election, in news conferences and other appearances, Giuliani has pushed conspiracy theories about voter fraud and promised a dazzling legal strategy that hasn't materialized. He's also clashed with election law brass in the Trump campaign, as the President has refused to concede or even acknowledge Biden's win.

Tuesday, Giuliani argued that the Trump campaign has been blocked from observing ballot processing in key cities and saying Democrats could have conspired to commit election fraud by counting absentee votes -- both assertions others judges have rejected repeatedly in court as unfounded or wrong.

"If this is allowed without serious sanctions, this will become an epidemic," Giuliani said. "It just all happened to be in big cities controlled by Democrats who all of a sudden decided you don't have the right to inspect an absentee ballot. ... You'd have to be a fool to think this was an accident."

Brann, an Obama appointee who is a longtime Republican, pressed the campaign on why it believed it could carry forward grievances of voters in court, when the individuals themselves are not allowed to sue over broad election mismanagement in the federal system. He asked why the campaign had come to a federal court at all, when allegations about local officials could have been taken to state court.

Giuliani's answers largely stuck with generalizations that Democratic-leaning counties had conspired to hurt the President, and that absentee voting was unfair when counties administered it differently.

At one point, Giuliani admitted the state court had dried up as an avenue for the Trump campaign complaints. At another point, when pressed, Giuliani admitted he wasn't alleging voter fraud -- but did still believe in the idea that fraud could exist.

"No, your honor, we are not" alleging fraud, Giuliani said, after Brann reminded him a newer version of the Trump campaign's lawsuit cut back those claims. It's a "fraudulent process," Giuliani continued.

"So you are alleging a fraud," the judge responded, noting that would require a higher standard than suspicion to bring a case.

Trump and his backers have faced ridicule from the legal community for bringing meritless lawsuits to challenge the election and spread disinformation to undermine Biden's win, and legal experts have repeatedly said the cases won't give Trump a second term in office.

Since the election, judges in multiple states have quickly rejected the Trump campaign's and his supporters' suspicions of voting fraud, because even in-court witnesses have shown no reason to believe there's widespread fraud.

The Pennsylvania Supreme Court even added to the Trump campaign pile on, releasing an opinion just after Giuliani finished his opening arguments. The state's highest court essentially undercut Giuliani's argument to Brann that ballot processing observers had been treated so unfairly by Democratic-run city governments, they were entitled to a court's help.

"The state courts are virtually closed to us now," Giuliani acknowledged to Brann, after receiving the state high court's ruling.

The Pennsylvania federal case has always been extremely unlikely to succeed. But among a smattering of legal complaints, it's considered the most notable of Trump's last-ditch efforts to block battleground state's votes for Biden.

It certainly drew the most attention. On Tuesday, tweets from legal experts and reporters, including some in Williamsport, catalogued the proceedings in real time, with a particular focus on how Giuliani hasn't argued in a courtroom in decades.

At times, the former New York mayor and federal prosecutor appeared to approach the case like a criminal trial instead of a lawsuit in its early stage, announcing "exhibits" he had brought for the judge and describing "charges" in the lawsuit.

He also appeared to confuse legal terminology at times, or answer the judge's questions about specific case law with colloquialism. When asked what type of scrutiny the judge should apply in the case -- a type of question that has specific legal terms for possible answers -- Giuliani answered: the "normal" kind. When the judge then asked about "rational basis scrutiny," a specific legal term for weighing constitutional cases, Giuliani responded by calling the vote processing situation in the state not rational.

At one point 8,000 people in total listened to the proceeding on two phone lines.

Mark Aronchick, a lawyer for a handful of Pennsylvania counties who argued against Giuliani, called his time in court "disgraceful," during his own argument time before the judge.

Another lawyer in court Tuesday, David Zionts of the NAACP, noted that election procedure challenges had to have been brought before the election, not after.

Still, the case won't be resolved for days.

Brann said he would consider more arguments in writing in the coming days, and canceled a hearing planned for Thursday where witnesses could have testified. He then encouraged lawyers to stay in the remote north-central Pennsylvania town for dinner and a drink, perhaps with the opposing side. "A lot of these arguments can be cured with a drink and dinner," he said.

Jenna Ellis, another lawyer for Trump, tweeted after the hearing that she believed Giuliani had established "great rapport" with the judge.

This story has been updated with details of Tuesday's hearing.