Rucho: Health law more harmful to US than Nazis 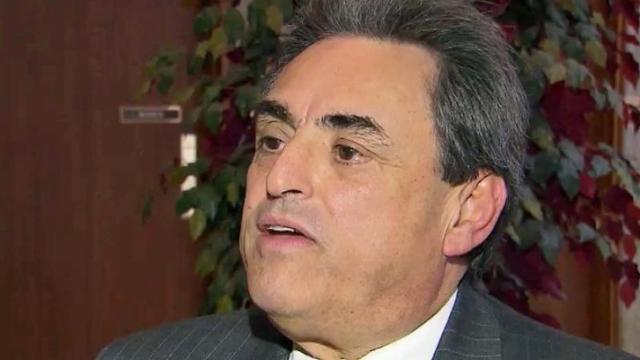 "Justice Robert's pen & Obamacare has done more damage to the USA then the swords of the Nazis,Soviets & terrorists combined," Rucho wrote via Twitter, the social networking site.

Rucho's reference to U.S. Supreme Court Chief Justice John Roberts is a call back to the court's June 2012 vote to find the bulk of the Affordable Care Act constitutional. Roberts, a conservative jurist appointed by President George W. Bush, wrote the majority opinion in the case.

"I was concerned about the fact that there are 6 million people who have lost their health care due to Obama," Rucho said, referring to those in the private insurance market who have had to get new insurance policies as a result of the health care law.

Rucho said there will be millions more who could see changes in health coverage when additional requirements for employers kick in next summer.

It's not exactly a surprise that Rucho opposes the law. He was a primary sponsor of a bill last year through which North Carolina rejected the expansion of Medicaid in the state – a key feature of the federal plan. Rucho is a top lieutenant of Senate President Pro Tem Phil Berger, chairing the chamber's Finance Committee and playing a leading role on initiatives such as this year's tax rewrite. 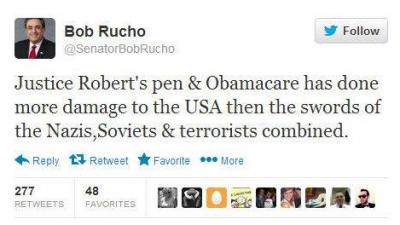 However, the references in his tweet are loaded. In Internet discussion forums, references to Nazi atrocities is viewed as particularly vitriolic, not least because Nazi Germany killed millions of Jews and others and was the instigator in World War II. According to the Congressional Research Service, 405,399 members of the military were killed during World War II. The references to terrorism raises the more recent history of 9/11 and the terrorist hijacking of four planes that crashed in New York, Washington and Pennsylvania on Sept. 11, 2001.

Again, Rucho stressed he was talking about the economic, not moral cost, of events.

His comment has drawn attention from his hometown newspaper as well as national liberal groups such as Think Progress and national media organizations such as New York Magazine. Response on Twitter has run from people cheering him on to approbation.

"I think we're putting something out on that today," said Sen. Martin Nesbitt, D-Buncombe, when asked about Rucho's comments. He described his fellow state senator's comments as "outrageous," but asked to defer further comments.

Nesbitt later added via email that Rucho's "comments this weekend illuminated a very troubling world-view. It should be clear that Bob Rucho is not a fringe outlier in the Senate, but a vocal member of Republican leadership. This is the man responsible for gerrymandering legislative districts, shifting North Carolina's tax burden onto the backs of working families, the reckless and wasteful seizure of Charlotte's airport, and a voter suppression law that has made North Carolina the target of a Justice Department lawsuit.

"Governor McCrory and Republican leadership have stood with Bob Rucho on the rest of his ludicrous agenda, so I think it’s fair to ask where they draw the line?" Nesbitt wrote.

"The tweet is highly offensive and he should apologize," Pope said.

Rucho was far from apologetic Monday morning. Asked why he didn't try to make his larger point in an opinion piece in a newspaper, Rucho responded, "It would be nice if someone would accept some of those op-ed pieces."

Twitter famously limits the amount of verbiage allowed in each post. "You've got 140 characters and you do your best to explain your situation," he said.

Later in the day, on WBT radio in Charlotte, Rucho was asked about Pope's call for him to apologize for his comments.

"There's no way I'm going to apologize for saying the truth," Rucho said.