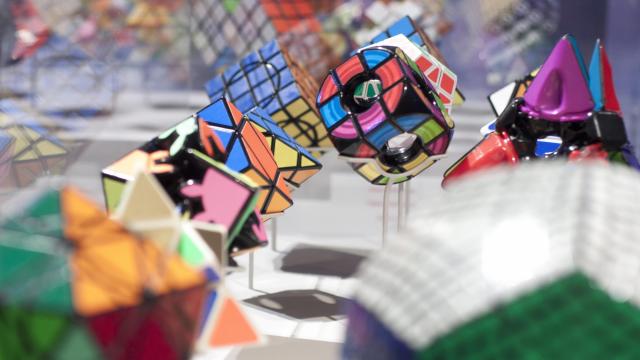 I wrote about Discovery Place last week, the sprawling family museum in uptown Charlotte. When I scanned the website last week, I quickly honed in on one big announcement: The museum will open Beyond Rubik's Cube, an exhibit all about the cube on Saturday.

Now, I don't know about your kids and their schools, but Rubik's Cubes are such a thing at my kids' school that teachers have had to put their foot down. Once school lets out, you'll see kids pull the puzzles from their book bags and immediately start working out the solution. My older daughter is better at it than I ever was! For a simple puzzle that launched in the 1980s, it's had amazing staying power.

In fact, Kaitlin Rogers, Discovery Place's director of public relations, tells me that more than 1 billion people have owned a Rubik's Cube and one out of every seven people on the planet have played with one.

Rogers said museum staff weren't exactly sure what the current interest was until they sought applications from cube enthusiasts as part of the exhibit opening. Rogers said they figured they'd get a dozen fans who were kids when it launched. They got 145 applications and most were from kids who are 15 years and under.

The exhibit tells the story of the inventor, how and why he created it and what made it such a world wide phenomenon. Artifacts include the inventor's personal workshop and the world's most expensive cube, which is made of gold and jewels and is valued at $2.5 million. There's even a Rubik's Cube the size of a car that allows visitors to see through the construction to understand how the mechanism works.

There are lots of hands-on activities as well. Visitors can interact with Rubik's Cube experts at the Solve Bar; discover the parallels between computer programing and cube solving; and challenge a speed-cubing robot to solve their scrambled cube. There also are activities for kids who might be too young for the Rubik's Cube, including a game of colored building blocks.

The exhibit covers the gamut of STEM topics and more - including science, technology, engineering, robotics, popular culture, architecture and mathematics. "It's all encompassing," Rogers said.

The grand opening on Saturday will include a celebration of Charlotte area cubers and other activities. The exhibit runs through Sept. 5.

Admission to the exhibit is included with a purchase of tickets to Discovery Place, which are between $13 and $17 per person. And, there's a special deal starting Saturday: Every Saturday through the run of the exhibit, you'll get free admission if you can solve the cube in under two minutes. You'll find the cube tent at the admission area.

Charlotte is about three hours from Raleigh.