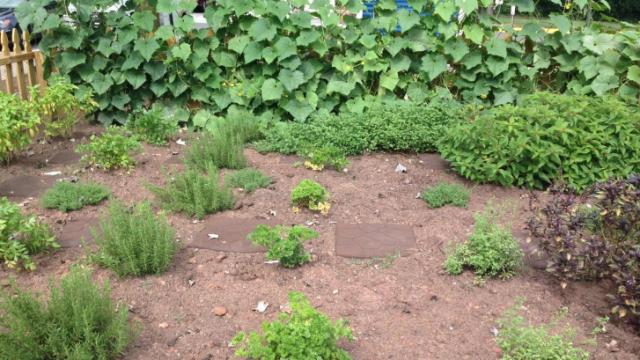 Durham, N.C. — Behind the Sheraton Imperial Hotel and Convention Center there is something growing. Cucumbers, mint, thyme and peppers are all coming alive in an employee-built garden located in the back of this Research Triangle Park hotel.

The garden is part of the hotel's initiative to become more green and local. The hotel's composting program, launched this summer, has helped provide the soil for this food to flourish. In turn, the herbs and vegetables are used at its restaurant, Seasons.

Seasons, which is locally owned and managed by the Sheraton Imperial, launched a farm-to-table menu with focus on North Carolina ingredients earlier this year. Since then, it has become increasingly more popular than the restaurant's standard dinner menu that includes staples like steak and crab cakes.

The commitment to local ingredients has been there for years, but getting the vendors and resources together took some time, Sheraton Imperial director of food and beverage John Walsh said.

Everything came to fruition after the hotel hosted the North Carolina Farm Stewardship Conference, an annual gathering of 800 local, sustainable farmers from North and South Carolina, last year. The hotel built connections with vendors including Eastern Carolina Organics (ECO), Firsthand Foods and Local Seafood. In November 2013, the restaurant started incorporating their ingredients into lunch and dinner menus.

After a great response from diners and staff, the restaurant launched a farm-to-table menu in February. The menu changes every two weeks.

“Everyone at Sheraton Imperial has really bought into the farm-to-table concept, which speaks volumes of both the restaurant and hotel’s staff,” Seasons executive chef El Haj Tayouga said.

Eight nations in the kitchen

Every week, Tayouga gets a list of the freshest ingredients available. He then meets with his team to build the menu to showcase these items. Tayouga, originally from Morocco, has a diverse staff that represents eight nations.

Every other Monday, Tayouga meets with servers and staff to go over each dish and its origins. During these meetings, he has a map to highlight where each ingredient came from and its origins. He then fields questions from servers.

Before everyone gets to taste each dish, photos are taken of the food. The images will be available on an iPad, so diners can view what each dish looks like.

As early as this week, Seasons plans to launch farm-to-table breakfast and lunch menus that include farm fresh eggs and sausage.

And the menu isn't the only thing that has North Carolina roots at Seasons. Eight of the 10 taps at the bar house locally made beer.