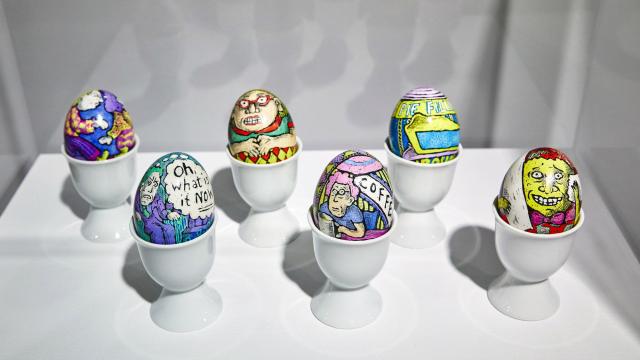 NEW YORK — Roz Chast is the poet laureate of urban neurosis. Over nearly four decades, her cartoons in The New Yorker have captured a certain kind of anxious city dweller: sometimes roaming streets teeming with odd signs and portents, but just as often sitting on a lumpy couch in a nondescript living room, battling obsessive thoughts.

“The Masters Series: Roz Chast,” a retrospective at the SVA Chelsea Gallery through Dec. 15, offers an immersion in all things Chast. There are hundreds of original cartoons and drawings for the magazine and her more than 20 books. But the show also includes less familiar work, including childhood drawings and student sketchbooks, which have not previously been exhibited, and examples of her hooked rugs, embroidery, Ukrainian-style Easter eggs and other crafts (not to mention a few walls covered with Chast-designed wallpaper).

For a certain kind of devotee, however, the pièce de résistance may be “The M.R.I. of Love,” a life-size, Instagram-ready installation based on one of her cartoons, tucked away in the last of the show’s four rooms. Visitors are very much invited to lie down inside it. So is Chast going to try it out?

“I’m not sure,” she said by telephone, before a visit to the gallery, where she at least perched at the edge of it. “I love that they did it, but — knock on wood — I’m terrified of medical things.”

We talked to Chast, 64, about starting out as a cartoonist, why she loves crafting and the thing she hates drawing the most. These are edited excerpts from the conversation.

Q: The earliest drawings in the show were made when you were about 3. When did you get the idea that you might become a cartoonist?

A: I always drew — always, always, always — from when I was really young. As far as thinking of myself as a cartoonist, that started when I was 12 or 13. I loved the underground stuff, and also MAD magazine, with the fake ads and everything else. Some of the sketchbooks in the show are things I did as a teenager to keep myself sane. I can still see things from back then that are very connected to what I do now. For better or worse, I had a style.

Q: One of the notebooks is shown open to a real New Yorker cover that you doctored, inserting a giant woman you drew into a midtown streetscape, King Kong-style. So maybe that was your unofficial first cover?

A: I just liked to take things and draw stuff in. I still do that. I was in Minnesota last weekend, and in the airport I saw a brochure for a Museum of Spam. I didn’t have a chance to go there, so I fooled around with it on the iPad and posted something on Instagram. Q: The show includes some of the first cartoons you published, in a gay men’s magazine called Christopher Street, in 1977, right after you graduated from art school. How did you start publishing there?

A: When I got out of RISD [Rhode Island School of Design], I never thought I’d be able to make a living as a cartoonist. I didn’t really know where I would fit in: What I did wasn’t really underground, and it wasn’t really New Yorker-like either. I was living with my parents in Brooklyn, and I would take around a portfolio of illustrations. I got a bit of work, but I just thought, “God, I hate this.” I didn’t want to be an illustrator. It’s going to sound so corny, but I was looking for some kind of sign. And then one day I found a copy of Christopher Street on the subway. I saw they used cartoons, so I called them up, and started selling them cartoons, for 10 bucks each.

Q: In a video in the exhibition, you open up some huge filing cabinets in your home office filled with cartoons rejected by The New Yorker over the years. Yet you got your first cartoon, showing the imaginary objects described by nonsense words, accepted on the first try. Were you surprised?

A: In April 1978, I thought, Why not? I sent them a huge batch of stuff. It must’ve been about 60 cartoons. The one they took was probably the most personal of the whole bunch, the kind of thing that I would do just to make myself laugh. I think the reaction [to that cartoon] from some of the older people wasn’t happy. Years later, Lee Lorenz [the magazine’s former cartoon editor] told me that an older cartoonist had asked if he owed my family money.

Q: You still submit to the magazine almost weekly. What is your routine like?

A: The deadline is Monday. I’m always jotting down ideas on various pieces of paper throughout the week. But I like some adrenaline, so I draw them all on Monday, and work on books or other projects the rest of the week. The batch — that’s what we call it — is still in many ways the heart of everything else. Sometimes I’ll be working and then out of the blue, something will just happen.

Q: The show includes examples of your Ukrainian-style decorated eggs, stamped prints, hooked rugs and embroidery, some of which has popped up in your work in The New Yorker, like the “Motherboard” tapestry featured on the cover last year. Were you always a crafter?

A: Periodically I get obsessed with a certain craft. Sometimes I try something and it doesn’t jibe with my style, so I have to lay it aside. I started the eggs about 10 years ago, and went on from that to the prints, then the rugs, then the embroidery. Right now I’m completely obsessed with the iPad, which is a whole different thing. I suspect at some point I’ll do some more embroidery. I have a ton of thread that’s making me very itchy in a good way. Q: The first thing visitors to the exhibition will see is the streetscape mural inspired by your 2016 book, “Going Into Town,” which was based on a handmade guidebook to New York you made for one of your children.

A: I’ve said before, what I love about New York is the visual density. It’s so pleasurable to look at so much stuff, smashed together, at different levels. You just look up and it’s like, “What is that? Some obscure furrier from 1938?” People say New York has changed, but things like that still do exist, especially on the obscure side streets.

Q: You have said that your least favorite thing to draw is the woods, even though you live in the woods, in Connecticut. What’s so terrible about the woods?

A: I like to draw out of my head, and I can draw interiors until the cows come home. I like coffee tables, I like toasters, I like shelves filled with knickknacks. I like drawing pillows and mugs and baskets with weird crap in them. I don’t even know what you put in a woods. There’s like five things: trees, branches, stones — What else? Maybe squirrels? I’ll have to leave that to people with more woods-imagination.