Roy Hargrove, Trumpeter Who Gave Jazz a Jolt of Youthfulness, Dies at 49 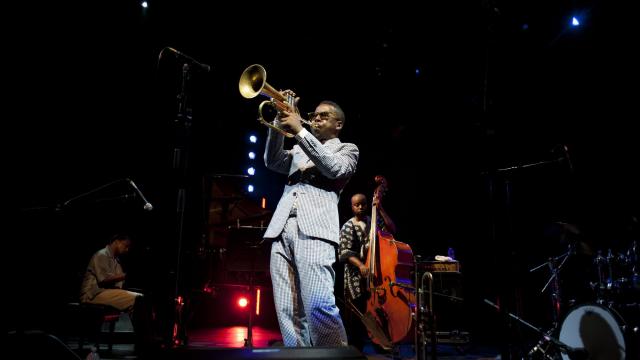 Roy Hargrove, a virtuoso trumpeter who became a symbol of jazz’s youthful renewal in the early 1990s, and then established himself as one of the most respected musicians of his generation, died Friday in Manhattan. He was 49.

His death, at Mount Sinai Hospital, was caused by cardiac arrest brought on by kidney disease, according to his manager, Larry Clothier. He said Hargrove had been on dialysis for 13 years.

Beginning in his high school years Hargrove expressed a deep affinity for jazz’s classic lexicon and the creative flexibility to place it in a fresh context. He would take the stock phrases of blues and jazz and reinvigorate them while reminding listeners of the long tradition whence he came.

“He rarely sounds as if he stepped out of a time machine,” critic Nate Chinen wrote in 2008, reviewing Hargrove’s album “Earfood” for The New York Times. “At brisk tempos he summons a terrific clarity and tension, leaning against the current of his rhythm section. At a slower crawl, playing fluegelhorn, he gives each melody the equivalent of a spa treatment.”

In the late 1990s, already established as a jazz star, Hargrove became affiliated with the Soulquarians, a loose confederation of musicians from the worlds of hip-hop and neo-soul that included Questlove, Erykah Badu, Common and D’Angelo. For several years the collective convened semi-regularly at Electric Lady Studios in Manhattan, recording albums now seen as classics. Hargrove’s sly horn overdubs can be heard, guttering like a low flame, on records like “Voodoo,” by D’Angelo, and “Mama’s Gun,” by Badu.

“He is literally the one-man horn section I hear in my head when I think about music,” Questlove wrote on Instagram after Hargrove’s death.

Even as he explored an ever-expanding musical terrain, Hargrove did not lose sight of jazz traditions. “To get a thorough knowledge of anything you have to go to its history,” he told writer Tom Piazza in 1990 for an article about young jazz musicians in The New York Times Magazine. “I’m just trying to study the history, learn it, understand it, so that maybe I’ll be able to develop something that hasn’t been done yet.”

In 1997 he recorded the album “Habana,” an electrified, rumba-inflected parley between American and Cuban musicians united under the band name Crisol. The album, featuring Hargrove originals and compositions by jazz musicians past and present, earned him his first of two Grammy Awards.

His second was for the 2002 album “Directions in Music,” a live recording on which he was a co-leader with pianist Herbie Hancock and tenor saxophonist Michael Brecker. That album became a favorite of jazz devotees and music students trying to envision a future for acoustic-jazz innovation.

In the 2000s, Hargrove released three records with RH Factor, a large ensemble that built a style of its own out of cool, electrified hip-hop grooves and greasy funk from the 1970s.

He held onto the spirit that guided those inquiries — one of creative fervor, tempered by cool poise — in the more traditionally formatted Roy Hargrove Quintet, a dependable group he maintained for most of his career. On “Earfood,” a late-career highlight, the quintet capers from savvy updates of jazz standards to original ballads and new tunes that mix Southern warmth and hip-hop swagger.

By his mid-20s, Hargrove was already giving back to the New York jazz scene that had made him its crown prince. In 1995, with vocalist Lezlie Harrison and organizer Dale Fitzgerald, he founded the Jazz Gallery, a little downtown venue that today stands as New York’s most reliable home for cutting-edge presentations by young jazz musicians.

Into his final days, dogged by failing health, Hargrove remained a fixture of the jam sessions at Smalls in Greenwich Village. When not on tour, he spent multiple nights each week in that low-ceilinged basement, his slight, nattily dressed frame emerging occasionally from a corner to blow a smoky, quietly arresting solo.

Roy Anthony Hargrove was born on Oct. 16, 1969, in Waco, Texas, to Roy Allan and Jacklyn Hargrove, and raised primarily in Dallas, where his family moved when he was 9. His father served in the Air Force and then worked in a factory for Texas Instruments. His mother held clerical jobs, including as an administrator at the Dallas County Jail.

Roy Hargrove is survived by his mother; his wife, Aida; a daughter, Kamala; and his brother, Brian. Quiet and retiring by nature, Hargrove developed a close attachment to music. “My parents weren’t around that much; I was pretty much in solitude,” he told Piazza. “Originally I wanted to play the clarinet, but we didn’t have any money. My dad had a cornet that he’d bought from a pawnshop, so I just played that. I learned to love it.”

When Hargrove was in 11th grade, trumpeter Wynton Marsalis visited his high school during a tour stop in Fort Worth, asking to hear the young phenom. Marsalis was so impressed that he invited Hargrove to join him at a nearby club date. That led to a trip to Europe in the summer before his senior year to take part in the North Sea Jazz Festival in The Hague as a member of an all-star band.

After a year at the Berklee College of Music in Boston, Hargrove moved to New York City in 1990, at 20. He briefly attended the New School, but his home base was Bradley’s, the Greenwich Village club and jam-session hub peopled by many of jazz’s most esteemed elders. He usually stayed until closing each night. (Bradley’s closed in 1996.)

For his first six months in New York, he slept on the couch at the home of Wendy Cunningham, the owner of Bradley’s. By the end of that time, he had recorded a well-regarded debut album, “Diamond in the Rough,” for RCA and become the talk of the town.

“Among the newcomers, the one name everyone mentions is Roy Hargrove,” Piazza wrote in 1990. “His playing incorporates a wide, rich sound, something like that of the great Clifford Brown,” he added. “Barely out of his teens, Hargrove is a mixture of shyness and cockiness, boyish enthusiasm and high seriousness. Music is his whole life.”

New Orleans trumpeter Nicholas Payton, who rose to prominence alongside Hargrove in the early 1990s, reflected on his significance in a blog post on Saturday. “I often say two things changed the New York City straight-ahead music scene: Art Blakey passing and Bradley’s closing,” Payton wrote. “Now I have to add a third, the departure of Roy Hargrove. New York will not be the same without you.”