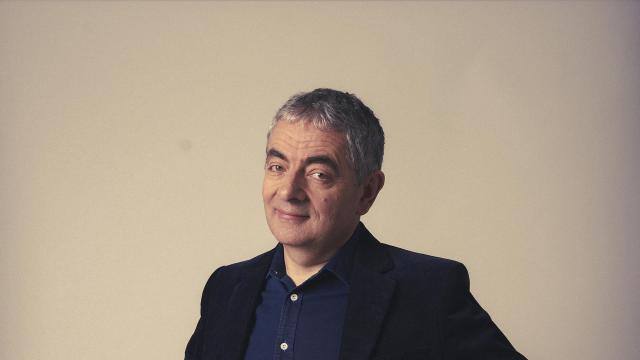 Comedy can be a dreadful business, even for a gifted funnyman like Rowan Atkinson.

Consider “Johnny English Strikes Again” — starring this rubbery-faced, Gumby-limbed comedian as a bumbling would-be James Bond — which arrives seven years after the franchise’s second installment and 15 after the first.

What took so long, you ask?

“I’m someone who finds filmmaking, I suspect like many people in my line of work, incredibly stressful and not enjoyable at all,” Atkinson said. “I enjoy the fruits of the film’s success if they do well, but I don’t enjoy the process. I find it really, really, really hard.”

So hard, in fact, that after a false start that revolved around a Romanian orphan and his evil twin, Atkinson and screenwriter William Davies went back to the drawing board. The result: a “Skyfall” spoof, in which a cyberattack on MI7 compromises the current agents and necessitates that Johnny, now a geography teacher, be brought out of retirement.

But in taking down a digital villain, Johnny opts to go Luddite, shunning a smartphone in favor of old-school gadgetry like exploding Jelly Babies and magnetic boots, all packed in a flirty red Aston Martin V8 Vantage that Atkinson bought for the film himself.

For nearly four decades, Atkinson, 63, has put his signature eyebrows — like quivering Roman arches — to sidesplitting use as a time-traveling Blackadder, a verbally constipated Mr. Bean, a tongue-tangled clergyman in “Four Weddings and a Funeral” and an overzealous gift-wrapper in “Love Actually.” In a phone interview from London, he spoke about the allure of the spy, the power of free speech and why being humorous is often no fun at all.

Q: In its opening weekend in Britain, “Johnny English” came in second to “Venom” in box-office grosses, but beat out a “A Star Is Born.” It looks like Bradley Cooper and Lady Gaga have some competition.

A: Yeah, finally. [Laughs] It’s held up quite well just because the weather is terrible here, so that helps everybody trying to sell tickets to movies.

A: I’ve always thought that Roger Moore is more Johnny English’s inspiration. I think he’s slightly more the raised eyebrow, more ironic, more just having a lot of fun in the world in which he’s found himself. And that is Johnny’s view. He’s quite a self-centered, self-regarding individual. Johnny is not remotely interested in anybody else or their lives. He’s just thinking about the adventure that he’s on and in the end, he just wants to drive the fast cars and wear the sharp suits and go to the exotic locations. And of course garner plaudits if he can.

Q: Emma Thompson, who plays the prime minister in “Johnny English,” has called you a modern-day Charlie Chaplin. How do you see yourself?

A: I don’t think about myself very much in the pantheon of comedy history. But Chaplin was certainly an inspiration. The French comedian Jacques Tati was very important for Mr. Bean. I saw “Monsieur Hulot’s Holiday” when I was 17, and it just had a tone and an attitude and a slowness that I had never seen in a comedy movie before. That idea of expressing yourself entirely visually rather than verbally was inspired by him as much as anything else.

Q: Mr. Bean is staggeringly popular, with more Facebook fans than even Taylor Swift. Any plans to bring him out of retirement?

A: No plans to bring him back. If you look at the 80 million Facebook friends that Mr. Bean has, an awful lot of that is in China and India and Venezuela and Malaysia and Europe and the Far East — and far less general interest in the U.S. We only ever made 13 half-hour TV shows, and 13 shows are not going to get you onto any American terrestrial TV network. But the good thing about the internet is that it’s just a matter of people clicking, and they can see anything and everything that I’ve ever done.

Q: A reviewer in The Guardian asked, “Can’t the British film industry give Rowan Atkinson a role that really does justice to his talent?”

A: It’s an interesting question and I haven’t a clue. I mean, it’s the age-old dilemma of being known for doing a certain thing in a certain way. And even if people think, “Well, we could cast him in this role,” then they say, “He just brings a lot of Mr. Bean baggage with him and would people take it seriously?” I can see myself in some Dickensian role, those sorts of characters. But I think I might have burnt my bridges with the outright silliness of so much of what I’ve done.

Q: In August, you defended Boris Johnson, Britain’s former foreign secretary, after he wrote that women who wear burqas look like “bank robbers” and “letter boxes.” Were you serious?

A: Partly so, partly not. I’m not a supporter of Boris Johnson. I have no interest in him or his political ambitions. [But] I do defend people who make jokes about religion. I was part of a campaign to oppose a Parliamentary bill [the Racial and Religious Hatred Act] in 2006 because I draw a distinction between race and religion, and I think religious practices and beliefs can and should be lampooned. It’s been quite a British tradition for many hundreds of years.