Knightdale, N.C. — Local police departments involved in the planning and logistics for Friday's procession to honor and remember fallen Knightdale police Officer Ryan Hayworth are asking for privacy and patience from the public.

Hayworth, 23, was killed on Interstate 540 early Sunday while responding to a crash.

The public is asked not to attend Hayworth's church or graveside service but is invited to line up along U.S. Highway 64 Business after 2 p.m. to view a 1½-mile procession route between Leith Auto Park, at 5330 Rolesville Road, and N.C. Highway 97, following a service at Elevation Baptist Church.

The procession itself is private, and only first responders, family and friends of Hayworth will be allowed to participate.

The time of the procession will depend on the length of the service, police said, but drivers in the area can expect delays sometime between 2:30 p.m. and 6 p.m. 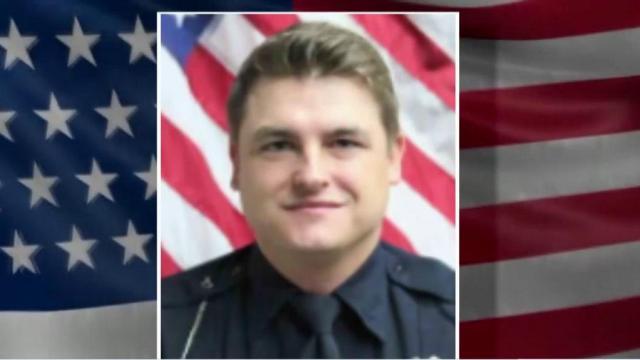 The public is asked to be aware of the arrangements on Friday due to possible traffic slowdowns. Local businesses have been notified, along with the Wake County Public School System. More than a dozen schools will release school early.

Hayworth's private graveside service will result in other road closures, including along Gannon Avenue, which will be closed from Pony Road to Water Plant Road so law enforcement can park there. Cars will also park in the Pineview subdivision and in unused parking lots along Gannon Avenue.

Hayworth's service will be largely attended by family, friends, police and first responders from all over the state and country, according to the Zebulon Police Department, and the public should avoid the area if possible due to parking and traffic concerns.

In a Facebook post, the Zebulon Police Department asked for patience during the 2 p.m. to 6 p.m. block, saying:

"Emergency personnel will be granted access through the route, should it be necessary. Residents along the closure route will have a means of leaving their homes, if necessary, but coming into the area will be restricted. This is necessary for the safety of the first responders working the event and the attendees walking along Gannon Avenue. It is our hope that with three days notice, residents and businesses can adjust their schedules to accommodate this minor inconvenience as we lay to rest a local hero."

'There's a meaning in his death,' father of fallen Knightdale police officer says

Hundreds of people participated in a public candlelight vigil at Knightdale Station Park on Wednesday.

Hayworth had worked for the Knightdale Police Department for only three months. Before coming to Knightdale, Hayworth served as a specialist in the Army National Guard and had served in Kuwait during Operation Enduring Freedom, for which he was awarded the Army Commendation Medal, the National Defense Service Medal and many other honors.

"We’re crying a lot. We’re remembering a lot," Tim Hayworth said. "A week ago today, we were at the [State] Fair. He had a blast, ate everything he could possibly see, rode the Ferris wheel."

The proud father said his son was so excited about his work in Knightdale that he called his father at the end of each shift to tell him what he had done that day.