Ossai had been attacked by the same two dogs two years ago.

Two families involved in the Sunday afternoon attacks on Summerland Drive had to fight the dogs off with broomsticks and knives before the animals ran off and were captured on a nearby trail.

"A dog is not supposed to attack anybody like that, and somebody that has a dog needs to take control of his or her dog," Ossai said Friday. 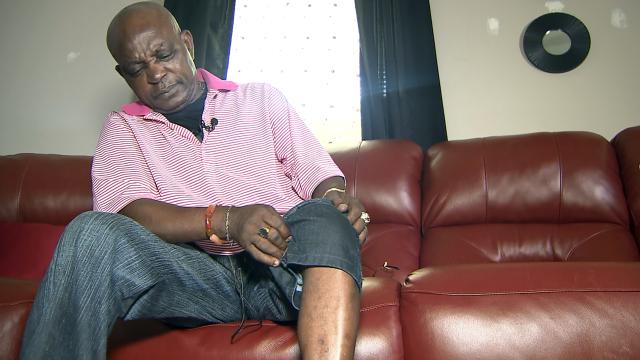 He still has scars on his left leg from where the rottweilers bit him in February 2019 as he sat in his SUV outside his southeast Raleigh home talking on the phone with his wife. The driver's door was open, and his leg was partially outside.

"I was looking down in the car. I saw the dog come and grab my leg, two of them," he said. "They were trying to pull me."

The dogs' owner had tied them to a tree in front of his house, but they broke the tether, Ossai said. The dogs let go of him only after the owner came outside and called them, he said.

Dr. Jennifer Federico, director of Wake County Animal Services, said dogs have to cause specific injuries to be deemed dangerous.

"Even if they’re going to be deemed dangerous, they typically are allowed to be reclaimed," Federico said.

But owners must then follow regulations on their confinement to keep the animals, she said.

"They now have strict liability for that animal, which is a big responsibility for them because they now know their animal is capable of doing that type of damage," she said. "There is a lot of responsibility, even to how you restrain your dog [and] how you house your dog – all of these things – because we don’t want it to happen again."

It happened again with the rottweilers – more than once. They also attacked someone in north Raleigh in early 2019, according to records, before last weekend's attacks.

The dogs' owner, Cyril Alhaj Chesson, 39, has been charged with attack by dangerous dog and violating a local ordinance on animals at large in connection with the latest incident.

"Somebody that owns a dog like that is supposed to know how to handle a dog in midst of his neighbors," Ossai said.

The rottweilers have been in quarantine at the Wake County Animal Center since Sunday, and Federico said they will be put down next week because Chesson doesn't plan to reclaim them this time.

"Everybody has to be responsible. If you own a dog – I don’t care if it’s a large dog, small dog, any dog – you’re responsible for that pet at the end of the day," Federico said. "They’re just being dogs."