Ross goes on the air in US Senate campaign 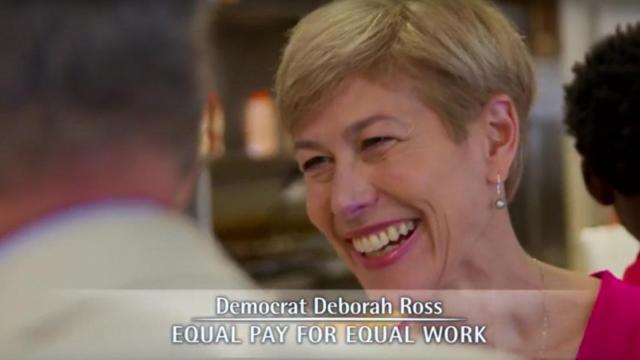 Raleigh, N.C. — Former state Rep. Deborah Ross, D-Wake, is the first of the four Democrats running for U.S. Senate to air a campaign ad on broadcast television this year.

The spot will air "through the primary," according to her campaign. In the Raleigh market, public files maintained by the Federal Communications Commission show her campaign has bought time on both WRAL and WRAZ, which are owned by Capitol Broadcasting Company. Checks of stations in other markets did not reflect other buys on Wednesday night, but public files often lag a behind when a commercial begins to air.

"Who says the game's got to be rigged, that the United States Senate will only speak for the wealthy, the well connected?" the ad begins, featuring a collage of male and female voices. "Who says we can't elect someone who will be our voice? Someone like Deborah – Deborah Ross."

That message co-opts, or at least echoes, lines Ross' opponents, particularly Spring Lake Mayor Chris Rey and Durham businessman Kevin Griffin, have used on the campaign trail. Both men have argued in small forums that they represent "regular" North Carolinians, while Ross has thus far adopted the posture of a seasoned politician and experienced legislator. However, in a year when at least some early-state primary voters have gone for anti-establishment candidates such as U.S. Sen. Bernie Sanders of Vermont for president, the message of "people, not the powerful" may be particularly appealing.

Democrats running to replace Burr offer choice between 'experience,' 'regular guys'
All three, along with the race's fourth candidate, Ernest Reeves, are due to meet in a debate hosted by WRAL News at 7 p.m. Thursday. It will be broadcast live on WRAL and streamed on WRAL.com.

Ross has made the case that she is the only one of the four candidates who has put together the traditional campaign infrastructure needed to take on Republican U.S. Sen. Richard Burr, who has millions in his campaign war chest. Putting a television ad on the air emphasizes that message heading into the debate.

Mail-in absentee votes are already being cast in the March 15 primary, although polling shows nearly half of likely Democratic voters haven't made up their minds in the U.S. Senate campaign. In-person early voting begins next week.

Burr began airing his first ad of the campaign earlier this month. He faces a primary challenge, notably from Dr. Greg Brannon, a Cary obstetrician who ran unsuccessfully for Senate in 2014, but most public polling shows him with a wide lead.