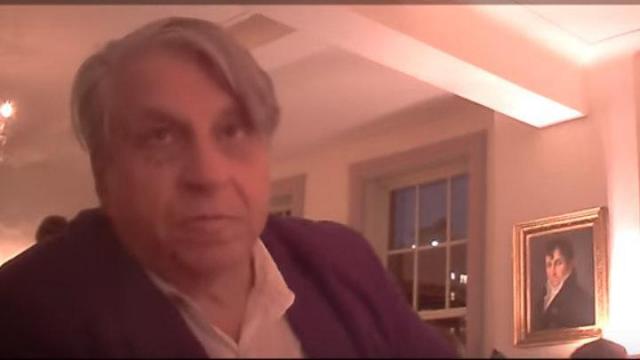 Ross is a Democrat running against Republican Sen. Richard Burr in what polls suggest to be a tight race.

The video was produced by Project Veritas, a group headed by James O'Keefe, who has served as a provocateur targeting Democratic candidates and liberal causes over the past decade. He is best known for videos that called into question the practices of the activist group ACORN.

Approximately 40 to 50 people attended the September fundraising event organized by donors to the Ross campaign. One of those who attended was Benjamin Barber, a retired professor and political speaker who has donated to a number of Democratic campaigns and causes. Since 2008, Federal Election Commission records show him donating $12,825 in amounts of $1,000 or less. That does not include the $200 he contributed to attend the Ross fundraiser.

In video posted by Project Veritas, a person wearing a hidden camera has engaged Barber in conversation. Project Veritas does not provide the whole conversation, but Barber does make comments comparing African-Americans who back Republican candidates to Jews who aided Nazis in the concentration camps, using the term sonderkommandos.

"So, blacks who are helping the other side are seriously (messed up) in the head. They're only helping the enemy who will destroy them. Maybe they think, 'If I help them, we'll get along OK. Somehow, I'll save my race by working with the murderers,'" Barber said during the fundraiser, whose direct quote uses a vulgarity rather than the words "messed up."

The Ross campaign suggested that Republicans were trying to distract from remarks made by Burr during a recent visit to a gun shop. A spokesman also said that Ross does not agree with or condone Barber's remarks.

"The campaign will donate the $200 we received from Mr. Barber to the North Carolina disaster relief fund to help those affected by Hurricane Matthew," said Cole Leiter, a Ross campaign spokesman.

During a Raleigh news conference Wednesday, O'Keefe would not say whether his operative paid to attend the event or was there in some other capacity.

"We did nothing illegal," he said.

O'Keefe did not provide any evidence that Ross had heard the remark when it was made, saying only that she was "in the room."

The video includes a clip of Ross herself, but she doesn't make any remarks outside mainstream Democratic talking points about the ills of North Carolina's voter ID law, apparently unrelated to the remarks Barber made.

Speaking by phone to WRAL News on Wednesday, Barber said that Ross was nowhere nearby when he made the remarks and not involved in the conversation. He described the exchange as "heated" and focused on GOP presidential candidate Donald Trump. And the person to whom he was speaking was "baiting me and pushing me," Barber said.

While Barber condemned Project Veritas and its tactics, he said the analogy to sonderkommandos "was an overstatement and not one that I would make in public."

He added, "I stand by the basic view that people of color – Latinos and African-Americans and others – who are voting for Trump are voting in total disregard of their own long-range interests and in total obliviousness to everything that Trump has said about Latinos, about immigrants, about African-Americans, his own racist record."