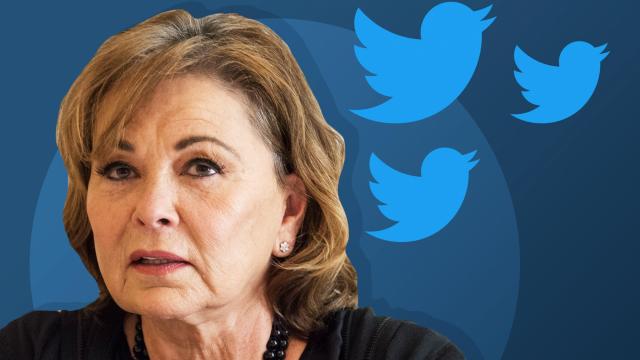 NEW YORK (CNNMoney) — For 24 hours after ABC's decisive stamping of "THE END" on her briefly glorious comeback story, Roseanne Barr flailed her way on Twitter through a range of excuses and explanations for the comments that led to her show's termination. She blamed in tweets or retweets backlash against her conservative views, side effects from the drug Ambien, and even a mind-bending conspiracy by ABC to bring her show back just so it could then be canceled. At some points, she even took responsibility for her own stupidity.

Surprisingly, so far at least, she did not blame Twitter for existing. And so she may be missing the most likely culprit -- beyond the one she sees in the mirror every day of her life.

Not that Twitter made her spew ugly racist comments about a prominent black American. Or repeat anti-Semitic calumnies against a man because he happens to be a major donor to Democrats. Or support a range of preposterous but poisonous and dangerous conspiracy theories about child molestation, and more.

But the world surely got to know about all of these because she chose to unleash her opinions in public on Twitter. Roseanne has been making toxic comments for a long time on social media. ABC, in the throes of the reboot fever that has infected all of network television in its declining years, chose to overlook that fact, or at least gloss over it, when it decided to bring back her one-time smash hit show.

Various ABC executives made comments along the lines of "it's just Roseanne being Roseanne" to try to move on past the noxious fumes from her Twitter rants. The ratings were unexpectedly fabulous. Success (and money) tend to encourage obliviousness.

To their credit, ABC and Disney executives found, in reaction to Roseanne's latest and most egregious offenses, the proper moral bearings to subdue their financial imperatives. And not too many (as in hardly any) corporations step up this way even when moral revulsion demands it. So, yes, credit to them.

But would we be here if Roseanne kept these views to herself? Throughout her career, she has been a volatile, mercurial talent, almost impossible to restrain. When her show was at its heights in the 80's and 90's, she regularly laid waste to the production and writing staffs, and repeatedly clashed with the network.

She once called me at The New York Times totally out of the blue, in a fury with ABC and its then-boss Bob Iger (who, of course, as head of Disney made the ultimate call to open the trap door on her this time) over some perceived slight to her then husband Tom Arnold. She accused Iger of sexism, of lying to her, and of using language demeaning to women in defending the network's position.

Many of her wildest and most lurid comments about ABC and Iger were off the record, as I recall. So, of course, those did not become public. If she had had a Twitter account in those days, I imagine she would not have felt compelled to call the Times to make her case. She would likely have just put all her comments out there for the world to read.

There were dozens of other episodes with Roseanne in those days. She once bragged about threatening a producer with a pair of scissors over wardrobe decisions for her character:

"I walked into this woman's office, held the scissors up to show her I meant business, and said, "Bitch, do you want me to cut you?" We stood there for a second or two, just so I could make sure she was receptive to my POV. . . I will win this battle if I have to kill every last white bitch in high heels around here."

Extreme behavior has worked for mega-stars throughout the history of Hollywood, but extreme views are, for the most part, anathema. Ask Michael Richards. The "Seinfeld" star made ill-advised, spontaneous racial comments looking for laughs in a stand-up routine. It basically cost him his career.

Disney had previously suspended its ESPN anchor Jemele Hill for a couple of social media posts, one calling Donald Trump a white supremacist, another criticizing Dallas Cowboy owner Jerry Jones of for threatening to bench players if they knelt during the National Anthem.

Fox News fired a commentator for called John McCain "Songbird John" and suggesting torture had "worked" on him. Those views were deemed too extreme for television.

Roseanne's tweets surpassed all of those examples by acres of offensive territory. And the world knew about it because the comments came straight from her own fingers on a keyboard.

Of course, beyond that is the question of how many of her unhinged views derived from her own tip-toeing through the fetid tulips of social media. She displayed a penchant for re-tweeting grotesquely ugly opinions and supporting some of the darkest theories from the farthest reaches of the lunatic fringe.

Those did not get her fired. Nor did her support of Donald Trump.

What led to this demise was indeed Roseanne being Roseanne: vividly, not on her TV show but on her Twitter feed.