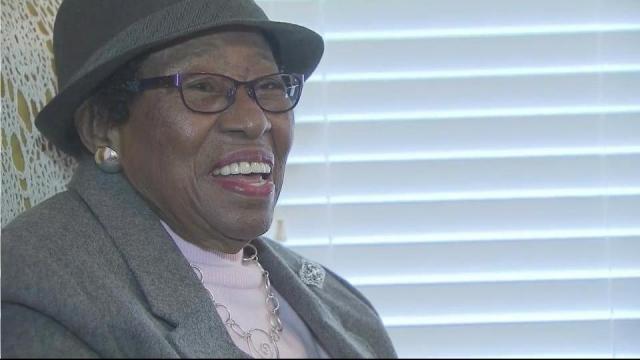 EDITOR'S NOTE: Robert D. McFadden is a senior writer on the Obituaries desk of The New York Times and the winner of the 1996 Pulitzer Prize for spot news reporting. He has covered many of New York’s major news stories in his more than 30 years as a reporter and rewrite man for the paper, and has earned a reputation as one of the finest rewrite men in the business.

Rosanell Eaton, a resolute African-American woman who was hailed by President Barack Obama as a beacon of civil rights for her role as a lead plaintiff in a lawsuit against a restrictive North Carolina voting law that reached the Supreme Court in 2016, died Saturday in Louisburg. She was 97.

Eaton’s daughter, Armenta Eaton, said she died in hospice care at the home they had shared in recent years.

Caught up as a witness to history in one of the nation’s major controversies, Eaton, an obscure civil rights pioneer in her younger years, became a cause celebre after Obama cited her courage in his response to a 2015 article in The New York Times Magazine about growing efforts to dismantle the protections of the Voting Rights Act of 1965.

“I was inspired to read about unsung American heroes like Rosanell Eaton in Jim Rutenberg’s ‘A Dream Undone: Inside the 50-year campaign to roll back the Voting Rights Act,'” Obama wrote in a letter to the editor. “I am where I am today only because men and women like Rosanell Eaton refused to accept anything less than a full measure of equality.”

A year after the president’s letter, the Supreme Court, in a 4-4 vote, let stand a federal appeals court judgment upholding the lawsuit spearheaded by Eaton and other plaintiffs. The ruling struck down a North Carolina statute whose provisions “target African-Americans with almost surgical precision” in what the court called an effort to depress black turnout at the polls.

In 2017, after regaining its conservative majority with the appointment of Justice Neil Gorsuch, the Supreme Court refused to hear an appeal to revive the case, effectively overturning a far-reaching effort by Republicans to counter what they contended, without evidence, was widespread voter fraud in North Carolina.

A lifelong devotee of voting rights who vividly remembered the terrors and degradations of the Jim Crow era, Eaton, one of seven children of a North Carolina farm family, attended segregated schools, used segregated bathrooms and other public accommodations and drank from a “colored” water fountain in her hometown, Louisburg.

In her first act of defiance, when she was 21, she went to the Franklin County Courthouse in Louisburg. Three white men confronted her there and demanded to know what she wanted.

“I’m here to register to vote,” she said.

They told her that she could register only if she could recite from memory the Preamble to the Constitution of the United States. It was a common ruse, disguised as a literacy test, to turn away black voters. The valedictorian of her high school class, she complied without hesitation.  “We the People of the United States,” she said, “in Order to form a more perfect Union, establish Justice, insure domestic Tranquility, provide for the common defense, promote the general Welfare and secure the Blessings of Liberty to ourselves and our Posterity, do ordain and establish this Constitution for the United States of America.”

She registered and cast her ballot that year, 1942, becoming one of the state’s first black voters since Reconstruction. She voted in nearly every election thereafter. For more than 40 years, she was a county poll worker on election days, and a special registrar commissioner, helping some 4,000 people to register to vote.

In 1950, she joined the National Association for the Advancement of Colored People, and for more than 60 years participated in protests against racial discrimination, including the 1963 March on Washington for Jobs and Freedom.

During the civil rights turmoil of the 1960s, she and her family were threatened repeatedly by night riders, according to federal court papers. She awoke several times to the crackle of burning crosses outside her home. Farm equipment was damaged one night, and bullets were fired into a shed and into the farmhouse.  One struck just below her bedroom window.

North Carolina’s effort, a half-century later, to impose restrictive changes on voting laws prompted Eaton to join a peaceful protest outside the Legislature in Raleigh in 2013. As she moved slowly with a walker, her friend, the Rev. Dr. William J. Barber II, then president of the North Carolina NAACP, told her: “Rosanell, you don’t have to do this.”

“I know what I have to do,” she said. The Rev. Dr. T. Anthony Spearman, who succeeded Barber last year as president of the North Carolina NAACP, said Sunday that Eaton had been an inspiration to generations of African-Americans in North Carolina.

“Mother Rosanell Eaton was a warrior for justice who gave the most for her people in an utterly selfless way,” Spearman told The Times. “She was wise to a fault, and extremely sensitive to the vitriolic climate of our times. She rose up to champion voting rights and her people.”

She was born Rosanell Johnson on April 14, 1921, in her family’s farmhouse 7 miles from Louisburg, the youngest child of Edmund Johnson and the former Mamie Eaton. The Johnsons raised tobacco and cotton on 20 acres, which they owned. Rosanell’s father died when she was 2. Her siblings, and Rosanell when she was old enough, helped her mother work the farm.

Rosanell attended the New Liberty School, a two-room schoolhouse, for elementary grades. She walked 8 miles round-trip to attend the Albion Academy, a high school in Franklinton, where she graduated at the top of her class in 1939.

In 1941, she married Golden Eaton, a farmer (who was not related to her mother’s family). They had four children: Annie, James, Armenta and Jesse. Golden Eaton died in 1963. In addition to her daughter Armenta, she is survived by four grandchildren and nine great-grandchildren.

After her husband’s death, Eaton worked as a machine-parts packer, attended Vance Granville Community College in Henderson for two years and North Carolina State University for a year.  She was a teacher’s assistant in Youngsville until retiring in 1991.

At Barber’s request, Rosanell and Armenta Eaton became lead plaintiffs in the lawsuit against a new North Carolina law that civil rights advocates called the most serious challenge in decades to the Voting Rights Act of 1965, which had prohibited a vast array of devices once used to disenfranchise minorities. In 2013, the Supreme Court nullified a key provision of the act that required localities with a history of discrimination to get federal approval for any voting-law changes. North Carolina quickly adopted dozens of changes in a new law requiring voters to show a photo identification, like a driver’s license or passport, and it rejected forms of identification used disproportionately by black people, including IDs issued to government employees, students and people receiving public assistance.  The law also cut back early voting, preregistration and other measures to protect the right to vote.

Defenders said the changes were intended to prevent voting fraud, but opponents said they were onerous and harmed minorities disproportionately.

The Justice Department and civil rights groups filed suit against the state law, and the Eatons agreed to be lead plaintiffs. Over three years, they spent a total of eight weeks attending hearings and testifying at federal courts in Greensboro and Winston-Salem.

Armenta Eaton, in an interview for this obituary, said her mother had eagerly testified about the racial discrimination in her lifetime, including the many attempts to intimidate her. “She feels so strongly about it,” Eaton said. “She’s not afraid of anything.  She couldn’t wait to get there.” The case was effectively concluded in 2016. The lower court upheld the voting changes, saying the state had not acted with discriminatory intent, and that “significant, shameful past discrimination” had abated.  But the appeals court disagreed.  “We cannot ignore the record evidence that, because of race, the legislature enacted one of the largest restrictions of the franchise in modern North Carolina history,” it said, striking down the statute.

“Rosanell is now 94 years old,” Obama said in his encomium. “She has not given up. She’s still marching.  She’s still fighting to make real the promise of America.  She still believes that We the People have the awesome power to make our union more perfect.”