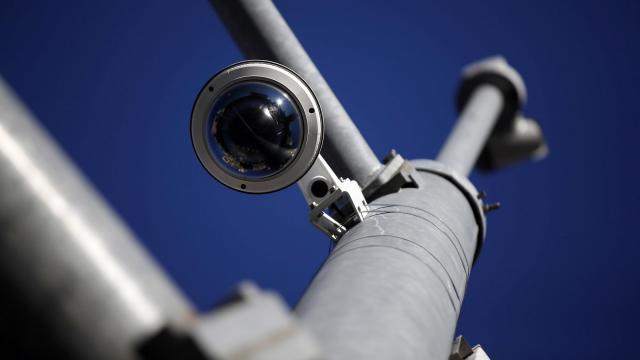 LAS VEGAS — With their rifles at the ready for an active shooter, Sgt. Charles Jivapong and half a dozen other police officers moved quickly through an industrial building not far from the airport here, trying to determine which victims were alive and which were too far gone to be saved.

This time, it was a drill. But Jivapong remembers when it was real: Less than three months ago he responded to reports of gunfire aimed at thousands of people at a country music concert. In just a few days, Jivapong would be out with his officers once again, this time with more than 300,000 revelers celebrating the start of 2018.

“It’s not really a matter of if it happens again, more like when,” he said. “Something like that really changes your perspective and mindset. It weighs heavily. I find myself scanning overhead all the time, thinking about what will happen if we have to do it all over.”

Las Vegas is preparing for its first New Year’s Eve since the Oct. 1 shooting, when Stephen Paddock shot hundreds of rounds from the 32nd floor of the Mandalay Bay Resort and Casino, killing more than 50 people and wounding hundreds of others. For decades, Dec. 31 has been the biggest night of the year in Las Vegas, drawing tourists from all over the world who come to party with abandon on the Strip.

Security has always been a concern; officials say they begin preparing for the next year on Jan. 2. But this year, the preparations have taken on a more somber and urgent tone. In trainings and drills, officers are being urged to consider the possibility of shootings from elevated positions. They are coordinating with medical personnel from the fire department, forming teams who will be ready to respond on the Strip and downtown if there is any kind of mass attack.

Homeland Security officials have classified the night as a top safety priority, sending snipers who will be poised on hotel rooftops, helicopters with tactical security forces, and a hostage rescue team from the Federal Bureau of Investigation. National Guard officers will also be stationed throughout the area, including at the nearby airport.

For years, the Las Vegas Metropolitan Police Department had lobbied federal officials to give New Year’s Eve the Department of Homeland Security’s top special event assessment rating, which would provide the city with federal officers and resources like intelligence and helicopter teams. A few weeks after the October shooting, the Police Department got word that they would receive the rating for the first time this year.

“We need to be able to focus on multiple shooters, on one or more above ground — we’ve got to multiply our forces,” said Chief Chris Jones, who is overseeing the department’s preparations. Jones said he could not give specific details of precisely how officers would be deployed, but estimated that there would be more than 5,000 local and federal officers along the Strip. Nearly the entire length — roughly 4 miles — will be closed to traffic.

About 330,000 visitors are expected on the Strip for New Year’s Eve, according to the Las Vegas Convention and Visitors Authority, which puts on a fireworks show from seven rooftops and is billing the event as “America’s Party.” The number is down slightly from last year, though officials said it could still rise.

While there was a slight dip in tourism just after the shooting, Cathy Tull, senior vice president of marketing, said that conversations with focus groups showed that the hesitancy to visit was not because of safety fears.

“They were trying to figure out what was appropriate, when they could come and have a good time,” she said. “We’re talking about people who drive, who can decide on Thursday to come on Friday and are very comfortable here. They were just waiting. Now they want their Vegas back.”

In the days after the shooting, the tourism authority pulled advertisements proclaiming “What happens here stays here,” replacing them with commercials that used Vegas Strong, a motto and hashtag that is now emblazoned on T-shirts and billboards all over the city. The “What happens here” spots will begin airing again next month.

The Las Vegas shooting has prompted the New York Police Department to reassess its New Year’s preparations as well, with the city, and Times Square in particular, long considered likely targets.

Each New Year’s Eve, the New York Police Department, and its counterparts in state and federal law enforcement, face anew the job of securing the highly symbolic spot where the ball drops to the clamor of up to 1 million spectators packed together.

The Vegas attack has prompted the department to re-examine their plans. “We’re saying, ‘Let’s revisit our high-vantage security during events like this,'” said Stephen P. Davis, the Police Department’s chief spokesman.

The department plans to use its rooftop observation teams and counter-snipers across a more vast area of real estate than in past years. Those teams are also more vigorously preparing for New Year’s Eve, scouring the hotels, office buildings and residential high-rises around Seventh Avenue and Broadway, from the West 40s through the West 50s, to familiarize themselves. Like the officers in New York, Las Vegas police have a dual focus: trying to prevent an attack and quickly stopping it if one does happen. Every officer in the department will work a shift between New Year’s Eve and New Year’s Day, Jones said. Inside Police Headquarters, officials will closely monitor the city using hundreds of security cameras placed in the heavily trafficked tourist areas.

The department will also coordinate with casinos, all of which have their own security teams. Several resorts impose special rules on New Year’s Eve, such as allowing only hotel guests into the property as midnight nears. As MGM Resorts International faces several lawsuits claiming the Mandalay Bay is liable for the Oct. 1 shooting, many hotels have begun to reassess and revamp their own security plans and procedures.

Jeffrey S. Muller, a former FBI agent who now runs a security consulting firm, said several resorts have hired him in recent months to spot their weaknesses and help them address any vulnerabilities.

“There’s a willingness to do something now that wasn’t always there before,” Muller said. “The casinos acknowledge there’s more they can and should do because there really are many targets that can be attacked at once.” After years of planning, officials here recently began installing steel bollards along the strip to prevent drivers from mowing down pedestrians with their cars, as one woman did two years ago.

“I’m just as afraid of people who get drunk or high as I am of terrorists or mass shooters,” said Carl Davis, 28, who had come from Santa Clarita, California, to celebrate before Christmas. As he stood in front of the bollards near the Bellagio, he held a frozen margarita in his hand and grinned. “If you start letting yourself be too afraid to go somewhere because it might happen again, you’ll never leave your house. This is where we come to have fun, not be scared.”