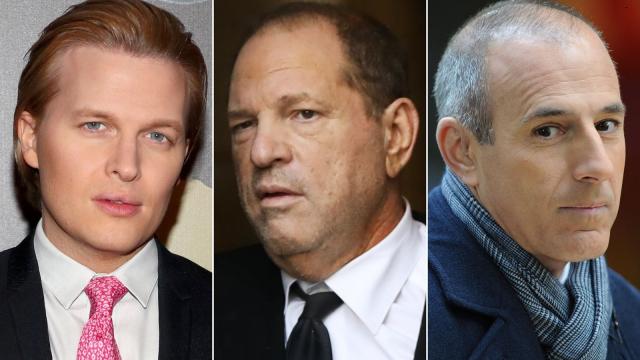 CNN — For two years, it's been a network news mystery: Why did NBC table Ronan Farrow's investigation into Harvey Weinstein in 2017? Why did the network let him walk it over to The New Yorker, where he eventually won a Pulitzer Prize for the reporting, instead of airing it on TV?

NBC executives say Farrow simply didn't have enough on-the-record, on-camera reporting to broadcast. The executives say they supported Farrow for months, but his draft script wasn't up to NBC standards, and they didn't want to stand in his way when he saw an opportunity to get the story published in print.

Farrow doesn't buy it. Neither does his former producer Rich McHugh. They have their suspicions about what happened, and now Farrow is sharing it all publicly in a book called "Catch and Kill."

CNN Business obtained an advance copy of the book, which comes out next week. In it, Farrow describes "odd signals" from NBC executives and suggests that the network's own secrets weighed on the network's judgments. One of the network's biggest stars, Matt Lauer, was having sexual relationships with co-workers, and Weinstein knew it, according to anonymous sources he cites in the book.

"NBC denied any threat was communicated" by Weinstein or American Media Inc, the publisher of the National Enquirer, Farrow wrote. He doesn't seem to have any proof of an explicit deal between Weinstein and NBC management. But he has many reasons to be suspicious.

NBC News chairman Andy Lack pushed back on Farrow's interpretation of events in a Wednesday afternoon memo to staffers. He said Farrow's book "uses a variety of tactics to paint a fundamentally untrue picture" about NBC's handling of the Weinstein probe.

A representative for Farrow responded, "the claims by NBC's senior management about Ronan Farrow's reporting are simply not true, as his book will methodically demonstrate."

In the book, Farrow says "there was no doubt that the allegations against Lauer, and NBC's wider use of nondisclosure agreements with women who experienced harassment, were under threat of exposure during our reporting. That precarious culture of secrecy made NBC more vulnerable to Harvey Weinstein's intimidation and enticement, delivered through lawyers, and intermediaries, and calls to" multiple executives up and down the corporate chain of command.

NBC has previously acknowledged that Weinstein badgered NBC executives and pursued all sorts of avenues to shut down Farrow's investigation. The network says it resisted all of the pressure.

"The story presented by Mr. Farrow, while dramatic, is inaccurate," an AMI spokesperson told CNN Business.

NBC News said in a statement that the news division "was never contacted by AMI, or made aware in any way of any threats from them, or from anyone else, for that matter. And the idea of NBC News taking a threat seriously from a tabloid company about Matt Lauer is especially preposterous, since they already covered him with great regularity."

He said, he said

The timeline of Farrow's reporting stretches back to the start of 2017, when Farrow was working on multiple investigative projects for NBC, to be shown on Lauer's "Today" show and other network newscasts.

He was interested in stories about sexual harassment in Hollywood, and NBC News president Noah Oppenheim suggested he contact the actress Rose McGowan, who had been tweeting about her encounter with an unnamed movie mogul.

Before long Farrow was hearing about Weinstein and decades' worth of alleged abuse. But it proved to be very difficult to convince anyone to speak on camera on the record. This was a testament, Farrow writes, to the fear that Weinstein instilled in his employees: Multiple sources wanted to be interviewed in shadow, disguising their identities from the television audience.

McGowan was an exception: She spoke on the record, on camera, in chilling fashion. But she did not explicitly name Weinstein as her attacker.

Later, she hesitated about letting Farrow air her comments at all. According to Farrow, she grew "uncomfortable with the delays" and concerned about "things she'd heard about the people there" at NBC. Eventually Weinstein's lawyers pushed to enforce her nondisclosure agreement and sent a cease-and-desist demand to NBC.

At the heart of the matter is a fascinating series of arguments about what is publishable, when, and in what form. And both Farrow and NBC have compelling cases to make.

What Farrow interpreted as slow-walking his explosive scoop, NBC executives cast as an act of journalistic responsibility.

What Farrow describes as a lack of enthusiasm about his reporting, others describe as appropriate skepticism.

So was what happened with Farrow and NBC just the natural push and pull between reporter and editor, between employee and supervisor?

Or was NBC News trying to cover up Weinstein's conduct? Was NBC's parent company, Comcast, trying to protect relationships in Hollywood?

Farrow strongly hints at these latter possibilities. He notes that Weinstein had relationships right up to the top of Comcast, where CEO Brian Roberts had known the media mogul for years.

But he doesn't have smoking gun evidence of a quid pro quo — something to the effect of Weinstein saying "back off of me, or I'll expose Lauer."

And Farrow says that Roberts later apologized to him for NBC's handling of his investigation.

Throughout "Catch and Kill," Farrow brings up his workplace interactions with Lauer, reminding readers that Lauer would be fired for sexual misconduct less than two months after the Weinstein investigations came out.

Farrow has new interviews with several of Lauer's accusers, including the first on-the-record interview with Brooke Nevils, who alleges that Lauer raped her during a 2014 work trip in Russia. Lauer categorically denied her claims in an open letter on Wednesday.

Farrow points the finger at what he calls a "network news culture that made women feel uncomfortable and unsafe, and left little room for accountability around its larger-than-life stars."

And he questions NBC's own use of contracts to keep alleged wrongdoing a secret, given that he was trying to reveal Weinstein's use of the same types of contracts.

In the book, Farrow quotes at length from his interactions with Oppenheim and others at NBC. At times, Farrow says, Oppenheim was very interested in the progress he was making; at other times, he writes, Oppenheim seemed indifferent.

"I still don't think Harvey Weinstein's a name the 'Today' show audience knows," he quotes Oppenheim saying after he turned in a lengthy draft script in July. "And anyway," Oppenheim is quoted saying, "where would we even air it? This looks long."

Farrow was getting more and more concerned about getting scooped by The Times. But he says NBC executives didn't share his sense of urgency.

He quotes Rich Greenberg, the executive editor of the NBC News investigative unit, telling him that "sometimes it's best to let someone else go first."

Farrow grew frustrated as the reporting was held up by a legal review process. Such a review is standard practice in the news business, particularly when a litigious figure like Weinstein is involved.

Again, it all comes down to interpretation — was NBC supporting Farrow by making sure the story was buttoned up, or was his reporting being shelved?

When NBCUniversal's general counsel Kim Harris undertook her own review of the reporting, Oppenheim told Farrow that Harris would "tell us what we can really be bulletproof in saying, what can hold up in court," according to Farrow.

But in the meantime, Farrow was told to "pause" his efforts to gain additional corroboration, including a new interview with McGowan.

By mid-August, network executives had determined that Farrow did not have enough evidence against Weinstein to merit a story. "Right now, we can't run this," Oppenheim told him.

Farrow also quotes Oppenheim telling him "you're too close to this," meaning, too emotionally invested in the accusers' accounts.

He gave Farrow a green light to take the reporting to a magazine, bringing up New York magazine as a potential example and essentially telling him to take the story elsewhere.

Farrow took it to the The New Yorker magazine, where editor David Remnick was immediately interested in what he had.

When the magazine published Farrow's reporting, and people asked why Farrow hadn't broadcast it on NBC, Oppenheim told staffers, "we didn't feel that we had all the elements that we needed to air it."

"We supported him and gave him resources to report that story over many, many months," Oppenheim said at the time. "The notion that we would try to cover for a powerful person is deeply offensive to all of us."

That's been the consistent explanation from NBC ever since.

McHugh, who left NBC last year, has stood firmly in Farrow's corner, pointing out that the network had "an exclusive audio recording of Harvey Weinstein admitting to sexual assault," among other evidence.

This tape was of a 2015 NYPD sting operation, when model Ambra Gutierrez recorded Weinstein pleading with her to come up to his hotel room and she was heard resisting him. At one point, Gutierrez asked him, "Why did you touch my breast?" Weinstein responded by saying sorry and "I'm used to that." A moment later, he added, "I won't do it again."

The tape was handed over to the District Attorney in Manhattan at the time, but the D.A. office determined it was insufficient to prove a crime had occurred, a decision that remains deeply controversial.

According to Farrow, Oppenheim commented that the existence of the tape was not national news. NBC News has come under fire from media critics for sitting on the tape for months and not airing it; in response, the network has pointed out that The New Yorker later possessed the tape for nearly two months a month before publishing it.

Ultimately the tape was a key piece of the fact pattern laid out in Farrow's story for The New Yorker.

According to NBC, his ultimate story for the magazine "bore little resemblance to the reporting he had while at NBC News." In other words, Farrow was able to find new sources and evidence after he left NBC.

But Farrow asserts that he had an eminently reportable story, ready to go, and that NBC quashed it.

"NBC killed the Weinstein story," Farrow's partner Jon Lovett tweeted on Wednesday. "It was a historic mistake. Over and over and over again, NBC told Ronan to stop reporting. I heard it myself! Phones have speakers!"

But in Wednesday's memo, Lack stood by the August 2017 decision.

"Here are the essential and indisputable facts: NBC News assigned the Harvey Weinstein story to Ronan, we completely supported it over many months with resources -- both financial and editorial," Lack wrote. "After seven months, without one victim or witness on the record, he simply didn't have a story that met our standard for broadcast nor that of any major news organization. Not willing to accept that standard and not wanting to get beaten by the New York Times, he asked to take his story to an outlet he claimed was ready to publish right away. Reluctantly, we allowed him to go ahead."

Farrow's representative responded by saying that "relevant sections of the book confirm not only how many women were named, but also how much proof Ronan had gathered. Importantly, it documents the lengths to which NBC executives went to thwart the reporting efforts of Ronan and his producer Rich McHugh and why they did so."

Lack's memo also defended the news division by noting its other investigations "into sexual harassment and abuse on many stories -- many pre-dating Weinstein -- including USA Gymnastics, Silicon Valley, Bill Cosby, Jeffrey Epstein, and more."

To get across the finish line on big stories like these takes exceptional work, collaboration, patience, and a commitment to a set of standards and practices that ultimately lends our work great credibility," Lack wrote. "If you have any questions about the journalistic decisions that were made, please don't hesitate to ask."