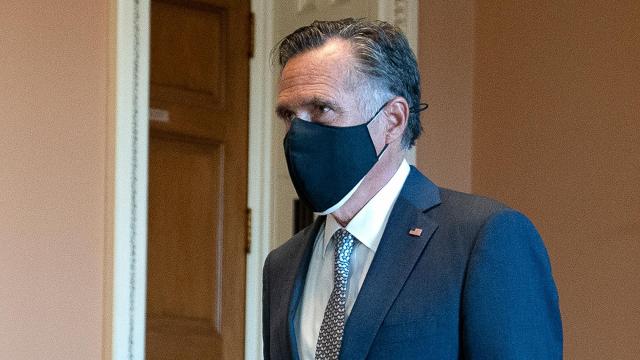 CNN — Republican Sen. Mitt Romney on Sunday called for the country to "get behind" President-elect Joe Biden and said he has seen no evidence of widespread voter fraud, even as President Donald Trump has pushed for election-related lawsuits and refused to concede the election.

While CNN and other networks projected Saturday that Biden will become the 46th President of the United States and Kamala Harris will become vice president, Trump has pushed his attorneys to pursue legal challenges that would delay formal certification of the results. And as his path to reelection narrowed, the President pushed baseless claims of voter fraud -- claims Romney cast doubt on Sunday.

"I do believe, however, that it's destructive to the cause of democracy to suggest widespread fraud or corruption. There's just no evidence of that at this stage. And I think it's important for us to recognize that the world is watching," Romney said.

"I think in a setting like this it's important to think about what the world is seeing, what history will see, it's important, I believe, for us to stand up and defend the institutions of democracy," he said.

The Utah senator also said Sunday that Americans shouldn't "expect (Trump) to go quietly in the night," saying he "would prefer to see the world watching a more graceful departure, but that is just not in the nature of the man."

CNN previously reported that White House chief of staff Mark Meadows discussed next steps with the Trump legal team Saturday, but, according to two sources, Jared Kushner, Trump's son-in-law and senior adviser, has approached the President about conceding the election.

Another source familiar with the conversations told CNN on Sunday that first lady Melania Trump has also joined the growing chorus of Trump's inner circle advising him that the time has come for him to accept the loss.

Romney had said last month that he did not vote for Trump in the election, but he declined to say Sunday who he voted for. Pressed by Tapper, the senator instead said his vote is "in the rearview mirror."

"I'm going to talk now about how I can work with the new president. I know he's on the other side of the aisle, but I want to make sure we conservatives keep on fighting" against Democratic policy proposals, he said.

Romney also said Senate Republicans "have no choice" but to work with Biden on policy, saying the party has "a responsibility we are going to have to live up to."

"We begin, I think, with immediate need to get relief to families and small businesses that are suffering as a result of the economic downturn associated with Covid," he said. "That is something we are going to have to do and we are going to have do it in a bipartisan basis."

The senator went on to say he believes Republicans and Democrats will be able to work together on other issues, including education, health care and the environment.

Romney on Saturday quickly extended his congratulations to Biden and Harris, saying he knows them as "people of good will and admirable character."

While Romney has been a reliable GOP vote, he is often the lone Republican voice on Capitol Hill critical of Trump's rhetoric and character. He was the only Republican to vote to remove Trump from office on a charge of abuse of power during the President's impeachment trial earlier this year.

This story has been updated with additional comments from Sen. Mitt Romney on "State of the Union."