Roger Stone Sold Himself as a WikiLeaks Pipeline to Trump’s Campaign. Was He? 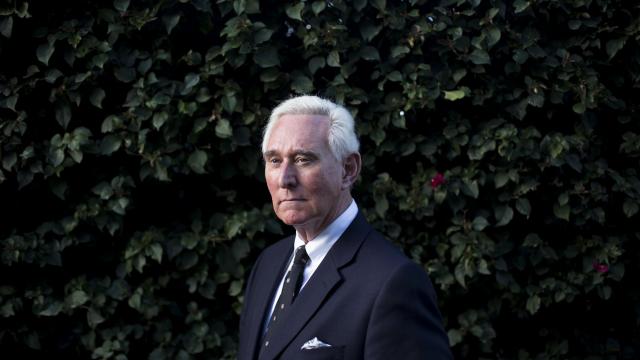 WASHINGTON — When WikiLeaks founder Julian Assange appeared on a video link from Europe a month before the 2016 presidential election and vaguely promised to release a flood of purloined documents related to the race, the head of Donald Trump’s campaign, Steve Bannon, was interested.

He emailed political operative Roger Stone, who had been trying to reach him for days about what Assange might have in store. “What was that this morning???” Bannon asked on Oct. 4.

“A load every week going forward,” Stone replied, echoing Assange’s public vow to publish documents on a weekly basis until the Nov. 8 election.

The email exchange, not previously reported, underscores how Stone presented himself to Trump campaign officials: as a conduit of inside information from WikiLeaks, Russia’s chosen repository for documents hacked from Democratic computers.

Bannon and two other former senior campaign officials have detailed to prosecutors for the special counsel, Robert Mueller, how Stone created that impression, according to people familiar with their accounts. One of them told investigators that Stone not only seemed to predict WikiLeaks’ actions, but that he also took credit afterward for the timing of its disclosures that damaged Hillary Clinton’s candidacy.

But at the same time, the top tier of Trump’s campaign was deeply skeptical of Stone, who has made a career of merging fact and fiction and seems to prize attention over credibility.

Whether Stone was, in fact, a trusted intermediary to WikiLeaks — or simply a master of puffery that made him appear so — remains a paramount question for Mueller’s investigators, who are examining Russia’s interference in the 2016 presidential race and whether any Trump associates conspired with Moscow’s effort.

To tease out the truth, prosecutors have summoned Stone’s former employees and longtime political allies to testify before a federal grand jury in Washington or be interviewed at the special counsel’s office. Investigators asked them about a range of issues, including Stone’s relationship with WikiLeaks, his attempts during the presidential race to raise money for his political causes and whether he tried to persuade one associate not to cooperate with the inquiry.

Stone has repeatedly said that he had access only to Assange’s public statements and to secondhand information from journalists or other sources. If he implied that he had more direct sources, he has said, he was simply engaging in political hyperbole.

In an interview Wednesday, Stone insisted he did nothing more than “posture, bluff, hype,” based on WikiLeaks’ Twitter feed and miscellaneous tips.

“I didn’t need any inside knowledge to do that. They keep looking for some direct communication with WikiLeaks that doesn’t exist,” he said of journalists reporting on the Russia investigation. He added that he had paid for two polygraph tests that prove he is telling the truth.

This article is based on interviews with people familiar with the Russia investigation and the inner workings of the Trump campaign, as well as a review of hundreds of text messages and emails that Stone exchanged over months with several associates, including Randy Credico, a New York comedian, former radio host and left-wing activist whom Stone has repeatedly identified as his source about WikiLeaks.

Besides the confusion caused by Stone’s penchant for innuendo and outright lies, investigators are hampered by the fact that Assange remains out of reach, holed up in the Ecuadorean Embassy in London, where he has lived for six years in fear of extradition to face possible criminal charges.

Still, Bannon’s October 2016 email correspondence shows that the perception that Stone knew what WikiLeaks had in store for Clinton spread to the highest levels of the Trump campaign. No evidence has emerged that Trump or his advisers alerted authorities.

As the month began, Stone peppered Twitter with predictions of an October surprise from Assange, whipping up speculation in the U.S. news media and beyond. Assange, too, had been hinting at coming bombshells.

A half-hour later, Boyle emailed Bannon, urging him to call Stone. Bannon replied, “I’ve got important stuff to worry about.”

Boyle continued to press: “Clearly he knows what Assange has.”

Boyle did not respond to messages seeking comment, though a Breitbart spokesman promised to release a statement later Thursday.

The next day, after Assange’s news conference via video link, Bannon followed up with his email to Stone. According to one person familiar with Bannon’s account to prosecutors, the exchange ended with Stone’s reply, in which he essentially repeated what Assange or his allies had already said publicly.

Three days later, on Oct. 7, Stone’s prediction of an October surprise came true when WikiLeaks unleashed a trove of emails hacked from the computer of John Podesta, Clinton’s campaign chairman. The disclosure came just a half-hour after the publication of a recording in which Trump boasted of grabbing women’s genitals and was an apparent attempt to divert attention from that explosive story, which threatened to derail Trump’s chances of capturing the White House.

The kind of case prosecutors might be trying to build against Stone is difficult to determine. According to people familiar with the inquiry, they are focused in part on whether Stone testified truthfully when he told the House Intelligence Committee a year ago that he had no “advance knowledge of the source or actual content of the WikiLeaks disclosures.”

Investigators are also examining whether Stone engaged in witness tampering or obstruction of justice stemming from his dealings with Credico, the people said.

In a statement this week, Stone again labeled Credico his source about WikiLeaks. Stone said Credico “was emphatic over a 50-day period, insisting that this ‘bombshell’ was coming” from WikiLeaks that would undermine Clinton before the election.

Credico has vehemently denied Stone’s account. Though he interviewed Assange in August 2016 for a radio show and visited him in London after the election, he has said he never conveyed inside information from WikiLeaks to Stone. The two men, once friends, have fallen out over the dispute. In one text exchange in May obtained by The New York Times, Credico told Stone, “You are an inveterate liar everybody knows that,” to which Stone replied, “You ain’t exactly George Washington yourself.”

Credico testified before the grand jury in September and has been interviewed in recent weeks by federal investigators. They are reviewing his communications with Stone, including emails and text messages, in which Stone told Credico not to talk to the FBI and to invoke his Fifth Amendment right not to incriminate himself before the grand jury, according to people familiar with the inquiry.

Investigators have also questioned Bill Samuels, a wealthy progressive activist in New York and a friend of Credico’s, in what appears to be an attempt to corroborate portions of Credico’s account, people familiar with the investigation said. Samuels once accompanied Credico to a media interview in which Credico asserted that he was not Stone’s link to Julian Assange.

Stone said he pressed Credico only to tell the truth. “I didn’t urge him to plead the Fifth, I didn’t urge him not to testify. He made those decisions on his own,” he said. He added that Credico was “furious” because he had identified him to the House committee as his WikiLeaks source rather than shielding him.

At various points, Stone has also suggested that he gleaned information about WikiLeaks from Jerome Corsi, a conservative journalist who trades in conspiracy theories. A lawyer for Corsi, who was also subpoenaed to testify before the grand jury, did not respond to a message seeking comment. Andrew Miller, another former aide to Stone, was also ordered to testify and is fighting the subpoena.

Mueller’s investigators have also delved into the operations of Stone’s political organizations. Stone has said investigators are examining a nonprofit educational fund called the Committee for American Sovereignty Education Fund, which he said produced a film alleging that former President Bill Clinton fathered an illegitimate child, a favorite theme of Stone’s.

The organization bills itself as a nonprofit, social welfare organization that has been designated by the IRS as a 501 (c)(4) group. But there is no indication in IRS records that it has that status.

Stone’s Oct. 4, 2016, email to Bannon suggested another reason prosecutors might be interested in the fund. Asking the campaign to promote his theory of an illegitimate son of Bill Clinton, he wrote: “I’ve raised $150K for the targeted black digital campaign through a C-4,” he wrote.

“Tell Rebecca to send us some $$$,” Stone added, apparently referring to Rebekah Mercer, a wealthy Republican donor close to Bannon. There is no indication that Bannon replied to him or sought out Mercer, and it is unclear whether Stone’s solicitation, alone, violated federal election laws. Stone said he was referring to a campaign targeting African-American voters.

Several advisers connected with another organization founded by Stone, Committee to Restore America’s Greatness, have been questioned before the grand jury in Washington — both about donations to the PAC and how the group’s money was dispersed, according to people familiar with the interviews.

The witnesses include Jason Sullivan, whom Stone hired as a social media specialist during the months before the election. Another is John Kakanis, an aide who carried out tasks for Stone as varied as driving him around and doing his accounting.

Kakanis is listed as the president of a Florida firm called Citroen Associates, which received $137,000 of the $561,968 that the super PAC spent in the 2016 election cycle. He has spent hours under questioning by prosecutors as the special counsel’s team tries to decipher how Stone used the donations.