Rocky Mount, N.C. — After 103 years on a grassy rise at Battle Park in Rocky Mount, a monument to Confederate veterans will come down. City council voted 6-1 Tuesday night in favor of removal after the words etched in the granite monument pricked the conscience of the crowd, drawing the attention of protesters.

On Sunday evening, more than 300 people rallied at the Confederate monument in Rocky Mount. The marker was sponsored by a Confederate veteran in 1917.

The crowd came to protest police brutality and racial injustice – the monument as backdrop was no accident. 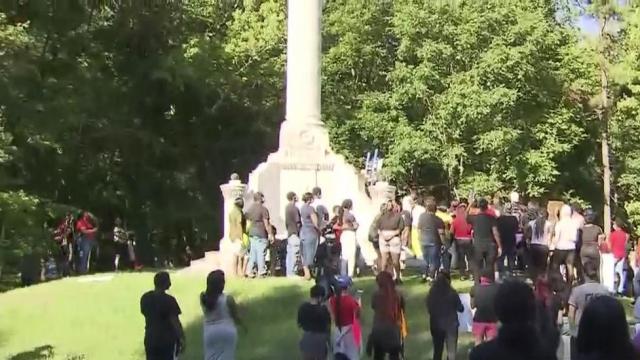 "It's a monument that represents a lot of pain for a lot of individuals in this community. In fact, I dare say, a majority of our resident population," said Mayor Sandy Roberson.

Roberson said the monument has long been a grievance among black residents, who make up a majority of Rocky Mount's population.

Roberson said the vote will be confirmed in an open meeting of the city council on Monday. He also said the plan is to remove the monument and store it somewhere. He was not sure if Tuesday's vote has standing but said the Monday vote would be official.

From Mayor Roberson: "It was originally given -- as I understand it, the monument and the land -- by the Ricks family. And that has been put in trust. And the city of Rocky Mount has been maintaining that site for many years."

Who will own the monument, land now?

According to Mayor Roberson, the land and monument were originally given by the Ricks family.

"That has been put in trust," said Roberson. "And the city of Rocky Mount has been maintaining that site for many years."

The land is to revert to Rocky Mount Mills, a corporation owned by the Battle family, that was dissolved in 2006.

The deed relates to the land, not the ownership of the monument.

The land will be vacated of the monument -- and the monument will be placed somewhere, but that location has yet to be decided.

"I hear a lot of conversation with folks who I think would be willing to relocate it just for the sake of public peace," said the mayor.

Reactions to the monument's removal

City council had considered moving the memorial in years past – but protests over the death of George Floyd have brought it to the forefront.

Since the city is the custodian of the monument, council members were also concerned about potential vandalism.

"I think in today's time, in today's environment, it's a very appropriate move that we make," said the mayor.

He said he wants to make sure the city has legal authority to move it before taking it down.

"I would just love for us to have somebody come to us and say 'I have a letter from the historical society that says you're clear. You can do whatever you want to with it.'"

The mayor said the monument would be placed in a warehouse until a suitable location could be found, likely on private property.

"It's an injustice what happened to Mr. Floyd, but that statue coming down won't change anything," he said.

The way this community sees it, removing the monument to Confederate veterans is small step in the right direction down a new path in history