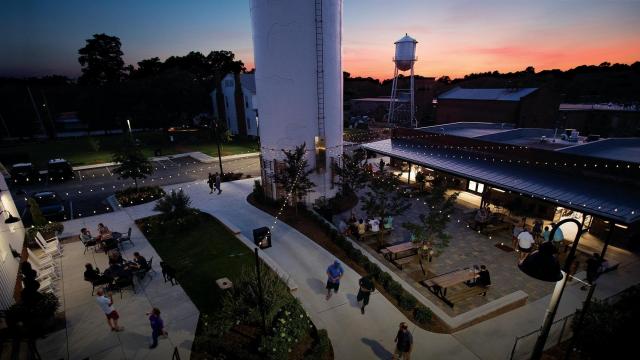 Rocky Mount boasts a rich history along the Tar River. Founded in the 1800s, one of the town's major catalysts of growth was the local mill along the river. Thought to be the second oldest cotton mill in the state, the Rocky Mount Mills was also the longest in operation until it closed its doors in 1996.

For years, the mill sat unused, the structure slowly wearing away along with the sometimes controversial history it carried. Just over ten years after shuttering, the mill and the surrounding mill village found a new owner.

Purchased by Capitol Broadcasting Company in 2007, the expansive property has undergone major transformations over the past 15 years — and luckily, CBC was no stranger to restoring and reinventing historic properties.

Capitol Broadcasting Company is the parent company of WRAL and WRAL Digital Solutions.

After their work with Durham's American Tobacco campus, transforming the historic tobacco factory complex into an expansive mixed-use destination, CBC used that newfound passion and tested experience to reinvent one of Nash County's most recognizable sites.

"We really loved community revitalization and historic buildings, and we saw this piece of property in Rocky Mount and were wowed. It has the natural wonder of the river and a history that's complex, but one that also plays an important part in the community's identity," said Michael Goodmon, senior vice president of CBC, the ownership and investment company of Rocky Mount Mills. "The vision of what to do can be complicated, because all communities are different, and all communities require different approaches and strategies. At the end of the day, we landed on emphasizing quality of life. It's all about the community of Rocky Mount and how they can enjoy the space."

While CBC purchased the property in 2007, development on the Mills didn't officially start until 2013. Since then, an expansive team has been involved in remodeling the space, being careful to preserve as much of the history and structure as possible in the process.

The mill was originally built through enslaved labor and owned by slaveholders, and CBC took intentional steps to shed light on the property's controversial history.

"We have worked hard to have that whole story told, partnering with the University of North Carolina at Chapel Hill to share that history," said Evan Covington-Chavez, the development manager for Rocky Mount Mills. "I think a typical developer would probably go in with their own ideas and build, but from the beginning, CBC has said, 'We're not going anywhere. We're a community partner, we're not in the business of  flipping properties. We can take this step by step- and that has made it a much more community-driven development that is continuing to unfold."

In order to keep focus on the community, the team at CBC brainstormed ways to revitalize the property that would bring the best increase in quality of life to the county.

While American Underground was able to capitalize on Durham's rich tech scene, the Rocky Mount Mills property was more of a blank slate. In the end, CBC landed on a crowd pleaser: beer.

"What we did see was that craft brewing was on the rise, so we decided to take a stab at creating a brewery incubator, the concept being that, if we provide the equipment, a brewer could come in and start their brewery and focus on marketing and fundraising, rather than real estate," said Covington-Chavez. "Equipment for a brewery itself can be half a million dollars, which is a tough thing to do if you don't know whether you're going to be successful or not. It was that idea of an incubator that got us started."

Rocky Mount Mills' first brewery, Koi Pond, opened its doors in 2015 and was also the first brewery to open in the town of Rocky Mount. Koi Pond's taproom, The Pond, anchors the corner of the campus, welcoming visitors and inviting them in to try something new.

While the brewery incubation may drive the initial appeal to the Mills, there's much more to the space beneath the surface. The complex also features local restaurants, office space, tiny home rentals, retail shops, and more. Currently, just over half of the 120,000 square feet of office space is filled by a wide array of tenants like Envolve Vision, the Poyner Spruill law firm, and the Eastern North Carolina headquarters of Teach for America.

The rest of the empty space is ready and waiting for future tenants.

"There's a joke I hear with almost every office tenant I've ever toured, whether it's the accountant, the graphic artist, the lawyer, whatever. Everyone says, “Their profession always goes well with beer.' Everything goes well with beer, it's a universal agreement," said Covington-Chavez. "In addition to office space ready for build-out, The Skylight suites offer tenants 200 square feet of turnkey space. You rent the space, you've got utilities and wifi included, there's a break area, a conference room, and all of that's included in the monthly $600 rent."

For the businesses that have already moved into the space, the unique atmosphere has helped not only with customer satisfaction, but also in bolstering recruitment and cultivating professional relationships with other tenants.

"The Mills' inherent mix of business, residential, and entertainment space creates a collegial atmosphere that promotes interaction among a wide range of people in the community, and surrounding oneself with good people is always a winning formula," said David Lavely, president and CEO of Envolve Vision, the largest office tenant in the Mills. "The Mills has allowed us to invest in our own community, helping reestablish economic vitality within the city at a facility developed as an environmentally conservative, green, sustainable site."

With such a large campus to work with, CBC didn't just stop development with breweries and office space. Rocky Mount Mills is also home to over 100 leasable residential units — some of these homes come equipped with a kegerator, keeping in theme with the brewery culture — and the Mill itself holds 67 apartments while the Village at Rocky Mount Mills offers residents village homes.

For those looking to spend a weekend visiting the area, they can always check the availability of River and Twine, the largest tiny house hotel of its kind in the world, nestled right along the Tar River. Each unit, equipped with unique furnishings and named after different bodies of water around Eastern North Carolina, is centered around a communal fire pit and gas grills.

Since it's all right at the Mill, visitors can also enjoy easy access to the collection of local businesses and recreation.

"You can order pizza and sit around the campfire, take your croquet set and play in the lawn, have a beer at Koi Pond, or get on the river and go for a kayaking trip, then end your day at the Mill. It's all right there," said Covington-Chavez. "We are home to several restaurants, both sit down and to-go, so we've added that additional place to land when you're in town. Plus, there's a 3.1 mile greenway that runs along the river, and Battle Park, which is right across the Mill on the river."

"I will always run into folks that are bringing friends or business clients over to campus," she finished. "People point to the mill as a source of pride, and as a quality of life component. It's a way to say, 'You don't have to drive to Raleigh to have fun — this is right here, and you get to be a part of that.'"

While the Mill still has plenty of room to grow and accept new tenants, both Covington-Chavez and Goodmon have been pleased with the community response and progress. Moving forward, they're continuing with the approach that's already proved successful: slow and steady.

Added Covington-Chavez, "If you look at our map of ownership, we've only just begun. We've basically completed about a third of the total property that we own, but we have about 180 total acres of land. I think we've challenged Rocky Mount's expectations to some extent. There's a greater sense of, 'If Rocky Mount Mills is working, then why couldn't I buy a building downtown and renovate it, too?'"