Rocky Mount, N.C. — The Rocky Mount City Council had an emergency meeting Tuesday to respond to a state audit that showed city officials bent or broke rules to help each other and left taxpayers on the hook.

The audit came after more than 200 calls were made to the state auditor's hotline.

Outside the Rocky Mount City Hall on Tuesday, signs appeared on the sidewalk: "Crooks on the Council," and "Andre Will Leave The Lights on For You." That's a reference to Mayor Pro Tem Andre Knight and the audit's finding that he never paid $47,700 dollars in utility bills and that various city officials wrote off the bills so his power wouldn't get cut. 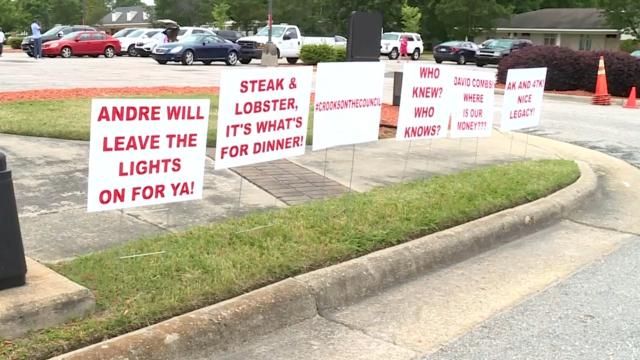 After the audit, Mayor Sandy Roberson called on him to resign and pay back the city. His supporters, some with "Make City Hall White Again" hats, stood outside to show support.

"This discrepancy was 0.0003 percent of the entire audit, so it's crazy they try to pull this out as a predominant finding," said Cooper Blackwell.

In Tuesday's specially called council meeting, members voted 7-2 on approving the corrective actions proposed by city officials. Knight reiterated what State Auditor Beth Wood called on the city to do.

"I have never sought or received special treatment or privilege," Knight said during the meeting. "Process, improvement and recommendation. That's what we have done. As far as I'm concerned, we need to move forward."

In addressing Knight's power bill write-offs, City Manager Rochelle Small-Toney said she has established a single, centralized department for utility bill collections that reports directly to her and is overseen by an internal auditor.

Small-Toney also was a focus of the state audit when she was found to have spent nearly $1,600 more than allowed for meals while traveling on city business – meals that included steak and lobster.

She said they were a reasonable accommodation for a medical condition.

The audit prompted Roberson to write a contract with the city, saying all council members will commit to ethical behavior.

"There's a lot of doubt in the community over this body, like it or not, it's the fact," City Council member Lige Daughtridge said. "We have to prove to the citizens of Rocky Mount that we are above reproach."

State auditors also determined the city's engineering department cost taxpayers an extra $31,000 by letting a developer halt work on a subdivision without finishing required upgrades. In response, the city has formed a Community and Business director who will report directly to the city manager.