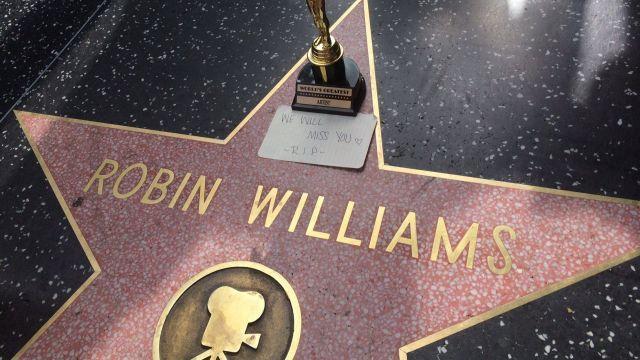 (CNN) — The intimate bond that comedians forge with an audience makes their loss feel more intimate and personal. What remains somewhat mysterious -- and at times mystifying -- is the darker side of stand-up, which has contributed to the premature deaths of so many comedy stars.

CNN tackles part of that in its latest iteration of the series "History of Comedy," with an episode titled, appropriately, "Gone Too Soon." HBO, meanwhile, is taking another deep dive into the tortured recesses of comedic genius, as the network follows its four-hour look at Garry Shandling with "Robin Williams: Come Inside My Mind," an equally personal (if half as long) dissection of the comic/actor who tragically died by suicide in 2014.

In much the way that Judd Apatow used Shandling's diaries to provide insight, director Marina Zenovich ("Roman Polanski: Wanted and Desired") draws upon audio interviews with Williams, providing access to his innermost thoughts and recollections through his own accounts. That's augmented by interviews with those who were close to him, including Billy Crystal, Eric Idle, and relatively press-shy figures like David Letterman and Steve Martin.

The documentary is further enlivened by outtakes that demonstrate not just the astonishing agility of Williams' mind, but how he fed off that process, to the point where unusable portions of "Mork & Mindy" tapings (including his profanity-laced riffs) were often way funnier than the show itself.

For students of television, it's also fascinating to hear about how Williams' improvisational style utterly flummoxed the cameramen working on the show, prompting producer Garry Marshall to add a fourth operator whose sole job was to follow the star at all times in order to catch his free-wheeling antics.

In what feels like a Hollywood cliché, Williams explosive success with that show brought with it all the attendant excesses, including philandering, drug use and the highs and lows associated with a huge hit, followed by the uncertainty of what comes next.

The biographical material here -- as articulated largely by Williams -- is also noteworthy, including his recollections about growing up lonely, attending an all-boys school, his first exposure to Jonathan Winters' madcap comedy on "The Tonight Show" and his attendance at Julliard, where his pals included "Superman's" Christopher Reeve.

Friends remember Williams as a "force of nature," but also reflect sadness associated with his death, from Crystal discussing the silly phone messages Williams would leave him to "Mork" co-star Pam Dawber recalling seeing him as a shadow of himself near the end.

That energy -- and the rich body of work that Williams left behind -- magnifies the sense of loss, as it does with many of the performers mentioned (Williams among them) in "History of Comedy."

As Conan O'Brien notes in the "Gone" installment of the special, "There's an intimacy to comedy, so that when they're gone, you miss it."

Tinged with nostalgia and emotion, "Robin Williams: Come Inside My Mind" conveys the messy complexities of the man, while serving as an unabashed celebration of his work.

By any measure, that's both a fitting tribute, and a contemplation of many layers that exist between the ebullient public personalities that fans see and the mass of contradictions and self-doubts that can lurk within. And yes, the trip inside Williams' mind is a reminder why such talents are missed long after they're gone, even by those who only knew them through the filter of a screen.

"Robin Williams: Come Inside My Mind" premieres July 16 at 8 p.m. on HBO. HBO and CNN are both owned by WarnerMedia.