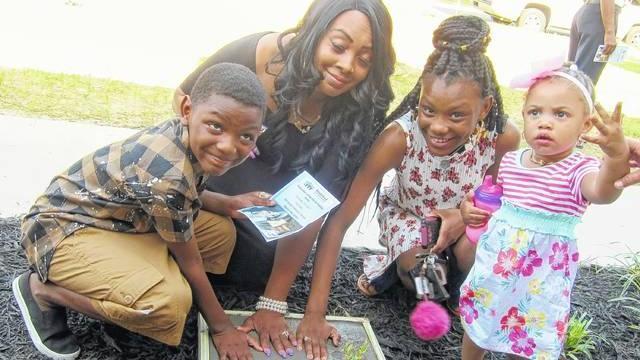 By Scott Bigelow, The Laurinburg Exchange

Dominique Davis will pay off the 1,300-square-foot home over 25 years, interest free.

It is the 48th home built by the Scotland County Habitat chapter, which is celebrating 25 years of building affordable homes.

"Because Robeson does not have a Habitat chapter, we volunteered," said Chris Carpenter, director of Habitat for Humanity of Scotland County. "Habitat chapters are stepping up across the state to accomplish the foundation's goal." 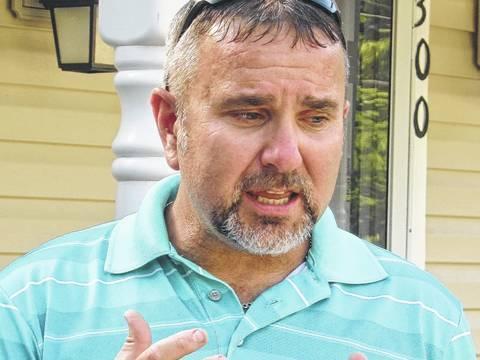 "We hope that people in Robeson County get excited about this project and start their own affiliate."

Davis and her three children, Diamond, 11, Zayeden, 7, and Londyn, 2, pressed their hands in wet cement outside the front door. Then, after a brief ceremony, the family received a Bible and the keys to the home.

The tearful new homeowner thanked everyone who had a hand in the project. She said the application process began last July, and she was approved in March.

"I can't thank God enough and my three amazing children," Davis said between wiping away tears. "You guys are the air that I breathe and the reason I will always strive for the best and never give up."

Carpenter said home dedication ceremonies are always joyful and meaningful for everyone involved.

"To see a family take ownership of their home, which will be their home forever, is magical," Carpenter said. "It's why we do this."

The Scotland Habitat chapter forged partnerships in Robeson County to accomplish its mission. The chapter bought building supplies at Pembroke Hardware and hired Maxton building contractor R.L. Locklear. County Commissioner Burlester Campbell and the town of Maxton worked with the project on permits and compliance issues.

The new homeowner also pitch in.

A part of the partnership agreement between Habitat and its homeowners is a commitment to put "sweat equity" into their new home and volunteer at the Habitat's ReStore, which supports Habitat projects through the resale of reclaimed construction materials and home furnishings. The new homeowners also take personal finance classes to better manage their money.

Davis was among a large number of applicants for the Maxton home, but she stood out as a candidate, Carpenter said. Davis is employed by the Scottish Pines Rehabilitation Center in Laurinburg, and she lived a few blocks from the new home.

The mission of Habitat for Humanity is to eliminate substandard housing and homelessness. Habitat was founded in 1968 at a religious community in rural Georgia, and its first home was constructed in 1969.

"We make no profit and charge no interest," Carpenter said. "The Bible that we give to new homeowners is symbolic of our Christian roots."

Habitat for Humanity of Scotland County was founded in 1992. Through partnerships with local governments, land was donated and construction took off. Planning is underway for49th house to be built in Scotland County to celebrate the 25th anniversary.

"I'd be happy to talk to groups in Robeson County on starting a Habitat here," Carpenter said.