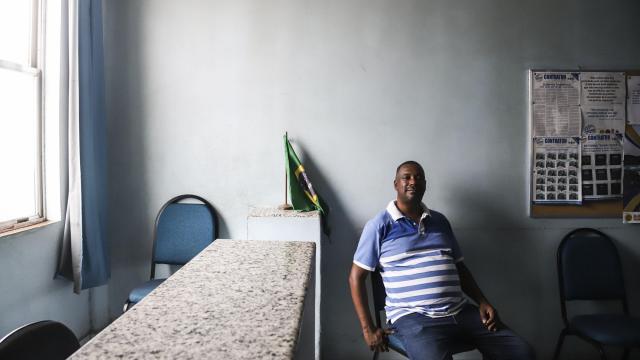 RIO DE JANEIRO — The elevator attendants are under no illusion: Their days are numbered.

Yet the few thousand operators in Rio de Janeiro who have clung on to their jobs well into the 21st century are hoping the forces of automation won’t entirely obliterate their trade, at least for a few more years.

“You’re never bored,” said Roselia da Conceição, 53, as she ferried passengers up and down a 23-story building in downtown Rio de Janeiro one morning, commanding her bouncy elevator from a tall stool.

“Because you’re always talking and interacting with people, you learn a lot and you create a type of intimacy,” she said.

While Rio de Janeiro may be best known for its fantastic beaches and hillside favelas, the city, which was Brazil’s capital until 1960, remains one of the country’s major business centers, and its downtown is crowded with high-rises and corporate headquarters.

In 1991, a state law made it mandatory for commercial buildings with five or more stories to employ elevator attendants, which is the main reason the city still has a small army of some 4,000 operators, said Sandro das Neves, one of the leaders of the elevator operator union.

Board elevators in all sorts of buildings downtown and you will be greeted, again and again, by attendants, some immaculately uniformed.

It feels as if you are stepping back in time for a few seconds, in a pleasant, yet also bewildering way.

The ride between floors becomes a chance for a brief, but sociable encounter — the sort of small talk that used to happen all the time at the grocery checkout line, the bank and the airline check-in counter before artificial intelligence and touch screens phased out those human interactions (and those jobs).

But the trade of elevator operator, which reached its global heyday in the age of telephone operators and has survived in Rio into the dawn of the driverless car era, may finally be fading away in this city.

Despite the law protecting the jobs of elevator operators, many lost their jobs in recent years as building managers cut costs during a period of economic recession that hit this city particularly hard.

Then came what will likely turn out to be the fatal blow. Earlier this year, a court struck down the 1991 law, siding with state lawyers who argued that the requirement posed unreasonable burdens on building owners.

Since then, das Neves said, the union, which once fought for better working conditions, is now simply devoted to survival.

“Our fight is not to raise wages,” he said, noting that elevators operators make about $290 a month. “It’s merely to keep attendants inside elevators.”

Manuel Fernandes do Prado, who at 77 is well past retirement age, is in charge of the lift at a building on President Vargas Avenue, the main street that crosses downtown Rio de Janeiro.

Fernandes, who has been in the business for more than 40 years, sometimes works back-to-back shifts in different buildings. He said he enjoyed tracking the lives of regulars as they age.

It’s easy to do when you see people daily, he said, often at predictable hours.

He notices when they walk in feeling chipper, when they seem upset, when something is wrong.

“Life is good when you work surrounded by people,” Fernandes said. Addressing a regular passenger, he asked, “Did you ever see me sad?”

Da Conceição said the job wasn’t quite as obsolete as it may seem.

Many elevators in the city are several decades old and have been repaired using custom-made parts since the models are no longer sold.

Keeping them operational requires someone who knows how to handle all the cranks, quirks and funny noises of the aging, fussy machines. And a steady hand when they malfunction, as they often do.

“When an elevator breaks down, the only person who can’t panic is the operator,” she said.

That speaks to a phenomenon Jacob Carlos Lima, a professor of sociology at the Federal University of São Carlos in São Paulo, has studied in several sectors of Brazil’s economy. While some factory jobs have been eliminated by technological advances, poor infrastructure has spared several occupations, he said.

“Automation in Brazil will be limited by deficient infrastructure,” he said. “What good is a driverless car if we’re gridlocked on top of an overpass?”

Da Conceição said the job certainly had downsides. Being confined to the small, windowless cube for hours has taken a toll on her figure.

“When I started, I was thin,” she said, laughing. “Look at me now, I’m older and voluminous.”

But it’s a job she’d love to continue doing for at least seven years, when she’ll be eligible to retire.

“The profession is going to end,” she said, sighing. “And when you’re over 50, you can’t easily get another job.”