Rights Prize Goes to Oleg Sentsov, a Russian Prisoner, in a Rebuke to Putin 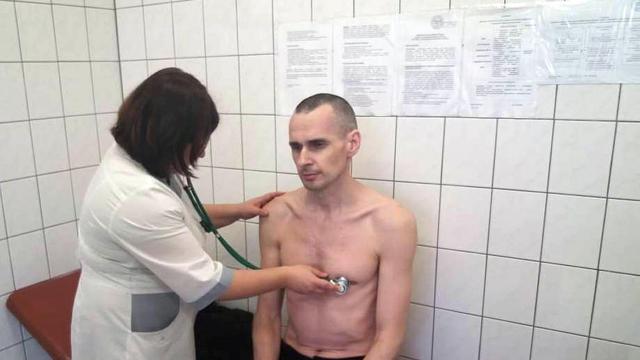 MOSCOW — The European Parliament on Thursday awarded a prestigious human rights prize to a Ukrainian prisoner serving a 20-year term in a penal colony in Siberia, drawing renewed attention to political detainees in the far-flung prison system once known as the gulag.

The award, the Sakharov Prize for Freedom of Thought, is an embarrassment for the Russian government but also elevates the prominence of the prisoner, Oleg G. Sentsov, raising his value in a possible prisoner exchange.

The Russian authorities detained Sentsov, a movie director, in Crimea in 2014, soon after the Russian military seized the peninsula. He was accused of plotting to blow up bridges, power lines and a statue of Lenin.

Sentsov denies plotting violent actions, but openly admits opposing Russia’s annexation of Crimea. He went on a hunger strike over the summer and was kept alive for 145 days by medical intervention.

The European award, named for the Soviet physicist and dissident Andrei D. Sakharov, is granted annually to “individuals or organizations who fight for human rights and fundamental freedoms.”

Sentsov joined rights icons like Nelson Mandela and Malala Yousufzai in receiving the prize, which has been awarded since 1988.

Sakharov, a Nobel Peace Prize recipient, nominated the first laureate, Anatoly Marchenko, a dissident who won the award posthumously after dying during a hunger strike in a Soviet prison two years earlier.

The president of the European Parliament, Antonio Tajani, said Sentsov had been chosen for “courage and determination” in his life-threatening hunger strike that made him “a symbol of the struggle for the release of political prisoners held in Russia and around the world.”

The prize also shines a light on the politics of detainees in the Ukraine crisis. The authorities in Moscow justified Russia’s annexation of Crimea on the basis of a referendum conducted in the euphoric aftermath of Russia’s stealthy invasion of the peninsula. A flurry of arrests followed, cementing Russian rule and making clear that lingering pro-Ukrainian views would be seen as sedition.

The detainees also became bargaining chips. Since the annexation and Russia’s military intervention in eastern Ukraine, Ukraine has exchanged hundreds of prisoners with Russia and pro-Russian separatists. Supporters of Sentsov have suggested trading him for a Russian state news agency journalist arrested in Ukraine for treason.

The unacknowledged Russian military invasion exposed Russian soldiers to capture, arguably without the protections of the Geneva Convention for prisoners of war, meaning they could be subjected to Ukrainian criminal prosecution if not traded.

In 2016, President Vladimir Putin of Russia exchanged another high-profile Ukrainian prisoner, Lt. Nadiya V. Savchenko, whose profile was raised in detention by her absentee election to the Ukrainian Parliament, for two captured officers of the Russian military intelligence service known as the GRU.

The European Parliament, in announcing Sentsov’s award, said Russia was holding about 70 Ukrainians arrested in Crimea and sentenced to long prison terms. The European group said they are political prisoners.

Ukraine’s foreign minister, Pavlo A. Klimkin, welcomed the award for Sentsov and suggested it would harm Russia’s standing in the world by drawing attention to political prisoners, as Sakharov’s internal exile did for the Soviet Union in the 1980s. Sentsov, he wrote on Twitter, “will become for Russia what Sakharov became for the USSR.”