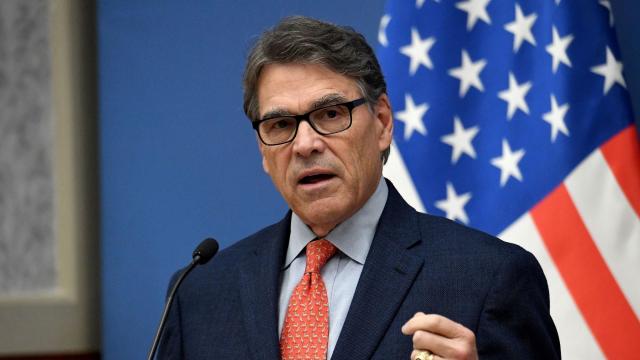 CNN — Energy Secretary Rick Perry said on Thursday that he plans to leave his post later this year after he informed President Donald Trump of his intention to resign.

Perry said in a YouTube video posted Thursday night that he planned to announce his resignation, without giving an exact date. Bloomberg was first to report on Perry's resignation.

"There is much work to be done in these upcoming weeks and I remain fully committed to accomplishing the goals that I set out to accomplish at the beginning of my tenure," Perry said in the video.

Perry has found himself as one of the players in the middle of the controversy stemming from a whistleblower's allegation that Trump asked Ukrainian President Volodomyr Zelensky to investigate former vice president and 2020 Democratic presidential candidate Joe Biden and his son, and that the White House attempted to cover up the conversation. There is no evidence of wrongdoing in Ukraine by either Biden.

Trump said he knew who he wanted to name as Perry's placement and teased announcing it during Thursday's rally.

Perry's resignation comes amid scrutiny over his role in the Trump administration's dealings with Ukraine. White House acting chief of staff Mick Mulvaney confirmed Thursday that the President asked Perry to work with Trump's personal lawyer, Rudy Giuliani, on policies related to Ukraine, but Mulvaney denied that their work was part of a "shadow foreign policy" effort. Perry was one of the "three amigos" leading US relations with the country, meeting three times with Zelensky.

Perry told the Wall Street Journal Wednesday that he spoke with Giuliani at the President's direction this spring about alleged Ukrainian corruption.

Perry told the newspaper that Giuliani didn't make explicit demands on the call, but did blame Ukraine for the Steele dossier about Trump's alleged ties to Russia, claimed the country had former Secretary of State Hillary Clinton's email server and linked Ukraine to unfounded evidence that helped send former Trump campaign chairman Paul Manafort to prison.

Perry also disputed claims that he was planning to leave the administration. At the time, he wouldn't state if he was planning to stay in his role past Thanksgiving. He faces a deadline Friday to comply with a congressional subpoena as part of the ongoing impeachment inquiry.

Multiple people associated with Trump inside and outside the administration told CNN that the energy secretary was among those engaged in efforts to change leadership at Naftogaz, Ukraine's geopolitically important state-owned oil and gas company.

During his May trip to Kiev for Zelensky's inauguration, Perry delivered a list of four candidates to replace the existing American member of Naftogaz's international supervisory board, according to a source familiar with Perry's conversations.

Perry's goal, the former official believed, was to replace the current American representative, Amos Hochstein, with someone more known and favorable in Republican circles.