Rick Bright plans to start new coronavirus treatments position, but his exact role is in dispute 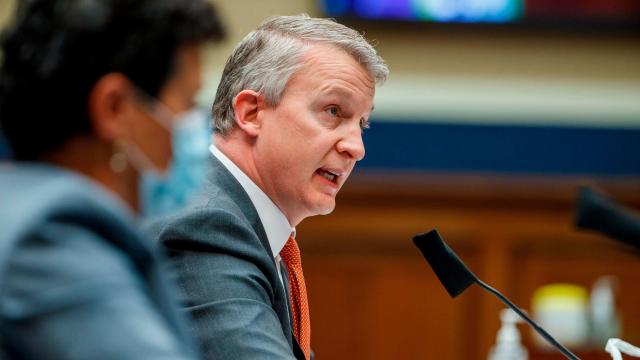 CNN — Rick Bright will start his new job in a role inside the federal government's coronavirus response next week, his attorneys said Thursday.

While a Department of Health and Human Services source initially told CNN that Bright has been offered the job of second-in-command of the Accelerating Covid-19 Therapeutic Interventions and Vaccines partnership, a National Institutes of Health spokesperson later said he will be a senior advisor to the NIH director on diagnostics. The spokesperson said Bright will assist Dr. Francis Collins, the NIH director, "in standing up the Rapid Acceleration of Diagnostics Advanced TECHNOLOGY Program," which is "focused on the rapid scale up of advanced testing technologies."

Bright's lawyers said in a Thursday evening news release that he plans to report to that job next week now that it has been identified.

"Contrary to administration talking points, Dr. Bright has never refused to report to NIH, and now that his position there has been identified, he plans to begin next week," the attorneys said in a statement. "Dr. Bright is fully prepared to step into this new role unless Secretary Azar honors OSC's request and grants a stay of his reassignment."

Amid the confusion over his new role Friday, Bright's attorneys disputed that he was offered a job related to vaccines at the NIH.

"The only position Dr. Bright has been offered is that of Senior Advisor at NIH focusing on diagnostic strategies," Debbie Katz told CNN. "He has not been offered the position 'Accelerating Covid-19 Therapeutic Interventions and Vaccines partnership.' In fact, he was told expressly that the new position would not involve vaccines, which is, of course, his area of expertise."

HHS did not immediately respond to a request for comment Friday. The White House press secretary also did not elaborate when asked what his exact role will be.

In response to his allegations of retaliation and a slow federal response, HHS said in a statement Thursday that Bright had not shown up to work despite receiving the same salary he did in his former role.

"His whistleblower complaint is filled with one-sided arguments and misinformation. HHS is reviewing the complaint and strongly disagrees with the allegations and characterizations made by Rick Bright," an HHS release said.

Bright has been locked in a public war of words with HHS since being removed from his role as the leader of the Biomedical Advanced Research and Development Authority. He has alleged that he was removed from his post because he was critical of the administration's response to the coronavirus pandemic and opposed the use of a drug frequently touted by President Donald Trump as a potential treatment.

He has filed a whistleblower complaint alleging his dismissal was retaliation, and the federal office looking into the ouster has said he should be reinstated while the investigation proceeds, according to his attorneys.

HHS has repeatedly said Bright was reassigned to a new role in the coronavirus response and that he was refusing to show up for that job, while he and his attorneys maintained he had not been given the details of that role. Bright said he was locked out of his HHS email when he was removed as the director of the biomedical authority.

In a Thursday interview on CNN's "The Lead with Jake Tapper," Debra Katz, one of Bright's attorneys, said of her client, "When he was removed from his position, there was no position that they were actually sending him to."

"Nonetheless, while on leave he has been working with leaders in NIH to understand the details of his new position and preparing for this hearing," the attorneys said, referring to Thursday's high-profile Capitol Hill hearing in which Bright warned that "2020 could be the darkest winter in modern history" without the development of countermeasures to the novel coronavirus.

Bright's new role on the Covid-19 partnership, under the National Institutes of Health, was described as specific and legitimate by the HHS source. The source added that early versions of plans made by the administration had Bright playing a critical role in Operation Warp Speed, the name of the administration's push to develop and produce a vaccine for the coronavirus.

That role seems unlikely now, the source said, adding that the National Institutes of Health was very eager to have Bright in the job.

Bright's attorneys announced he plans to return to work next week hours after Trump tweeted Thursday morning that Bright was someone who "should no longer be working for our government!"

UPDATE: This story has been updated with additional comments and developments on Friday in which Bright's attorneys and an NIH spokesman disputed the exact role Bright will have.