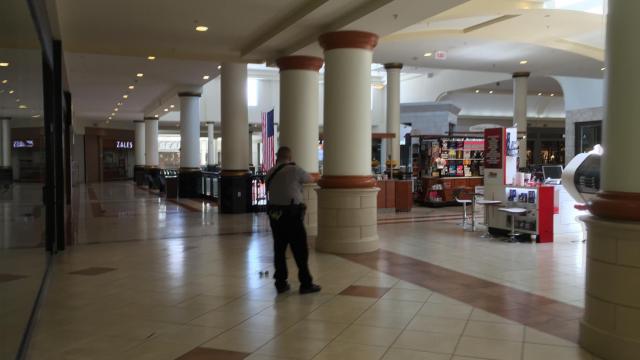 The first indication for me that something was wrong in the food court on the second level of the Crabtree Valley Mall was the vibrating floor. My thoughts immediately went to exit route options.

Growing up in southern California, I know that rolling shake well. It also brought back memories of the 2011 earthquake centered in Virginia which was felt in our area. But this was more intense.

It was no earthquake but a stampede of panicked people running for the exits.

Panic at Crabtree valley mall as crowds run for the doors. I'm locked in @thinkgeek hunkered down with my family

Fred Rogers once said, "When I was a boy and I would see scary things in the news, my mother would say to me, 'Look for the helpers. You will always find people who are helping.'"

From police officers inside sweeping the mall, to firefighters and EMS outside tending to injuries sustained in the panic, to mall and store employees, to GoRaleigh bus drivers who offered a cool place for shoppers to wait to return to their vehicles as the heat index exceeded 100 degrees, to random people who took time to show strangers kindness during a stressful time, Raleigh was full of helpers on Saturday.

The manager and employees of the newly opened ThinkGeek store sprung into action, locking the main gate and herding customers into the back of the store with instructions to get and stay down. As we waited, employees and customers calmed each other with a hug or just a simple thumbs up. Customers report similar experiences in stores throughout the mall.

Adults helped reunite children and parents. Children instinctively called upon school lockdown drills, instructing their parents along the way. A mall official who happened to be in the store at the time provided what information he could.

Sarah Cullen of Raleigh, who was sitting with her sister across from my family during the lockdown, eagerly fished honey sticks from her purse for a diabetic customer experiencing low blood sugar.

Once my 15-year-old son had assured his mother sufficiently that he was fine, my wife turned her attention to a very upset young lady who needed a surrogate mom for a few minutes.

If you were in the food court Saturday and are missing a purse or cellphone left on a table in the rush, check with the ThinkGeek store. A kind person thought to gather these items and deliver them to the closest place they could be secured.

Mall officials will be on hand Sunday beginning at noon in the community room at Highway 55 in the food court helping reunite shoppers with their things. Shoppers can also call the mall office after noon on Sunday at 919-787-2506.

As customers and employees turned to their phones for some clue about what was happening, it didn’t take long for misinformation to begin flowing in via social media and texts.

Armchair CSIs placed a shooter or various numbers of shooters in various places around the mall. Another insisted an explosion was the cause. One young man a few feet away from me loudly insisted we leave because of a text from a friend suggesting it was a "gas leak." Cooler heads prevailed as he was just as loudly told that we would be following first-hand instructions from police on the scene, not third-hand information of unknown origin.

Within an hour, a line of Raleigh and Wake County officers, weapons drawn and covering every corner and stairwell, hurried us to the exit.

We are out of the mall, Raleigh PD evacuated stores in the food court area pic.twitter.com/QxvE4QuGYb

One even pointed out drinks that had been spilled in the panic to ensure no one slipped.

As my family and I found our way to our car and out of the mall parking lot, we passed a pregnant woman, overcome by the events and the heat, being assisted by employees of the mall’s Highway 55 restaurant. They provided her water and stayed with her while EMS arrived.

Crabtree Valley Mall will be open for business on Sunday from noon to 7 p.m. I can't help but think of the smaller stores, not the chains but the mom-and-pop storefronts and kiosks. A few days of reduced income can be enough ruin a small business. When the mall opens, don't forget them.

Tony Rice is a volunteer in the NASA/JPL Solar System Ambassador program and a regular contributor to WRAL.com. You can follow him on twitter @rtphokie.