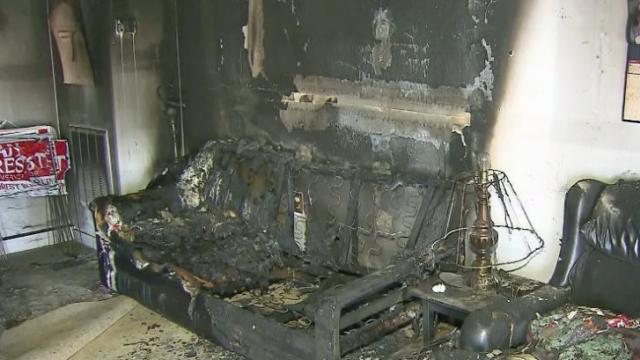 Hillsborough, N.C. — The reward for information that leads to an arrest in the firebombing of the Orange County Republican Party headquarters a year ago is now up to $20,000.

A Molotov cocktail was thrown through a front window of the GOP office, at 347 Ja-Max Drive in Hillsborough, in the early hours of Oct. 16, 2016, authorities said. Graffiti that included a swastika was spray-painted on an adjacent building.

No one was injured in the incident. The fire burned itself out, but the office sustained heavy damage.

The FBI said Monday it was offering a $10,000 reward, while the North Carolina Republican Party was adding a $5,000 reward to the $5,000 the state previously offered in the case, which is being investigated by the Hillsborough Police Department, the FBI, the State Bureau of Investigation, the Orange County Sheriff's Office, the federal Bureau of Alcohol, Tobacco, Firearms and Explosives and the U.S. Secret Service.

The FBI said the investigation identified a vehicle at the Daniel Boone shopping center at about 2:55 a.m. on Oct. 16, 2016. The vehicle passed all of the businesses that were open at that time of night and headed in the direction of the Orange County GOP office. Before it was at the shopping center, the vehicle was traveling north on N.C. Highway 86 and passed under Interstate 85.

No description of the vehicle was provided, but in a search warrant issued in February to obtain GPS data from Google for any cellphone within 150 meters of the GOP office that night, authorities said a light blue, older-model Nissan or Toyota Supra was seen parked in the area for about 10 minutes between 3:30 and 4:30 a.m.

"Somebody out there knows something about somebody," said Waddy Davis, chairman of the Orange County Republican Party. "I think we’re looking for closure. We’re hoping that somebody out there will remember and bring forward to the authorities, the federal, state or local authorities."

"We’ve changed a lot of the things we do in the headquarters here," past county GOP Chairman Daniel Ashley said. "We try to have at least two people here at all times working with one another, where before one person could go solo."

The FBI said investigators also are seeking information to determine whether the firebombing is connected to vandalism that occurred in Carrboro in September 2015. The victim in that case was described as "an outspoken activist" who might have been targeted by the same people who attacked the GOP office, authorities said.

Anyone with information about either crime is asked to call the FBI Charlotte office at 704-672-6100.