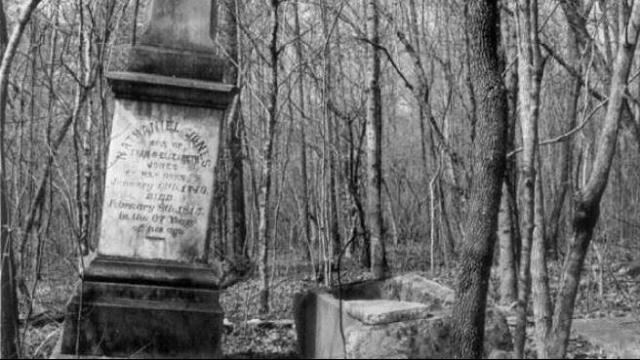 Many locals might be surprised to discover how often they pass old, overgrown graveyards without even realizing it. Cary, for example, has multiple tiny cemeteries from the 1700s or 1800s tucked away alongside well-known suburban streets like Lake Pine, Seabrook Avenue and Cornwall Drive.

There's even a tiny grave site in the middle of a concrete parking lot in downtown Cary.

When locals first stumbled upon the burial site of prominent Cary leader and Revolutionary War patriot Nathaniel Jones, it was found in very poor condition, completely covered by overgrowth. 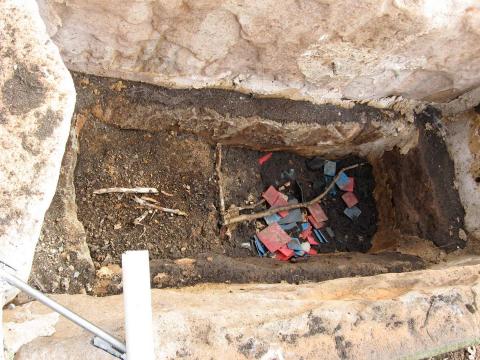 Barbara Wetmore, a Cary historian who wrote extensively about the cemetery's history, described the state of abandonment, saying, "The foundation was still there for what once held a wall, or perhaps an iron fence, but the fence was gone."

Wetmore also described multiple unmarked stones, saying that aside from the obelisk and box tomb, "No gravestones in the cemetery bore any legible writing."

"Six or seven plain marble markers were counted inside the cemetery and five slender unmarked stones were found," she said. 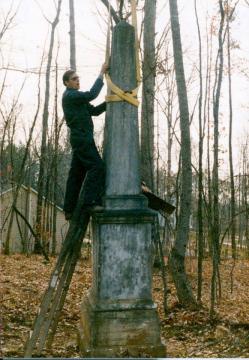 How did such a historic burial site with Cary leaders become lost?

"He served as a Wake County Commissioner, Justice of the Peace, Sheriff, Clerk of Court, member of the General Assembly and delegate to the Constitutional Convention in Hillsborough in 1788," said Wetmore.

In fact, his land almost became the capital of North Carolina. "In 1792 he offered his land, but land owned by Joel Lane was eventually selected in nearby Raleigh," said Wetmore. 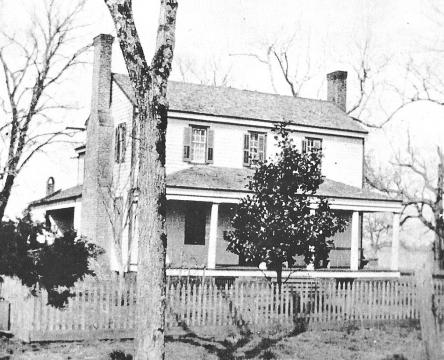 He named his house and property White Plains, a title that described the fields of cotton surrounding his home. His historic house survived for generations, standing at what is today the intersection of Walnut Street and Greenwood Circle, before being demolished in the 1950s.

Wetmore said the burial site likely began with the death of one of their children in the late 1700s. Although the earliest date that appears on an intact grave is 1815, history tells us multiple children passed away before the 1800s. Robert Jones, born in 1773, died only seven years later in 1780.

Evan Jones' life was even more brief, dying a mere two years after his birth in 1778. 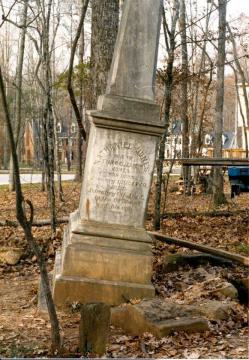 The grave site was at least a mile from their homestead, indicating they likely rode horses through fields of cotton to visit their buried loved ones.

White Plains took up a large portion of what is now eastern Cary. But as Cary rapidly developed, family farmland tracts disappeared, developing into neighborhoods and shopping centers. That rapid shift is likely why Cary has so many hidden, historic cemeteries in unusual places.

Today, the Friends of Page-Walker and Town of Cary protect and preserve the historic cemetery. Volunteers visit and clean the site regularly. However, many locals still have no idea they are driving past a piece of Revolutionary history older than the town itself.

WRAL's Hidden Historian explored hidden, pre-Revolutionary cemetery on Facebook Live, showing little-known secrets hidden in the graveyard and delving into the stories behind it.

WRAL's Hidden Historian is a 7th-generation North Carolinian and 5th-generation Raleighite, who is passionate about ensuring local history isn't forgotten.

She recently explored NC's 'secret garden' in an old gothic churchyard in Tarboro.

She also crawled around in a hidden underground tavern, abandoned beneath downtown Raleigh.

For more Cary history, follow Friends of the Page-Walker on Facebook. All photos for this story supplied by them.