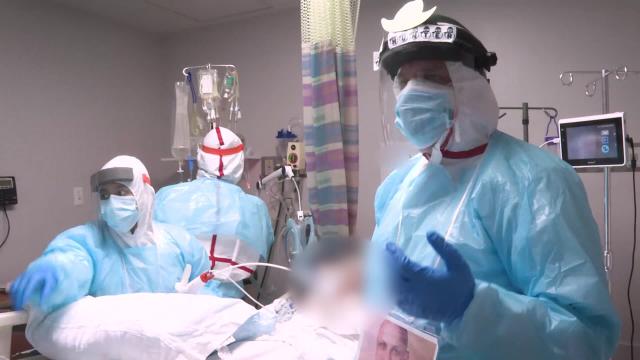 CNN — In June, Houston's United Memorial Medical Center was so overwhelmed by the pandemic that two of its wings had been transformed into Covid-19 wards.

Now, there are three.

Back then, ICU nurse Tanna Ingraham was fighting the disease herself, after getting it from a patient, she thinks.

From bad to worse, this hospital is a perfect microcosm of how the disease is escalating -- even as vaccines are being rolled out across the country.

"The next six weeks are going to be the darkest weeks in modern American medical history," Varon says. "We are right during Christmas where people are not listening."

Cases are exploding across Texas. The seven-day average of positive cases is at a record level -- averaging over 16,000 daily new cases, according to Johns Hopkins University. This average is up 15% compared to last week.

About 40% of Covid-19 patients at the hospital are from other parts of the state reeling from the pandemic.

Walter Cuellar was transferred from West Texas, about 500 miles away. He thinks he and his wife picked up the virus at the supermarket. She had mild symptoms. Today, he's on the mend but when he arrived was nearly put on a ventilator.

"Where I live, there are a lot of people where they don't wear the mask," he says. "There's been a lot of times I go to the store with my wife and she and I were the only ones wearing a mask and other people weren't wearing a mask at all."

Bri Smith works with foreign exchange students and recently moved to Columbus, about 73 miles west of Houston. The wife and mom of three also thinks she got the virus while shopping.

"It is the worst I have ever felt in my life," Smith says. "The aches and the pain."

Varon says patients are coming in sicker now, after having waited longer to seek medical care.

"Our average patient has spent about 20 days with symptoms before they come to us," he says. In the past few months, the hospital has utilized different means of treating the illness.

Richard Gonzales thought he could tough it out, so he resisted for a week going to the hospital. He works two jobs, has a wife and five kids, and isn't sure how he got the virus.

"I kinda messed up 'cause those symptoms that I got, when I got it, I should have gone to the hospital or ER right away, but I didn't. I laid in bed thinking it would go away."

For Varon and the staff, the frustrations keep mounting.

"Even if I give them holy water, it's going to be difficult for them to get better," Varon says.

Varon -- who has been dubbed the "Covid hunter" and has car license plate that says the same -- was first to get the Moderna vaccine on Monday to assure staff and the largely minority community that the vaccine is safe.

Dr. John Okereke, director of emergency services, also was vaccinated. He is Black and says it is critical for minorities to seek treatment and take the vaccine when it's available.

Okereke says the doctors are "ecstatic" about the vaccinations.

"When you watch on the television, you don't really know what the doctors are going through," he says. "You have no idea what we go through. Sometimes we are really afraid of catching the disease."

The vaccines couldn't come at better time. Hospitalizations have continued to climb across the state, with 10,000 patients as of Monday, according to the COVID Tracking Project -- a level not seen since July.

Texas has recorded 113,049 total new Covid-19 cases in just the last seven days, according to Johns Hopkins. This is the second-highest state total, behind California.

Ingraham, the nurse, says she is stressed by the ongoing fight against the disease, and she has a message about the toll it has taken on her and others at the hospital.