Review: The Boston Symphony Joins a Crowded Field of Mahler 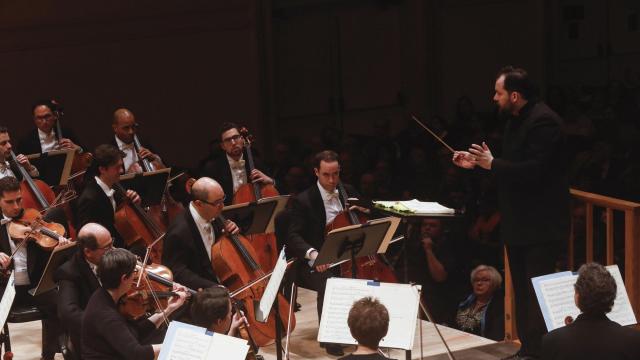 NEW YORK — It’s hard to imagine a time when Mahler’s music was obscure.

His Fifth Symphony alone keeps popping up. Jaap van Zweden chose it to make a statement last season, when he was the New York Philharmonic’s music director designate. The Los Angeles Philharmonic has played it twice this year. And on Monday evening it showed up at Carnegie Hall, in a concert by the visiting Boston Symphony Orchestra.

In a crowded field of Mahler, what do the Bostonians and their music director, Andris Nelsons, have to offer? The answer, at Carnegie at least: nothing more than the most by-the-book reading possible.

To some degree, this should be expected of the Boston Symphony, an orchestra that is skilled but not showy. Throughout the Mahler, the brasses were in excellent form, and the strings never gave into hysteria. But Nelsons’ measured account of this frenzied work — which typically runs about 70 minutes but approached 80 on Monday — often came off as timid, even ponderous.

This respectable inoffensiveness might have been more satisfying had I not heard Susanna Malkki lead a mind-opening performance of Mahler’s Fifth with the Los Angeles Philharmonic earlier this month. The symphony is episodic; hearing it is like binge-watching an entire season of a TV melodrama. But under Malkki’s baton it had the cohesion of a novel. The Philharmonic musicians followed her faithfully, adding insight after insight to an overplayed work. And she brought out inner voices that retreated back into anonymity in Nelsons’ interpretation.

The Boston Symphony once again excelled in its programming. (Something to look forward to: its spring engagement at Carnegie, which will include the New York premiere of a piano concerto by Thomas Adès.) It prefaced the Mahler with HK Gruber’s 1999 trumpet concerto “Aerial,” a piece that ends much as the symphony begins and shares its stylistic diversity, unwieldy spirit and, ultimately, Viennese character.

The soloist was Hakan Hardenberger, for whom the concerto was written. He was red-faced as he bravely juggled the piece’s multiple solo instruments — a standard trumpet in C, a piccolo one in B flat and a cow’s horn, resting next to him on a Steinway piano bench — and its comically extreme dynamic marking of “ffff” (fortissississimo).

“Aerial” suggests a vantage point, and the texture of this evocative concerto delivers on that: The first movement, “Done with the compass — Done with the chart!,” named after an Emily Dickinson poem, conjures a chilly Arctic landscape. The soloist is asked to create multiphonic sound by playing one note, vocalizing another and, through the magic of acoustics, summoning a third; the effect is like wind sneaking through the cracks of poorly insulated windows in winter.

Like many works by Gruber, “Aerial” also dabbles in popular idioms. The trumpet’s mute adds a touch of Lynchian noir. And in the second movement, “Gone Dancing,” the orchestra breaks into a raucous party. Nelsons and the Bostonians maintained precision while relishing this finale’s inconstant rhythms — dances that capriciously recalled golden-age Hollywood and the Middle East. Where was this adventurous energy during the Mahler?